Forget Brexit as the core challenge facing agriculture in Ireland over the coming years. Given the scope of the recent reports on climate change from the UN, dealing with the fast-changing demands on how the world produces its food, environmental sustainability will be the real nut to crack for Irish farmers as they plan ahead, writes Richard Halleron.

Worryingly, the UN is calling for a move away from animal-based food production systems. This is a policy shift that does not fit in with the agribusiness models followed in Ireland, given farmers’ strong reliance on beef, dairy and sheep production systems.

At the same time, it’s far from bad news, given Ireland’s reliance on grass-based production systems. In fact, it could be argued that Ireland has always hidden its light under a bushel, where this is concerned. The reality is that long-term pasture represents a ‘carbon sink’ of immense proportions.

However, it’s now certain that Irish farmers and their representatives will have to tell the world just how good our grass-based production model really is, from a climate change perspective, that’s if we want to continue as is in regard to farming.

The other reality, of course, is that Irish farmers do not have an alternative to grass. It is the country’s greatest asset and one that must be developed sustainably over the coming years. All the research carried out over recent decades confirms just how much Irish farmers can add to the value of the country’s farming output simply by making better use of grass and silage.

This can be achieved in ways that do not in any way compromise the targets set within the latest climate change recommendations from the UN, but, again, unless Ireland tell the world this is actually the case, the country’s cause could be lost amid the general clamour that will surely follow to put further pressure on animal-based production systems.

Production agriculture employs many thousands of people in those areas of the country where jobs are needed most. Moreover, the sector underpins the entire food processing sector, another key component of the Irish economy. There is too much to risk by not actively participating in the climate change debate. The time to start arguing these points is now, not in a decade’s time when the real decisions on how the world reacts to global warming have already been taken.

Adding to the concerns of Irish farmers will be the recent report from the EAT–Lancet Commission, which has put international pressure on red meat consumption levels. Specifically, it cites red meat as being unhealthy and recommends that consumption of beef should be reduced drastically both as a means of improving human health and countering the challenge of global warming. Eating one steak a month or one hamburger per week are cited as acceptable levels of red meat consumption for the future.

The Commission convenes leading global researchers from diverse scientific disciplines. Their mission is to advance the development of scientific targets for healthy diets from environmentally sustainable food production.

According to the report, international food systems have the potential to nurture human health and support environmental sustainability. Changes in food production and consumption patterns will be required in order to make this a reality, with the publication addressing the need to feed a growing global population a healthy diet while also defining sustainable food systems that will minimise damage to our planet.

The Commission quantitively describes a universal healthy reference diet, based on an increase in the consumption of healthy foods (such as vegetables, fruits, whole grains, legumes, and nuts), and a decrease in consumption of unhealthy foods (such as red meat, sugar, and refined grains) that would provide major health benefits, and also increase the likelihood of attainment of the sustainable development goals. 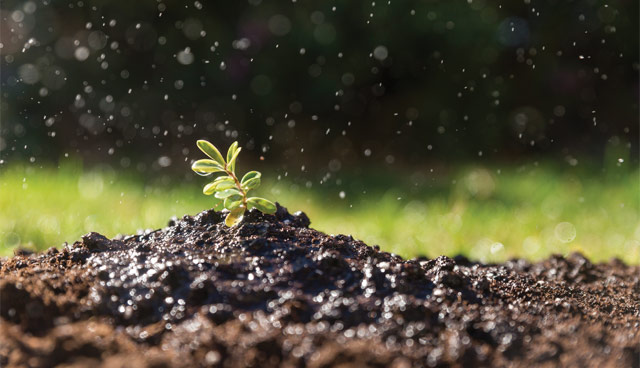 Teagasc director Gerry Boyle is quick to confirm the challenge of global warming facing Irish farming. He says: “At present, with the uncertainties in world affairs, we need to improve our energy security by reducing our dependence on fossil fuels. In the longer term we need to tackle global warming by reducing the level of greenhouse gases in the atmosphere.

“At an individual farm level an investment in energy efficiency or renewable technologies will reduce the high cost of energy inputs. It will also give a green image to our production that is of increasing importance in the market-place.”

The Teagasc director adds that global demand for food will rise over the coming decades due to increasing population, income and per capita consumption trends. “This global landscape presents opportunities and challenges for food producers in Ireland at all levels from the larger export-oriented companies to the smaller local producers.

“Ireland’s food system at national and local level cannot be isolated from these global challenges. Indeed, global food supplies and prices are of growing importance in all countries and food security in Ireland will increasingly have to be addressed within a global market place through the development of a more innovative and competitive industry.”

Boyle says that this will require action at all levels of the food system, with high quality research and innovation critical in meeting these challenges, as well as promoting a thriving business sector to increase economic productivity and sustainability.

Meanwhile, Ireland’s Minister for Agriculture, Food and the Marine Michael Creed TD recognises that the country’s economy is heavily reliant on agriculture. Speaking at the December 2018 COP 24 climate change conference in Poland, he said that Irish agriculture has been very successful at decoupling emissions from output. He adds: “I am very aware that in recent years we have seen an increase in our overall emissions. The Irish Environmental Protection Agency has recently published the latest provisional greenhouse gas emissions figures and has confirmed a trend of increasing agriculture emissions.

“Reducing emissions is challenging and it is a challenge the sector must engage with. While we already have an efficient and productive agricultural system, there is no room for complacency. We must continue to make improvements in terms of sustainability and environmental performance on all our farms.”

With regard to what Ireland is doing in order to address the climate change challenge, the minister confirmed that that agriculture must be part of the solution.

“It has a key role to play in transitioning to a competitive, low carbon, climate-resilient and environmentally sustainable economy by 2050,” he explains.

“The long-term vision for the agricultural sector is an approach to carbon neutrality which does not compromise capacity for sustainable food production.

“While carbon neutrality is yet to be fully defined we are looking at taking a three-legged stool approach: reducing agricultural emissions in so far as we can, increasing carbon sequestration while increasing fossil fuel substitution.”