Dublin has fallen out of the top 30 smart cities rankings, with access to affordable housing being cited as a priority going forward.

Traffic congestion, air pollution and medical service provision were also identified as being in urgent need of attention from a list of key indicators which contribute to the smart city ranking.

Dublin fell by four places to 34th out of 109 cities in the Institute for Management Development (IMD) 2020 Smart City Index. Index rankings are based on economic and technological data, as well as by a city’s own citizens’ perceptions of how smart their cities are.

Asked to identify their five most urgent areas for the city from a range of 15 indicators, more than 86 per cent of participants listed affordable housing, making in the single largest priority area for all questioned.

The next area of concern was health services, identified by just under 60 per cent or participants. Security (46 per cent) and congestion (44 per cent) highlighted by a similar number of people, while public transport (37 per cent), made up the list of the top five identified areas. 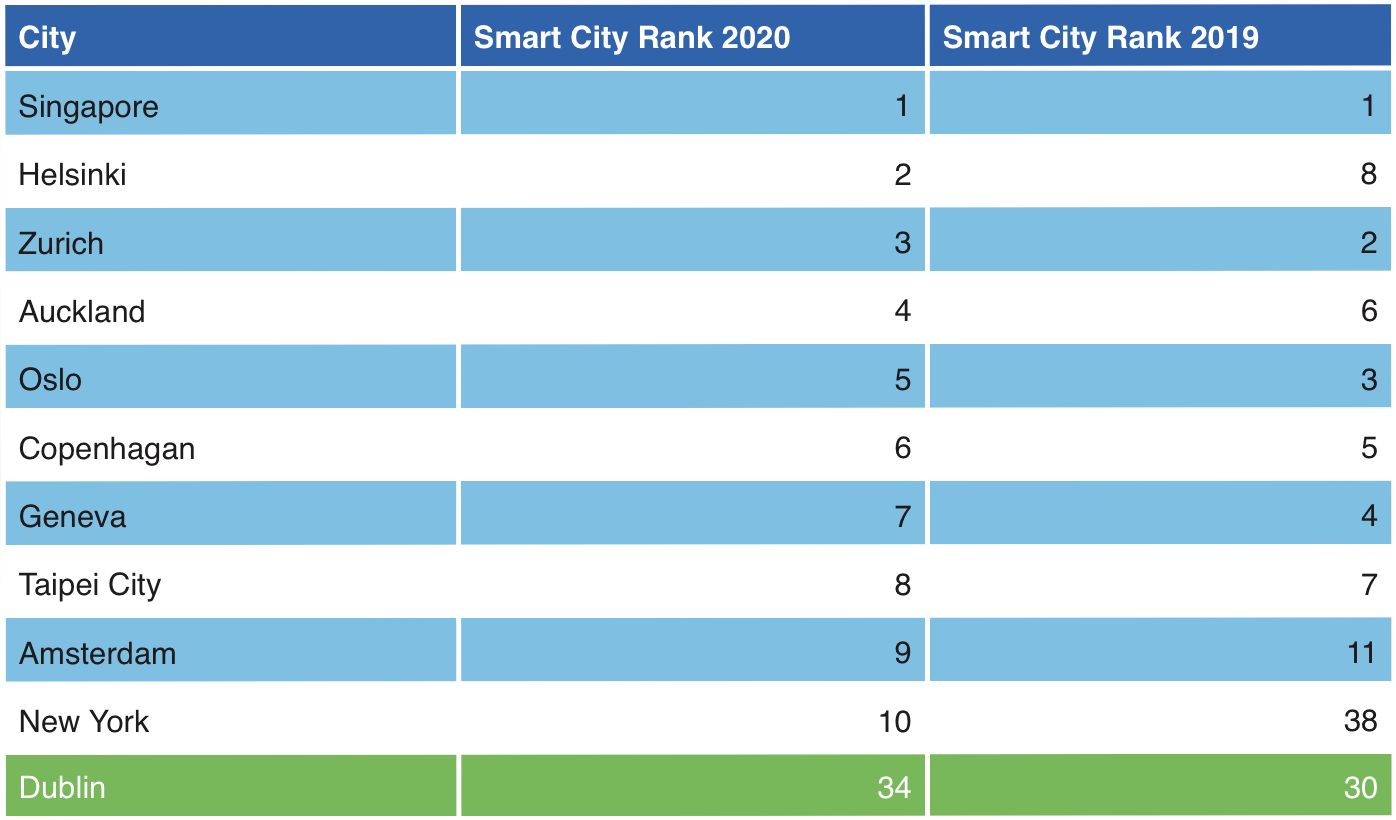 Also included in the data released with the latest rankings was individual city attitude survey results. Almost 62 per cent of citizens surveyed said they were willing to concede personal data in order to improve traffic congestion. A further 69 per cent said they were comfortable with face recognition technologies to lower crime. However, less than 60 per cent believed that the availability of online information has increased their trust in authorities.

Dublin was one of many European cities to experience a fall in their rankings, in a year where a correlation has arisen between smarter cities and those handling the pandemic better.

In each city ranked, 120 citizens were asked questions in April and May 2020 on the technological provisions of their city across five key areas: health and safety, mobility, activities, opportunities and governance. The final score for each city was computed using the perceptions of the last two years of the survey.

The findings suggest there are advantages to granting mayors and local authorities greater powers, with the goal of improving the wellbeing of citizens through the implementation of technology.

Singapore, Helsinki and Zurich were ranked as the top three smart cities in the 2020 survey, displacing Oslo from last year’s podium. Expectedly, the biggest changes were recognised in cities considered underdeveloped, where improvements in digital services have had a greater effect on public perception. Interestingly, another finding highlighted in the survey is the rise of some second cities. Bilbao, for example, fared better in the rankings than the capital of Spain, Madrid. In the UK, Birmingham saw a rise of 12 places compared to only a five-place improvement for London.