Barry Lowry, Government CIO for Department of Public Expenditure and Reform discusses the concept of a smarter government, driven by digital, and Ireland’s progress on this journey.

Research firm MarketsandMarkets™ recently predicted that the global digital transformation market could be expected to grow to as much as $665.0 billion by 2023, at a CAGR of 18.1 per cent during the forecast period. This, they said, would be driven by organisational needs to serve changing customer preferences and enhance operational efficiency. They highlight the major drivers of this market as being the rapid proliferation of mobile devices and apps, the increasing penetration of IoT, the growing adoption of cloud services, and the need to improve operational performance to gain competitive benefits in the market. Given the recognised correlation between successful national digital economies and successful digital government services, most nations are tackling the challenge of seeking to do digital government smarter.

In recent years, the European Union has fully embraced the potential of digital, stating that a fully integrated Digital Single Market (DSM) could grow European GDP by ⇔415 billion per annum, and has used its Digital Economy Society Index (DESI) as a means of generating intra-union digital competitiveness. The EU ranking incorporates five key indicators of digital health including: connectivity; human capital; uses of internet; integration of digital technology; and digital public service. Lowry highlights Ireland’s impressive movement from ninth to sixth in the latest Digital Economy Society Index (DESI), leapfrogging the now seventh placed United Kingdom, but cautions the work that remains if Ireland is to break into the illustrious ‘top five’.

While Ireland’s overall performance is strong, deeper analysis points to a weaker performance in terms of digital public services than in the other key pillars, especially in areas concerning citizens.

“Ireland ranks 10th in Digital Public Services with no significant change in the rankings. It achieves top ranking in Open Data and an almost perfect result in digital public services for businesses. When it comes to services aimed at and used by citizens, the results are less impressive,” the DESI report states.

Similar results are evident in the Fletcher School Digital Planet 2017 Report, a more globally-focussed study, which shows that while Ireland ranks as one of the world’s best in terms of its digital economy, momentum is slow.

“The study indicates that Ireland cannot afford to be complacent about its high ranking but rather constantly seek ways to accelerate and improve how it does digital. Complacency would be a risk to us as a smaller country which is increasingly competing in a global market and which has benefitted so much from global investment in its journey to becoming a leading tech nation,” says Lowry.

“In many respects, given that we are still emerging from some seriously difficult years, ranking 10th in Digital Public Services isn’t such a bad result and the good news is that we know what we can do to improve.”

Pointing to the existing Public Services ICT Strategy as “the building blocks of transformation”, Lowry outlines that the ambition to provide greater mobile access to public services must be matched with the desire to enable this to happen.

“We’ve got to do that by making sure all of our digital services, meaning a cross-sectoral approach and not just in central government or local government or health, are intuitive and look and feel the same over time,” he adds.

“This requires collective and cohesive leadership. It simply cannot be left to one office, department of even minister. Everyone must put their shoulder to the wheel.”

Lowry highlights the growing evidence of this across the Public Service. “We now have a digital leaders’ forum across central government. This group is jointly chaired by two Secretaries-General and contains representation from every departmental board. We also have a cross-sectoral group in place solely focused on the acceleration of digital services, which contains senior representation from health, education, local government and the justice sector. 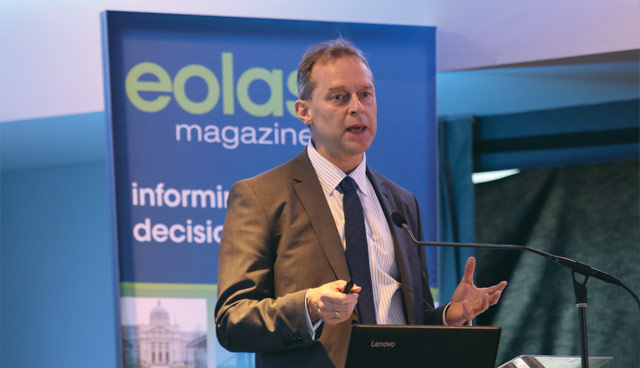 Complacency would be a risk to us as a smaller country which is increasingly competing in a global market and which has benefitted so much from global investment in its journey to becoming a leading tech nation.

“What is really pleasing is how our priorities are being developed. We don’t just talk about user-centric public services, we talk about user-driven services. In other words, we are actively engaging with the users of our services to understand what they like and what frustrates them and using that to prioritise our activities.”

Lowry highlights the extensive public survey carried out with IPSOS and the ongoing partnership with Trinity Business School as examples of this approach. “We were very keen to really understand the user experience when using our services and some of the evidence returned, even in areas where we thought we were pretty good, was sobering. But if a bit of ‘tough love’ is necessary for improvement, then we’ll welcome it.

“It was also great to see the eGovernment Minister personally attend several of the events, wanting to hear for himself what was going well and what needed to improve”.

Like all the leading digital countries, Ireland recognises the importance of joining up data and providing safe user authentication as being key to smart digital government.

Lowry cites the passing of the Data Sharing and Governance Bill into law and the Government’s approval of the data strategy (Public Service Data Strategy 2019-2023) as providing a strong mandate and legal basis for the safe and transparent sharing of data to provide better public services. He also points to recent government survey feedback and the uptake of MyGovID accounts (approximately 300,000) as providing encouraging evidence that the public is supportive of the Government’s ambitions and wants to see progress.

He outlines the plans in Europe to initiate recognition of national e-ids across member states and describes progress as “critical” to Ireland in terms of European alignment, as well as its own digital business.

Lowry is part of the senior group reporting to the Taoiseach regarding the development of the new National Digital Strategy, scheduled for publication by the middle of the year, and has been involved in extensive consultation with a range of stakeholders including industry, health and education providers, and citizen and society representatives.

“I think there is a general view that Ireland will be best served by close partnership working with government, industry and academia working together in the deliverance of shared goals centred around the needs of our people.” 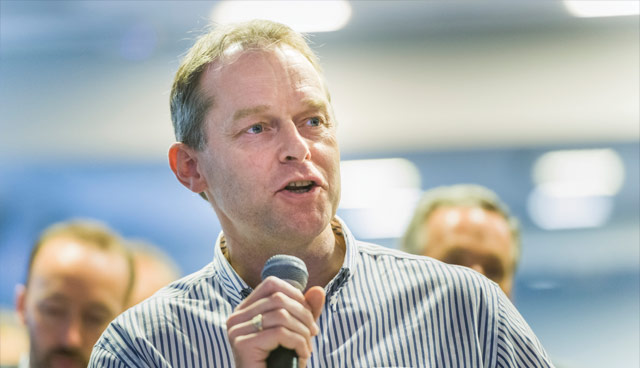 I think there is a general view that Ireland will be best served by close partnership working with government, industry and academia working together in the deliverance of shared goals centred around the needs of our people.

Lowry cites the example of Open Data where this approach has resulted in Ireland being recognised as the best in Europe. “It is a privilege to involved in the Open Data Board and get to be part of such an energetic and passionate group. We recently spent a day together planning how to maintain momentum and have already sketched out a list of priority outcomes for the next 12 months.”

Lowry concludes by emphasising the desire that this should be a journey that everyone can be given a chance to be part of. “The desire for inclusivity really excites me. In the last few months, we have worked with An Post to pilot Assisted Digital Services; we launched the first Government ICT Apprenticeship scheme just after Christmas with over 1,000 applicants; and the Future Jobs Ireland initiative has digital at its very core, including the ambition to develop a GovTech eco-system.

“Ireland has an uncanny knack at punching well above its weight in so many areas, including academia, sport and the arts. All the ingredients are there to be a digital exemplar for other nations, and we are certainly moving in the right direction.”