Outlining the challenging context in which Passport Services operates, Penollar states that demographic changes, continued interest in overseas travel, the wider use of the passport as an identity document and Brexit all point to a growing demand above the 820,000 passports issued in 2018.

Added to this, the family situation in Ireland has become more complex, which in recent years has led to the need for greater detailed attention to more applications. At the same time, issues around security have somewhat shifted. As the trusted national identity document, the passport’s security features have greatly enhanced in recent years, like in many other countries around the world. Globally, there is recognition that the improvement of security features within the book have seen a move from criminals trying to counterfeit books towards identity theft and in particular through techniques such as morphing.

Outlining why recognition of this is important in the digital journey, Penollar says: “The challenges to the integrity of the passport are only going to increase in the years ahead and if we don’t address these challenges they have the potential to damage Ireland’s reputation, such as our visa-free access by our citizens to other countries.”

Currently Ireland holds a ranking of fourth in league tables of the world’s most powerful passports, judged on the strength of visa-free access to other countries around the globe. “By identifying, preventing and combatting fraud we aim to maintain the strong reputation of the Irish passport. We want to at least keep it at fourth and even have ambitions to move into the top three,” she adds.

In 2015, the Department of Foreign Affairs and Trade commenced the development of a design and reform programme for Passport Services, aiming to address the service’s needs over the following decade with a ⇔21 million capital investment plan running to 2021.

Penollar points to a recognition that the application systems and business processes running in 2015, designed in 2002 and implemented in 2005, needed to be transformed in the context of rapid technology evolution. However, as she explains, the first steps of digital transformation actually originated with the off-line product, the passport book.

“In 2013 we launched a new passport book to allow for the removal of the laser signature and instead accommodate for a bearer to sign their book on receipt, which had previously been a huge blocker in terms of allowing for online applications,” she says.

“In parallel, we had to look at our appointments system and our interactions with people.” Painting a picture whereby at the height of demand, some people were waiting up to nine hours to be seen at a passport office and describing it as “a horrible experience for customers and for staff”, Penollar adds: “The introduction of an appointments system seemed logical but it was a big step and it totally transformed how we the passport service interact with the public.”

The Director emphasises the ambition to create a better service for the customer as central to the PPS’s journey and this ambition was the driver in the introduction of a passport card. Innovative in its design to both be easily carried by a person and to operate as an identity document, the pilot project was launched in parallel with an app and is described by Penollar as an “ideal testing bed” for future digital applications.

“We learned two important lessons from the passport card trial. Firstly, that an app was not going to be suitable for passport applications and secondly, that digital photo submission was going to be a challenge.”

Passport Services used this learning to launch a new “accessible, responsive online web application system” for online for adult renewals in 2017. The new system drastically reduced the number of steps required to be taken by an applicant.

Highlighting how this flexibility can be demonstrated in the recognised challenging area of ensuring photos are of passport quality, the Director emphasises the importance of options for the customer. In this instance customers are given three options: 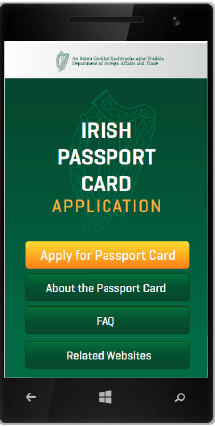 The result was that in the first year there were over 300,000 online adult renewal applications online and the Passport Service gained the confidence to open online child renewals, despite increased levels of complexity, in November 2018.

“It’s also meant a major change for us internally, where we can now free up our people to focus on higher value added tasks. However, while it has been pleasing to see that our service has impressed customers, we recognise that expectations will continue to increase and as a result we must constantly raise the bar of our own performance.”

Concluding, Penollar highlights that key to the success has been partnerships with the private sector, across government and internally. Highlighting that reform has been a major cultural change for many of the Service’s staff, she highlights the influence of:

Not willing to rest on their laurels, Penollar outlines ambitions to continue the digital journey including plans to this year incorporate robotic process automation and the rollout of new internal digital processes and supporting technology, which could reduce turnaround time by a further two days. By 2021, PPS are hoping to be able to support first time applicants applying online.

“While we will continue to have choice as a basis to our customer service as we continue on our digital journey our underlying ambition is to create an online system that is so attractive the citizens will increasingly see it as the best option.”