The death of Nobel laureate John Hume prompted an outpouring of grief for the man who sacrificed political and personal capital in pursuit of an selfless philosophy, writes David Whelan.

A founder of the SDLP, John Hume’s name is renowned globally for his role in indefatigably pursuing his vision of a shared future and ending political violence in Ireland.

The outpouring of tributes to Hume, aged 83, from across civic and political society somewhat masked the turbulent journey he made in steadfast rejection of violence and a firm belief in the principle of consent.

His role in ultimately persuading unionists and loyalists to share power with nationalists and republicans in 1998 is his lasting legacy but was only one accomplishment on a long list made in an effort to improve society in the north of the island.

Hume, despite his many travels, remained rooted in the Derry. He was one of the first beneficiaries of hard-fought for free secondary education in Northern Ireland, allowing him to attend St Columb’s College in Derry. He would later recount his belief that public education transformed the nationalist community in Derry and in recognition of the power of education, decided to pursue an early career as an educator, after initially studying for the priesthood.

As a teacher, the former MP, MEP and MLA recognised the value of repetition. Later in his political career he would be both criticised and lauded for his use of a ‘single transferrable speech’. Hume often retold the story of the advice of his father during unrest at a civil rights protest in his younger years; “you can’t eat the flag”. Hume’s repetitive mantra, however, was somewhat justified when, in announcing the loyalist ceasefire in 1994, David Ervine declared: “All elements must be comfortable within Northern Ireland… you can’t eat a flag.”

While many recognise the peace process as his greatest achievement, Hume proudly recalled his role as a founding member of Derry Credit Union, serving as the youngest ever President of the Irish League of Credit Unions at the age of 27 from 1964 to 68. He believed that no movement had done “more good for the people of Ireland, north and south,” than the Credit Union movement.

He was also a founding and leading figure in the civil rights movement in Derry during the late 1960s. His energy was largely focused on local reform, highlighted by his role as the first Chairman of the Derry Housing Association and as Chairman of the unsuccessful University for Derry campaign.

However, Hume did not take part in the anti-internment march on Bloody Sunday organised by the Northern Ireland Civil Rights Association, believing that the aggressive behaviour exhibited by British soldiers at the Magilligan Strand protest the previous week was cause for concern. Hume actively tried to dissuade people not to host or attend the march which would ultimately see 26 unarmed civilians shot by the British Army, 14 of whom were killed.

Three years prior to Bloody Sunday, Hume’s attentions had turned to politics and he was elected as an independent member of the Parliament of Northern Ireland. He was a founding member of the Socialist Democratic and Labour Party (SDLP) in 1970, which rejected abstentionism and wanted to improve civil rights from within Stormont’s system. The party, disillusioned with the system, soon withdrew and the Parliament was abolished in 1973.

He was elected to the new Northern Ireland Assembly in 1973, serving as Minister of Commerce in the short-lived power-sharing Government. In 1974, he unsuccessfully ran for a seat in Westminster, something he would later achieve in 1983.

Hume succeeded Gerry Fitt as the SDLP’s leader, then the largest nationalist party, in 1979 and in the same year became one of the North’s three MEPs elected to the European Parliament.

Hume’s unwavering vision for Ireland was best summarised during his speech when collecting the Nobel Peace Prize in 1998, alongside David Trimble.

“I want to see Ireland as an example to men and women everywhere of what can be achieved by living for ideals, rather than fighting for them, and by viewing each and every person as worthy of respect and honour.

“I want to see an Ireland of partnership where we wage war on want and poverty, where we reach out to the marginalised and dispossessed, where we build together a future that can be as great as our dreams allow.”

Hume’s intelligence was matched by his incredibly headstrongness. He had the foresight to see that any solution for lasting peace would require the political inclusion of Sinn Féin, even if that move would be politically damaging for the SDLP.

His stamp is evident on each of the major political developments of the time including the Sunningdale Agreement, the Anglo-Irish Agreement and eventually the Good Friday Agreement. However, the description of Hume as the architect of the Belfast Agreement is sometimes overstated. Hume possessed the vision and undoubtedly helped shape the political climate for the Agreement but he also surrounded himself with capable allies. Mark Durkan, for example, who would go on to lead the party after Hume’s departure sculpted much of the wording and the key strands of the Good Friday Agreement. Indeed, Durkan and Alex Attwood were among the minority who supported Hume when many colleagues sought to oust him following the emergence of the ‘secret’ discussions between Hume and Sinn Féin’s Gerry Adams.

The talks, which had been ongoing for many years, were publicly revealed in 1993 and the subsequent fallout took a significant toll on Hume’s persona and political capital. While shaken by the Dublin media’s response to his efforts, remained defiant publicly and famously declared that he didn’t give “two balls of roasted snow” what sceptics thought. The media alone was not Hume’s only concern. Within the SDLP, the majority sought change as offered by the party’s deputy leader, Seamus Mallon. Regardless, Hume overcame the personal strife, though the ideological split in the party is one that is still evident today. This materialised when Mallon was appointed as the deputy First Minister to the Northern Ireland Assembly following the acceptance of the Good Friday Agreement, rather than Hume.

That Hume likely foresaw the political rise of Sinn Féin to the detriment of the SDLP, something which they have yet to recover from electorally, is often missed. Prior to his death, Mallon infamously said that while John Hume was no fool, the Sinn Féin leaders had played him “like a 3lb trout”. However, others choose to believe that Hume’s actions were evidence of his self-belief and conviction in achieving peace, even if that came with a political cost.

Hume swiftly recognised the contribution external actors could have on the internal realities in the North. He regularly travelled to the United States to consolidate support for non-violent resolution to the conflict, while also securing political backing for his efforts. Equally, he built up contacts and relationships across Europe in his role as MEP and seen the European project, and its associated softening of borders for trade purposes, as a fundamental basis for improving co-operation across the island of Ireland.

Former US President Bill Clinton paid tribute on Hume’s death saying that his chosen weapons in his “long-war for peace” had been “an unshakeable commitment to non-violence, persistence, kindness and love”.

More than two decades after the Good Friday Agreement though, the work started by Hume remains unfinished. While violence has largely subsided, peace remains volatile and the political power-sharing institutions unstable. Hume despised sectarianism but it remains evident in Irish society, with polarisation of nationalist and unionist communities still evident. Brexit has cast up many of the challenges still facing the North’s current leaders.

Hume’s efforts came at a personal cost. In the late-1990s it was announced that he was showing early signs of dementia. By 2001, he had resigned as leader of the SDLP while battling poor health. His funeral in August was viewed as somewhat fitting of the globally recognised statesman. Surrounded by a limited number of close family and friends, Hume’s requiem mass in the town he loved so well was dignified, humble and marked by all shades of the political spectrum. 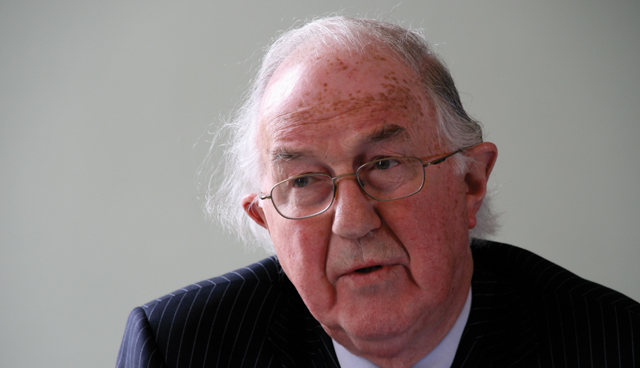 August 2020 also marked the death of Brendan Halligan, another major contributor to the fight for social justice in Ireland. The former TD, senator and MEP enjoyed a lengthy and varied career which included over a decade as General Secretary of the Labour Party.

That coalition marked the start of his own political career, appointed as a senator in 1973 before a by election win saw him as a TD for Dublin South-West between 1973 to 1976. He depicted leadership and foresight when as an MEP between 1983-1984 he was one of few voices advocating support for gay rights and the introduction of abortion into Ireland.

His interest in European affairs and Ireland’s role within Europe, which led him to be founder and President of the Institute of International and European Affairs think tank, was matched by an interest in energy policy and renewable energy and in 2007 he was appointed Chairman of the Sustainable Energy Authority of Ireland.

Taoiseach Micheál Martin said he was “a man who gave his life to politics and the public service with a deep commitment to the institutions of the State”.