A new report by the Road Safety Authority (RSA) says that the vast majority of cyclist injuries occur on urban roads. The report also found that Ireland is “lagging behind” other European countries in the construction of dedicated cycle tracks.

Commenting on the research, RSA CEO Moyagh Murdock says that it “reveals the majority of collisions involved a cyclist and a vehicle” and that it also reveals the “need to remove the potential for conflict by providing more dedicated and better cycling infrastructure”. Murdock asserts that Ireland is “lagging behind many of our European counterparts in introducing dedicated cycle tracks” and that Ireland needs “separate infrastructure for vehicles and bicycles that remove danger points from our roads and reduce conflict between road users”.

Moves have been made in local government of late to improve the cycling infrastructure in the country, with Dublin City Council notably approving plans for a trial run of the Liffey Cycle Route along the city’s quays in early March. Under the recommendation of council Chief Executive Owen Keegan, a temporary route will be implemented along both the north and south quays on a phased basis. Simultaneously, bike lane protectors, consisting of wands and orcas, have been installed on cycle routes across the city.

It is estimated that the temporary route should be completely rolled out by August 2020, with work on implementation continuing amidst the Covid-19 pandemic. The cost of the trial is estimated at €800,000. The Liffey Cycle Route was first proposed in 2011, with designs or a 5km route from the Tom Clarke Bridge to Heuston Station unveiled in April 2019. The Council estimates the earliest completion date for a permanent scheme to be 2024.

In Cork, a city once considered ahead of the curve in terms of its cycling infrastructure due to the introduction of segregated counterflow cycle lanes in the city five years ago, a recent survey has found the city to be squandering the progress it had made. The survey done by Cork Cycling Campaign found that only 5 per cent of respondents found the city’s cycling infrastructure to be fit for purpose, with 75 per cent of respondents also saying that safety concerns were the biggest obstacle toward them cycling in the city more often.

Local government authorities constructed 14,000 bicycle parking spots and 1,500km of segregated cycle lanes between 2011 and 2018. With the near-empty streets caused by the Covid-19 pandemic allowing people to envision swathes of cities being car free and other notable projects in the offing such as the €20 million Clontarf to Dublin city centre cycle track currently out to tender, there is potential for this year to mark a turning point in Ireland’s ailing cycling infrastructure. 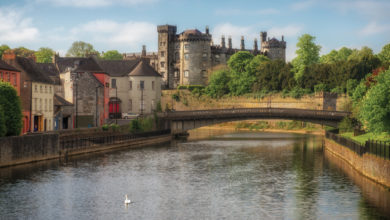