FitzGerald believes that now is the time for the introduction of a “realistic” carbon tax and has also suggested that the introduction of congestion charges in Ireland’s major cities could play a role in helping to fund the transition to a low carbon economy.

“Ireland is not meeting its current emissions’ targets. Making this happen will require significant technological change. We also need to use less energy,” he states. “We need to reflect the potential damage done by emitting greenhouse gases in the price of those emissions.

“The carbon tax in Ireland, and the carbon price in the EU Emissions Trading System, are too low and do not reflect the costs of climate change. This is a key factor in our failure to make adequate progress on tackling climate change.”

FitzGerald outlines a number of reasons why pricing emissions of carbon dioxide and other greenhouse gases is important. In the first instance, it discourages use of fossil fuels and encourages us to switch to alternatives such as renewables. Secondly, carbon pricing, and especially the carbon tax, provides the Government with revenue which it can use to compensate or support those who are on low incomes and it can be used in the budget to reduce other taxes or increase expenditure.

“Shifting from taxes on labour to taxes on carbon can actually increase employment, as well as playing a crucial role in reducing emissions of greenhouse gases,” he adds.

“The most important effect of appropriately pricing emissions is probably to incentivise business to invest in new technologies, which will allow us to continue to enjoy a high standard of living while eliminating emissions of greenhouse gases.”

FitzGerald points out that the prospect of a higher price for carbon is already driving essential innovation in electrification of transport and low carbon home heating options. He believes that government must facilitate the electrification of heat and transport.

“We must decarbonise electricity but the price to consumers must be right,” he says.

FitzGerald welcomes the ‘carbon budget’ nature of the climate action plan over the next decade, which means early action will be rewarded.
He points out that the successful implementation of the new Climate Action Plan will see emissions fall by 2 per cent between now and 2030.

“But this figure will rise to 7 per cent annually for the 20 years thereafter. This looks unrealistic, which raises the issue of pushing for greater falls in emission levels now,” he explains.

FitzGerald outlines that a fall in greenhouse gas emissions during the years of the recession does not compensate for current levels and therefore stresses the necessity of the pathways towards decarbonisation up to 2050.

“The current EU targets do not take full account of the potential growth in the Irish economy,” he states. Reflecting on the performance of Ireland in not meeting its global warming target heretofore, FitzGerald adds: “Until the development of the new Climate Action Plan, we were going to be 25 per cent over budget by 2030. The new plan sets out realistic and achievable targets for the various sectors.”

FitzGerald highlights that members of the Climate Change Advisory Council have looked at the least cost options involved in Ireland meeting its emissions targets for 2030.

He believes that the Government will know early on if Ireland is not on schedule to meet its targets, adding: “A constant assessment of actions has been built-in to the implementation model that will be put in place.

“This will quickly confirm whether or not Ireland is on target to meet its 2030 targets. Where the non-Emissions Trading Scheme sectors are concerned, price will be essential to motivate change.

“Given this reality, Ireland must introduce a carbon tax, which should rise over the coming years. However, this will only be a beginning. Higher prices encourage lower consumption levels and the general public becoming much more energy efficient.

“In turn, government can use the revenues generated to compensate the vulnerable and to reduce other damaging taxes. Raising carbon prices sends a message that in a carbon free world you will make money if you develop and implement zero carbon technologies.” 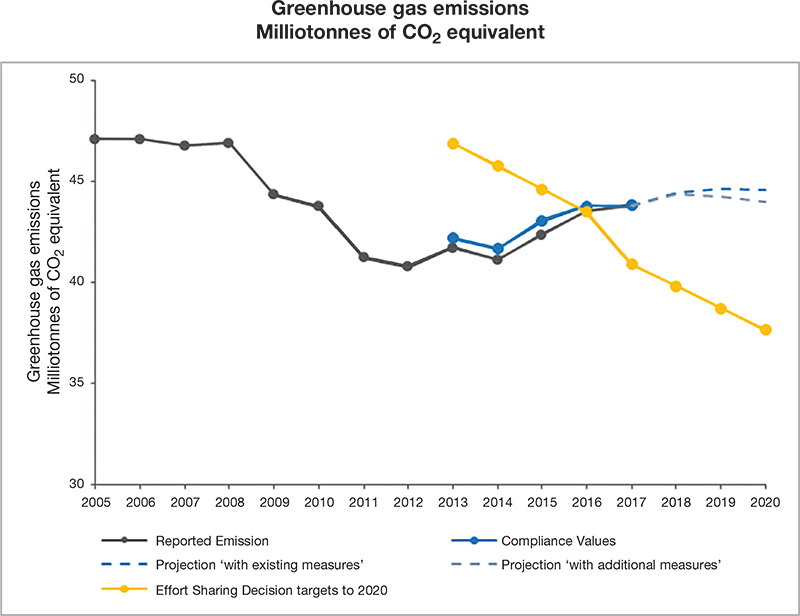 Turning to the challenges which face the heating sector, FitzGerald says that it could cost around €50 billion to retrofit every house in Ireland.

“It must be profitable for householders to make this investment. The new Climate Action Plan must also recognise the supply side of the equation,” he says. “The building sector is at capacity and lacks the experience and skills required to retrofit Ireland’s homes. We need to ramp up this activity gradually.

“Local authority housing should be targeted in the first instance. They can gradually increase retrofitting contracts to contractors. Low income households will be credit constrained. Government support must be targeted to these people.

“In addition, the elderly will secure major health benefits from retro fitting.”

According to FitzGerald, denser housing developments will help tackle the transport problem.

He adds: “Improved infrastructure is required to facilitate the purchase of electric vehicles. The use of compressed natural gas will significantly reduce the carbon footprint of the haulage sector.

“Where, the Emissions Trading Scheme sectors are concerned, the French have proposed a regional carbon price floor. Last year France asked the Netherlands, the UK and Germany to join this scheme. It is imperative that Germany signs-up for this project. Both the Oireachtas and my committee have signalled strongly that Ireland should also join this initiative.

“A regional carbon price floor would get rid of all coal and peat powered electricity generating capacity across all participating countries.”

FitzGerald concludes: “Electricity must be completely decarbonised. The Government must fully support the use of renewable technologies. The introduction of an effective carbon tax will help generate public monies to drive the raft of policies that will be required, if Ireland is to meet its emissions’ targets.

“However, if the right steps are taken, it could be a win/win scenario for the both the Government and the country as a whole.”

Low Carbon Future: The Foundation of the CRU Strategic Plan

A decarbonised Europe by 2050

August 2019
Back to top button
Close
By continuing to browse this site you are agreeing to our use of cookies.