Seán Ó Foghlú, Secretary General of the Department of Education and Skills, talks to Owen McQuade about reform in education and training and the importance of taking a ‘whole system’ approach in delivering change.

The education and training sector, in simple terms, accounts for one-third of the public sector and together with health and social protection is responsible for over 80 per cent of public sector spending. Education has four main sectors: primary, second level, further education and training, and higher education. Responsibility for training was transferred to the department in 2010.

With a large and diverse sector such as education and training, Seán Ó Foghlú emphasises that a “joined-up and consistent approach across all four sectors is needed.” A system level approach must be taken to reform and although key areas for action are often identified, it is important to remain focused on the whole system.

“It is very easy to focus on reform in part of the system,” explains Ó Foghlú, “but international research on education and training is that whole system reform is needed to deliver meaningful change, and should impact on all learners, all teachers, all schools and colleges – in fact anywhere learning is taking place.”

He adds: “We have an overall set of ambitious reforms that operate within and across the sectors. Within that, enabling movement from one sector to another, from pre-school to primary, primary to second level and the transition from second level to further education and training and/or higher education is very important.” As part of the department’s Integrated Reform Delivery Plan, reforms are identified under four themes:

• and building the right systems and infrastructure.

The scale of the education and training sector is significant with over 100,000 employees. The sector has had to manage six years of tightening budgets by increasing efficiency while continuing to improve outcomes for leaners. The sector has a significant spend, with a budget of €8.4 billion which is almost 17 per cent of government spending.

Against a backdrop of reducing resources, there have been increased demographic pressures at primary, second and third level. Numbers in primary and second level schools will continue to increase, peaking in 2019 and 2026 respectively. As a result, the sector will be in continuous expansion for a period of time, and more teachers will be required. A significant programme of capital expenditure will be needed to cope with the increased numbers.

Ó Foghlú says that any approach to reform must be across the sectors, he cites one example of the department’s investment in the teaching workforce: “The experience in the classroom is what drives change and we want to make sure that the learning experience and the quality of teaching is of the highest order.” The department has, therefore, invested a lot of effort into the reform of teacher education. Historically, a range of different providers were involved in initial teaching training. The current programme of structural reform will establish, through mergers and amalgamations, six centres which will incorporate initial teacher training for early years, primary and second level education (as well as research) under a broader Institutional setting. “These reforms will bring existing bodies into a single centre, so that the student experience is a single and coherent one,” Ó Foghlú says.

“Traditionally, in Ireland, we have respected teachers and teaching has remained a highly valued career in society. We need to ensure that teaching remains an attractive career.” In addition to the structural reforms, Ó Foghlú also suggests that “there needs to be a range of continuous teacher developments to support teachers throughout their careers.” A support structure (the Professional Development Service for Teachers) has been developed and a regulatory body for the profession has been established through the establishment of the Teaching Council. He notes: “Until this time last year, you didn’t have to be a qualified teacher to take up a teaching post.” A further element of the reform programme across the schools sector is the development of supports for school leadership. “We recognise it has been challenging as we have taken some resources out of schools, particularly in the middle management area,” Ó Foghlú comments. “We recognise that we need to encourage and develop leadership in schools on a continuing basis. A further area we are supporting through our inspectorate is school self-evaluation, which is now in its second year. Schools go through a process of internal evaluation and undertake consultation with their community about an aspect of their work.”

When asked how we are doing as a society in terms of education and training, he answers: “Relatively well, but we could be doing better in some areas.”

The studies showed that Ireland was significantly above the international average in reading and maths at primary level, tenth out of 45 in reading and seventeenth out of 50 in maths. Ireland also does relatively well in reading at second level, according to the PISA study, coming fourth out of 34 OECD countries and seventh out of all participating countries.

“We have had a lot of improvement in science but in maths, we are not doing so well,” he continues. “Over the last four to five years, there has been an emphasis on developing and implementing a literacy and numeracy strategy, which includes the developments in teacher training and the development of the mathematics curriculum at second level [Project Maths] in order to focus on maths learning and outcomes which we know we are not good at when compared internationally.” In science, a curriculum was introduced at primary level 15 years ago and this is “an example of where a long-term investment has changed our relative position.”

Similarly, the department knows that the numeracy and literacy changes that it is putting in place now will work in the longer term “and we can’t expect any more immediate impact.” Standardised testing has also been introduced in numeracy and literacy at primary level to help schools to plan for their individual students’ attainment levels. The summarised results of these tests will also provide an indication of overall performance and will inform future policy direction.

The department is also in the process of changing the second level curriculum, particularly in the first three years (junior cycle). A new curriculum started this September, with English, and it will roll out over all subjects over the next 8-9 years. “There are some difficulties around this with the teacher unions,”

Ó Foghlú acknowledges, “and hopefully we will come to a way forward that we can all buy into.” Overall on the reform agenda, Ó Foghlú indicates that there has been positive engagement “in what has been a difficult period for everyone in the Public Service.”

“We have changed our approach to managing change quite a lot. We wanted to capture all the reforms in a joined-up way,” says Ó Foghlú. There is an overall reform plan co-ordinated by the department’s Programme Management Office (PMO). The plan outlines and details the progress of all the major reforms across the sector and governance structures have been put in place with a named individual responsible for each reform project.

The department has brought in some expertise in areas such as shared services and change management. “The PMO has been a great success in ensuring the overall progress of reforms are tracked and in giving a focus to the management of major change projects, such as the re-configuration of the further education and training sector including the establishment of the education and training boards [ETBs] and the transfer of the training functions from SOLAS to the ETBs,” says Ó Foghlú.

The amalgamation of vocational education committees was a major change project. Thirty-three VECs were amalgamated into 16 ETBs and given responsibility for training delivery, which had been the responsibility of Fás. As part of this process, Fás was effectively disbanded and a new body (SOLAS) was established as the funding, advisory and regulatory organisation for further education and training.

To deliver the change, the department adopted a new way of working. Cross-divisional teams were established and a detailed work programme was developed. Staff have been assigned to the department from the sector and officials work very closely with the CEOs of the 16 ETBs. Two pieces of legislation established the ETBs and transferred the training centres to them.

“With these changes, there was a leadership role taken by the people in the sector which helped bring their people with them,” Ó Foghlú remarks. “Bringing people with you and keeping them positive is difficult and with a system-wide change such as this – impacting on every county in the country – you can’t have one-on-one engagement with everyone. One of the key strands of the programme was the development of a communications plan which designed various communications mechanisms to engage people and communicate the changes effectively.”

Ó Foghlú reflects that while the formal structural change “can be ticked off,” the real difference will be the change in work practices over time “and we are only getting into that.” Internal systems are merging and being stabilised, engagement with ETB and former SOLAS staff is being fostered, connectivity is being improved and initial steps have been taken towards the development of shared services in areas such as payroll and finance.

“Quite often when you are looking at shared services,” he comments, “there can be a degree of resistance as people often don’t want to lose control over the day-to-day transactions. With the ETBs, they actually are impatient for the shared services because they can see the long term benefits particularly in light of scarce resources.”

The department’s engagement with the ETBs has been positive but it has raised challenges. Decisions on the implementation of shared services must be made collaboratively with the sector and the Department of Public Expenditure and Reform, with all the complexities that this entails being carefully worked through.

Ó Foghlú notes that “the role of the department in delivering particular projects and services varies depending on the nature of the work, the policy and operational framework in place and the autonomy of the stakeholders involved.” In some cases, the department works closely with the sector (as with schools) but with others, it works through intermediary bodies which “take the lead in any change.”

Dublin, Tallaght and Blanchardstown Institutes of Technology, for example, are merging with a view to becoming a technological university – a process which they are responsible for and are working through. In this case, the Minister and department set the policy framework and the Higher Education Authority oversees implementation of that policy. However, the department was “much more involved” in the ETB process: “Because of the diversity of the types of institutions, we have to find different ways of working within each of the different sectors.”

As for the way ahead, he comments: “We don’t have a single reform top of the list. The important thing for us is to keep an overview of change across the sector and to ensure momentum is maintained across the board.” The reform agenda has to cover all aspects of education and training and must impact on a “system-wide” basis. Pilot initiatives can be useful but they do not deliver the system-wide change that is needed.

“Reform in the education and training sector is really about sustainable long term change and the programme we are implementing has incremental change built into it,” Ó Foghlú says in conclusion. “We are working through a programme of system-wide changes that will deliver better outcomes over time.” 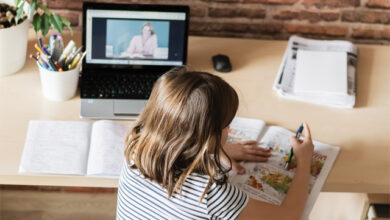