Much like Ireland, Vietnam is no stranger to colonial occupation, famine, independence struggle and partition. Now, however, the easternmost country in mainland Southeast Asia is making confident strides into the future. Ciarán Galway visits the Irish Embassy in the charmingly chaotic capital of Hanoi to discuss Irish-Vietnamese relations with Ambassador John McCullagh.

Hanoi is an ancient city which, in its relatively recent history, withstood aerial bombing campaigns, infamously spearheaded by the US Air Force’s mammoth B-52 Stratofortresses. Today, long since emerged from the smoke and shadows of the era-defining ‘American War’, the city is a cacophony of noise similar to cities of its Association of Southeast Asian Nations (ASEAN) neighbours.

Overall, there are few obvious indications of the victory won by the Socialist Republic of Vietnam. Still, everywhere the nation’s red and gold flags flutter, often accompanied by the hammer and sickle of the Communist Party of Vietnam. Similarly, depictions of ‘Uncle Ho’ – the first president of North Vietnam and much adored revolutionary, Ho Chi Minh – can be observed virtually everywhere, from modest framed portraits in family homes, to striking state propaganda billboards and, of course, on every bank note.

From early morning until late night, along almost every roadside and alleyway in central Hanoi, the entrepreneurial spirit clanks, hums and hisses. The scent of charcoaled chicken, pork, corncob and dried squid wafts upwards from makeshift roadside kitchens – mostly rudimentary stoves attached to motorcycles – commingling with the smoke and the smog. Within this most social of cultures, locals eat with families and friends on street corners, perched on almost impossibly tiny plastic stools. Guzzling glasses of cheap bia hoi (local beer), they exchange gossip and indulge in an occasional glance at the wide-eyed westerners, who flood the streets of the capital.

The Irish Embassy in Vietnam is located in an inconspicuous corner office building overlooking ‘old town’ streets which neighbour the beguiling Hoan Kiem Lake. Inside, Ireland’s national symbol, the harp, a portrait of President Michael D Higgins and, most interestingly, a Vietnamese translation of the Proclamation of the Republic, are arranged on the walls. Below, the daily ballet of motorcycles choreographs its way through the city, with an incessant chorus of horns as its musical accompaniment.

John McCullagh, a former Political Director at the Department of Foreign Affairs and Trade was appointed as Ambassador of Ireland to Vietnam in September 2019. In his new role, McCullagh is also accredited on a non-resident basis to Cambodia and Lao People’s Democratic Republic (PDR). Having previously lived and worked in Europe and Africa, he was keen to relocate to Asia for his latest assignment. “Vietnam is fascinating,” he asserts, adding: “I feel privileged to be here and experience the depth of culture and the diversity and the complexity of its history.”

One personal challenge already encountered by the Ambassador has been air pollution. “It’s not what we’re used to in Ireland and it’s different from any other posting I’ve been on. Certainly, it takes a while to adjust to how Hanoi works as a city,” he says.

While the Irish population in Vietnam is growing, the precise numbers are uncertain. “We encourage people to register with the Embassy – but not everybody does. Meanwhile, we would estimate that around 25,000 Irish tourists visit Vietnam per annum. So we get our fair share of lost passports and consular cases.

“The growing Irish community resident here helps to promote our visibility as a country and this is boosted, for instance, by active GAA clubs – the Viet Celts in Hanoi and the Saigon Gaels in Ho Chi Minh City. As the number of Irish residents and visitors continues to increase, engaging with the diaspora and providing consular services are important components of our work here,” explains McCullagh.

2016 marked the 20th anniversary of the establishment of diplomatic relations between Ireland and Vietnam. Subsequently, the resident Embassy opened in 2006 with a mission to foster relations and to administer Ireland’s official development assistance programme.

“We establish diplomatic relations in order to interact formally with a foreign government. The Embassy has been here since 2006 and it covers the full breadth of diplomatic relations. Everything you would expect of an embassy: consular services; trade work; and delivering the Irish Government’s development cooperation programme in this part of South East Asia,” explains McCullagh.

“As a country, Ireland is not terribly well known in Southeast Asia and that is a significant challenge. We’re not in close geographic proximity and unlike in some other countries we don’t have a history, for instance, of missionaries or of people who were taught in mission schools. The first priority for us in the Embassy, therefore, is to build recognition and promote Ireland’s visibility in all that we do,” says the Ambassador. 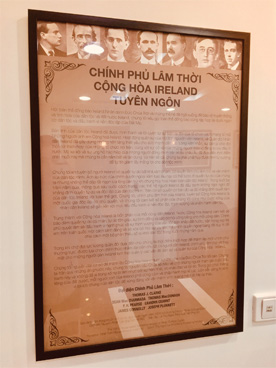 To achieve this, the Embassy relies upon promoting people-to-people connections, the ‘Ireland in Vietnam’ social media platforms and the exchange of high-level State visits. When, in 2016, President Michael D Higgins undertook the first State visit by an Irish president to Vietnam, he emphasised: “However young the formal relationship between our two countries may be, it is one that is built on the solid bedrock of mutual esteem and authentic understanding.”

McCullagh also emphasises the importance of the ‘Global Greening’ events to mark St Patrick’s Day each year in contributing to Ireland’s visibility. Indeed, Vietnam was the first country in Southeast Asia to feature in the campaign. In Hanoi, the Pen Monument at Hoan Kiem Lake has been illuminated by green lights and a free ‘Ireland Day’ festival organised in collaboration between the leadership of Hanoi and the Friends of Ireland in Vietnam. Unfortunately, this will not take place in 2020 as public events have been suspended across the country as a precaution against the Covid-19 virus.

A second priority for the Embassy is the continued development of Vietnam and its strategic links with Ireland, especially in third-level education. The objective is to share Ireland’s experience in education to help drive socio-economic development in Vietnam and in the surrounding region.

The Embassy has been here since 2006 and it covers the full breadth of diplomatic relations. Everything you would expect of an embassy: consular services; trade work; and delivering the Irish Government’s development cooperation programme in this part of South East Asia.

“We work in collaboration with third-level colleges to promote Ireland as a location for study. A small number of exceptional students from Vietnam are offered scholarships and cooperation is underpinned by funding provided by the Embassy to facilitate joint exchange trips, research projects and training between third-level institutions both here and at home,” McCullagh outlines.

Thirdly, describing the bilateral trade links between Ireland and Vietnam as “modest”, McCullagh is keen to facilitate a substantial deepening of this relationship. “A key priority for the Embassy is to facilitate trade between Ireland and Vietnam. With a population of over 96 million people, a growing middle class and in the context of the EU’s ratification of the ‘EU-Vietnam Free Trade Agreement’ and the ‘Investment Protection Agreement’, we are working to assist Irish business in accessing the growing Vietnamese market,” he explains.

McCullagh pays tribute to his predecessor Cáit Moran, who spent a four-year term in Vietnam, as well as the wider Embassy team in Hanoi. “Alongside our excellent team, of both Irish and Vietnamese colleagues, I hope to build on the achievements of my predecessor who undertook some outstanding work in the region,” he notes.

The Embassy’s development cooperation programme work in Vietnam is focused on support for ethnic minorities and facilitating exchanges between Ireland and Vietnam to promote skills development. In Cambodia and Lao PDR, priorities have included tackling malnutrition, unexploded ordnance (mine clearance) and supporting the capacity of key state agencies.

Despite a significant improvement in recent decades, almost 10 per cent of the Vietnamese population still live below the poverty line. The development cooperation programme, designed in consultation with the Government of Vietnam, aims to respond to the needs of marginalised communities.

While ethnic minorities represent only 14 per cent of the population in Vietnam, they constitute more than 70 per cent of the country’s poor. Over the last decade, the Embassy has supported infrastructural development across 10 provinces (currently five), in support of the overarching ‘Programme for Socio-economic Development in Especially Difficult Communes in Mountainous and Remote Areas or Programme 135’.

“The Embassy works with the ministry-level Committee for Ethnic Minority Affairs to develop a masterplan for sustainable development within ethnic minority communities and also funds several civil society organisations. Through a holistic approach and in alignment with the Irish Government’s policy on international development, these groups undertake projects aimed at empowering disadvantaged communities through improved access to services, food security, climate change resilience and gender equality,” says the Ambassador.

Simultaneously, since 1998, Ireland has contributed to unexploded ordnance (UXO) clearance and supported mine risk education across Southeast Asia. Vietnam, Cambodia, Myanmar and Lao PDR are heavily contaminated with unexploded ordnance and mines, which continue to pose a humanitarian challenge. According to McCullagh: “UXO exposes communities to an ongoing risk and restricts access to land usage, including for agriculture, housing and infrastructure. This is an obstacle to community development and poverty alleviation.”

Turning to a vision for his tenure in Vietnam, McCullagh is keenly aware of a number of imminent developments in Irish-Vietnamese relations. “While Hanoi is the political capital, Ho Chi Minh City is the commercial hub. Enterprise Ireland has opened a resident office in Ho Chi Minh City in an effort to deepen trade and investment. Likewise, Bord Bia has also established a presence here.

“While Ireland’s most significant food exports to Vietnam are dairy and seafood products, work is underway to open market access to Irish beef. The Embassy has been working closely with the Department of Agriculture, Food and the Marine to secure this access.

“Looking ahead, our priorities are to raise Ireland’s visibility, increase trade and continue our work in supporting Vietnam’s development, especially in ethnic minority communities,” he concludes.

A native of Finglas in Dublin, John McCullagh relocated to Vietnam in September 2019 along with his wife. Prior to this posting he was Political Director at the Department of Foreign Affairs and Trade in Dublin. McCullagh has undertaken several roles in the Department’s headquarters including in the EU, political, trade and development cooperation divisions and as Director of the Passport Service. Previously, he served as Ambassador of Ireland to Tanzania and has undertaken postings in London, Bonn and Brussels. McCullagh is a UCD law graduate and received a MSc from Trinity College Dublin. In his spare time, he is a running enthusiast and hopes to complete a half or even full marathon during his time in Hanoi.