The contention of a United Nations’ Special Rapporteur that the Irish Government has worsened the housing and homelessness crisis has been rejected by the Government in a back and forth as the two bodies argue over both the causes and nature of what is happening in Irish housing.

In her report to the UN, Leilani Farha accused countries such as Ireland, Spain and Portugal of aggravating and facilitating the housing crisis through “preferential tax laws and weak tenant protections among other measures”. The report asserts that such tax laws and regulations have allowed landlords to become “faceless corporations wreaking havoc with tenants”.

The report makes clear the UN member states’ human rights obligations to regulate the residential real estate market in a way that delivers the human right to adequate housing. “This cannot be left to the private sector to undertake on a voluntary basis,” it states.

It warns that the practice of land hoarding by vulture funds and international corporate landlords – the report specifically names the Blackstone Group – is a practice that undermines the rights of the consumer in an area that is specifically protected under UN human rights conventions. It outright stated that I-REIS REIT, the largest landlord in Ireland, and similar companies have “openly discussed policies of introducing the highest rents possible in order to increase returns for shareholders”.

“What makes this practice particularly egregious is that it is being done without any monitoring, or accountability mechanisms in place,” the report states. “Governments seem not to have made the connection that this new form of finance is taking place in an area that is governed by international human rights law, which imposes obligations on them. We remind all States, that while gold is a commodity, housing is not, it’s a human right.”

The report firmly states that the use of private equity and asset management firms in housing “runs afoul of international human rights norms and cannot continue”. In his immediate response to the report, Taoiseach Leo Varadkar said that Section 110 initiatives, which allowed large funds to register as charities and avoid paying tax, were brought in when “property prices were on the floor”.

He defended the initiatives as having been “designed to encourage businesses and firms to get involved in buying property at a time when we needed it” but added that Ireland has “bounced back and building is happening again”. The Taoiseach added that any action to be taken on tax loopholes could not be done until autumn of this year due to the fact that there is only one Finance Bill per year.

The Government’s official response to the report takes issue with its contention that “sweeping cuts were introduced notably to the public housing capital construction budget” and its references to “cuts in the public housing budget”. “These statements are entirely at odds with the factual position in recent years, with housing budgets increasing year on year,” the Government’s response says. “As reflected below, the housing budget for 2019 is just under €2.4 billion. This is the highest level of funding ever provided for housing purposes in any given year in Ireland.”

The response then goes on to state that the Government “does not accept this assertion [that the Irish housing market is in contravention of human rights conventions] and wishes to set out the legal position in Ireland regarding rights to social housing and protections in relation to private and rented accommodation”. The Government further defended itself, saying that while the Constitution “does not contain an express right to housing, there are however a range of rights and protections in relation to social housing provided for in Irish legislation”.

The Government also rejected the claims that “house prices are now approaching levels last seen at the height of the property bubble” and that housing in Ireland is now “moderately unaffordable”. “Very considerable components of the total population of households were, on average, faced with housing costs that were eminently affordable and sustainable,” the response asserts. “The average mortgage payment to disposable income ratio was 21 per cent, the average payment by households paying rent to a local authority was circa 12 per cent.” 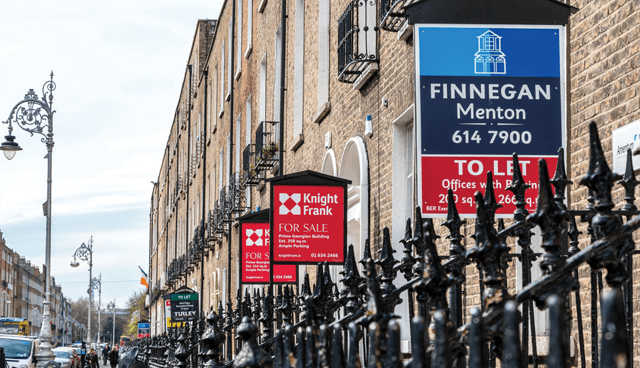 The Government also rebuked the UN for their use of “Republic of Ireland” when referring to the State, saying that “in accordance with the Irish Constitution, the correct name of the State in the English language is Ireland. It would be appreciated if this could be borne in mind in all future communications with the State.”

A recent Central Statistics Office report stated the median household income was €45,256 nationally and that two thirds of households had under €60,000 of annual gross income; the average national house price listed was €263,000 by Q2 2019, although price rises have halted in Dublin and the rate of inflation in Leinster as a whole has eased, but this has been offset by record inflation in Munster. The average monthly rent is now €1,391 nationally. This average rises to €2,023 per month in Dublin.

Emily Logan, the Chief Commissioner of the Irish Human Rights and Equality Commission (IHREC), has come down on the side of the UN, saying that the Government has “exacerbated” the housing and homelessness crisis through their policy choices. Speaking at the launch of IHREC’s annual report for 2018, Logan called the Housing Assistance Payment (HAP) “not fit for purpose” and said that it is “nowhere close to being a solution”.

She also accused the Government of “normalising” homelessness and attempting to downplay the human aspect of the housing crisis. “We [the IHREC] have been particularly concerned by the attempt by Government to underplay the human aspects of the crisis — its direct effect on the lives and well-being of men, women and children and the upheaval it is causing so many families,” she said.

“The housing and homelessness crisis cannot simply be treated as a natural by-product of market dynamics. It has its roots in policy choices made by successive governments over the past two decades and has been exacerbated by the policy choices of this Government in the past eight years.”

The Government has come under renewed pressure, both domestically and internationally, to tackle the housing crisis after the breaching of the 10,000 mark in the official homelessness figures. The Government has accepted that such figures are unacceptable and have moved to extend existing Rent Pressure Zones, while introducing another 19 zones in an attempt to tackle the rampant inflation of rental prices.