Simon Warburton, Transport Strategy Director of Transport for Greater Manchester (TfGM), discusses the journey to create a 2040 approach to transport delivery for the city region.

Setting out the context in which the Greater Manchester Transport Strategy 2040 was created and is now being delivered, Warburton highlights an area made up of 10 local authorities but with a strong history of collaboration and co-ownership of assets.

With a sizeable economy of over £56.2 billion, the city region’s strong economic position has been “reasonably strong” over the past decade and allowed for significant investment in infrastructure. As Warburton highlights, increased investment over the past 10 years was partly-driven by a failed city-wide referendum on the introduction of congestion charges in 2018. Outlining an initial investment programme of £1.5 billion which rose to £3 billion, £1 billion of which was raised through local borrowing powers, following an overwhelming rejection of revenue raising congestion charges, Warburton says: “In losing the referendum we won an argument. The argument that we won was that people could see that the relationship between their transport system and their future prosperity in a way that they hadn’t before, particularly business.”

The current population of 2.8 million people is the largest ever recorded for the city region. As a result, investment has been made to treble the size of the Metrolink over the past decade, as well as investment in busways, cycleways and transport interchanges, however, projected growth is anticipated to increase demand on the transport network.

One factor shaping the future of Greater Manchester’s future transport system is the election of Andy Burnham in 2017, to become the first directly elected Mayor of Greater Manchester. The devolution deal introduced powers for and responsibilities for the Mayor in a number of areas, including transport. 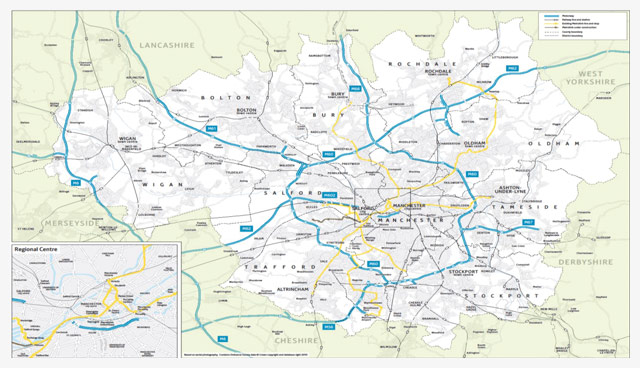 Our 2040 Transport Strategy isn’t so much about individual modes of transport. Instead it focuses on creating an integrated, sustainable, and well co-ordinated transport system that supports a wide range of different travel needs.

Discussing some of the implications of the devolution of powers, Warburton says: “We’re now involved in co-management arrangements around our rail stations and how we can use them better as points of interchange around our transport system and as points of investment. We’re also working more closely with Highways England, co-managing our road network and our motorway network in a closer way than ever before.

Devolution has also had an impact in key areas such as housing and the delivery of a housing plan for the city region; controls over skills budgets and economic needs; and new arrangements for health and social care.

Warburton says that the underlying factor in all of these areas is a recognition of the importance of ‘place’. “Place has driven our thinking in terms of where we look next and we are taking a much more place-based approach in thinking about how we develop and maintain our assets within the city region.”

Place, Warburton says, was a key basis of three core areas of policy development including a new economic strategy, a new spatial framework and the 2040 transport strategy.

The backdrop for the long-term transport strategy was the planned construction of High Speed Two (HS2), the new railway connecting the city centres of London, Birmingham, Manchester, and Leeds with an estimated completion date of 2033. As well as this there was wider recognition of the many disruptors emerging that had to be anticipated when enacting change.

The drivers of the strategy were supporting sustainable and economic growth, protecting the environment, improving quality of life and the strategies ability to constantly challenge itself in the form of innovations.

“In practice, it’s about making peoples’ lives easier and enriching communities. That means fewer trips made by car, more journeys by bike and on foot, better public transport, and towns and neighbourhoods that are safe, attractive and accessible. It’s also about supporting growth, enhancing quality of life, boosting pride of place and generating a greater sense of happiness,” says Warburton.

Setting out the challenges and opportunities in shaping the current strategy, Warburton highlights a projected population of over 3 million people in Greater Manchester by 2040, defining an ambition to deliver over 220,000 new homes over the next 20 years. This inevitably will increase demand on the transport system. At the same time, spatial disparities still exist in the region, including greater wealth in the north and east of Greater Manchester than in the south and west. There are ambitions to enhance quality of life by addressing these disparities, with transport connectivity touted as a key influence.

Place has driven our thinking in terms of where we look next and we are taking a much more place-based approach in thinking about how we develop and maintain our assets within the city region.

Transport is also the greatest environmental problem in the region. Two-thirds of NOx emissions in Greater Manchester are from car traffic, as are 80 per cent of particulate emissions. Warburton says that transport is one-third of the areas carbon emissions, and remains “the most stubborn third”.

On innovation, the Transport Strategy Director points to changing attitudes and uses of technology, including differing demands upon the organisation of the transport system. Changing demographics is also a factor, with Greater Manchester’s population becoming more urban and those urban areas becoming younger.

Warburton says that in trying to organise a system of movement and connectivity to support place, with these challenges in mind, the legacy method of developing policy around individual modes of transport doesn’t resonate with emerging demand.

“Our 2040 Transport Strategy isn’t so much about individual modes of transport. Instead it focuses on creating an integrated, sustainable, and well
co-ordinated transport system that supports a wide range of different travel needs. Naturally, our customers are at the heart of our 2040 Transport Strategy – residents, businesses and visitors alike – and we’re also mindful of the different needs of passengers and freight.”

Warburton describes the five spatial themes looking out to 2040 that have allowed them to build a vision for integration.

Discussing a correlation with the Greater Dublin Area Transport Strategy 2016-2035, He adds: “Yes we need to continue to invest in our capital assets but increasingly it’s about the softer measures and it’s about how we reposition a transport system, a public transport system in particular, in a way that resonates with modern lifestyles and with modern freedoms.”

Outlining three phases of growth in Greater Manchester’s strategy. Warburton says: “A focus out to 2020 is preparing our networks for growth, putting in place the right governance system and delivering the remaining elements of our transport system that allow us to take on the next level of growth.”

Phase two incorporates the delivery of major new infrastructure to support that growth and phase three is maximising the benefits of growth and includes the “game changing” arrivals of the likes of HS2.

“The other element we have to get smarter around is how we fund our transport system. At present we fund our system in the UK through five year funding windows but our vision is much more long-term than this. We have also got to identify new ways of realising the benefits that we can deliver through improved connectivity and returning funds into our transport system.”