The so-called “green wave” of the local and European elections was strange in that one of its most recognisable faces was one that didn’t win a seat. Fully aware of this anomaly, Green Party candidate Saoirse McHugh talks to Odrán Waldron about her campaign, the media’s power over elections and what she would have done had she been elected to the European Parliament.

“How I feel is perfectly exemplified by a recent holiday: I was supposed to be taking a break from politics and I found myself lying on a beach, squinting at my phone, looking up Paul Murphy,” Saoirse McHugh laughs, reflecting on her recent election campaign, where she finished seventh in the four-seater Midland-North-West constituency. “I oscillate between ‘I’m never doing that again’ and ‘it will never be that hard again, I should do it again’.”

After exit polls made it appear as if McHugh was on her way to claiming a shock seat, the 28-year-old grower and Achill Island native tallied over 51,000 first preference votes, 8.6 per cent of the vote, clocking in at sixth in that regard. “I’ll probably run again,” she says. “People say to me that I ran a great campaign, but I say that I don’t think I did, I think the exit poll ran a great campaign. I definitely learned a lot and I’ll have to go forward remembering those things, which are that more money gets you elected. I did enjoy it though and I wouldn’t have said that in the middle of it.”

The media attention, or sometimes lack thereof, was a situation where McHugh experienced both sides. Having previously been largely ignored by the media, strong support on social media, a well-received appearance on RTÉ Prime Time and the initial excitement of the misleading exit poll have led to McHugh becoming a national figure.

“I was eventually given attention, but [beforehand] I talked to journalists who refused to cover me,” she says. “I was being invited to talk on shows that I had previously written to begging for media exposure. I did find that the media can control who gets elected up to a point; they totally control exposure. A lot of local radio are very good at making sure that every candidate gets the same amount of time, but the national media really pick and choose.

“I understand that there’s so much to be covered, but in terms of elections I found the media to be quite reactive. You put in press releases with newspapers and they’ll tell you that you have to advertise with them to have it featured. Money plays a huge role and it’s quite unfair.”

A reactive media is one that becomes ensconced in cycles of controversy and often drums up the controversy itself when none is at hand; that is a trend that McHugh sees in Ireland and that has alarmed her. “We’ve seen certain personalities given radio shows, given enormous platforms despite incoherence, unlikability and general nonsensical policies,” she claims. “I have started worrying that if a charismatic person came along with hateful ideologies, we’d have no defences. I don’t see our media putting up a defence because they are so eager for controversy in the stead of long form interviews or investigative journalism.

“I understand that it’s down to cost, but to that I would say that there’s a really big space for state-funded media to combat that and provide a public service. I do think our media would frogmarch us into a situation like the UK or the US; to be honest it’s embarrassing, the pursuit of fake controversy. That’s how [Jair] Bolsonaro got where he is, he was brought onto a Brazilian TV show as a shock jock so everybody could scoff and now, he’s President.”

Turning to what she would have hoped to achieve had she been elected to the European Parliament, McHugh – who holds a Master’s degree in Sustainable Agriculture and Food Security from Lancaster University – says that her first priority would have been the further  reform of the Common Agricultural Policy (CAP). “There’s space for an entirely new governance structure around our agriculture,” she says.

Food as we know it is governed by so many different policy silos that are utterly disconnected. I would have loved to have helped bring in a Common Food Policy so that conflicting objectives between agriculture, environmentalism, health, trade, equality and supermarket regulation were all brought in under the one policy.

“Food as we know it is governed by so many different policy silos that are utterly disconnected. I would have loved to have helped bring in a Common Food Policy so that conflicting objectives between agriculture, environmentalism, health, trade, equality and supermarket regulation were all brought in under the one policy. As it stands, the CAP is only an agricultural production policy; it doesn’t have the tools to deal with all the issues food production is facing.”

Next for McHugh would have been Europe’s tax policy: “The flow of capital and tax avoidance is undermining countries in things like dealing with climate change and infrastructure building for climate adaption. If companies only filed one tax return and it was divvied up based on where they created their value and where those profits are taxable, I think that could gain support in Ireland because what it might do is encourage businesses to move more value creation to Ireland in order to avail of our lower tax rate.”

Third is McHugh’s wish to reform fishery laws of the EU, a wish that makes sense given her upbringing and continued residence on Achill Island. “We need a massively ambitious overhaul of our fisheries policies if we want to have any fish left,” she says, before adding sarcastically that “if nobody wants to have any fish left, then that’s fine, but people threw around the word sustainability, which seems to have meant throw back a fish here, leave a baby dolphin there”.

“At its root, the question is: if we keep doing this, will we be able to keep doing this in 10 years? As it stands, no. Once again, you see it across all industries, that there’s a few big lobby groups and they’re making it worse for everyone else. I would like to see Europe expand its climate ambition and that’s one of the things that the Greens Group, that I would have joined had I been elected, is pushing. They want a much more ambitious net zero carbon emissions target and I think we’re really need that because 2050 is not going to do it.”

McHugh is unsure whether her childhood as an Achill Islander is what made her the environmentalist that she is today, but it is obvious that the perils of living on a small island so threatened by rising sea levels has had an effect on her outlook. “I can’t tell because I don’t know what I’d be like if I wasn’t from Achill,” she explains. “The house I live in now looks over my aunt’s house that she doesn’t live in anymore because the sea destroyed it six years ago. The sea was in my house up to waist height in the 2014 storms.

“I do look around and say to myself that these houses might be gone in 20 years. When you live in Dublin you can almost forget about weather and the environment because you’re going into buildings and rain falls straight down, but you can’t really forget when you’re in Achill, because it’s right there trying to come in your door.” 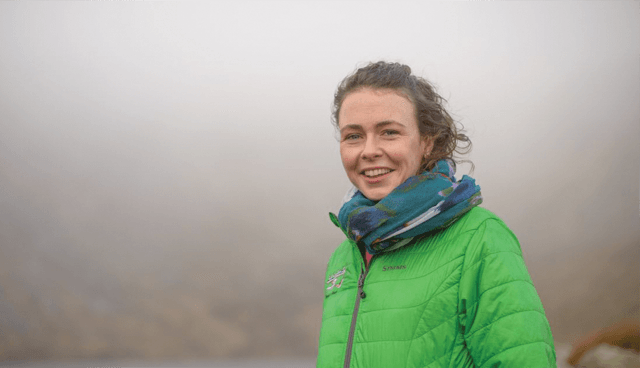 Fianna Fáil and Fine Gael need to go in together because as it stands, they are clogging up both government and opposition when really there’s no difference other than their grandfathers and great-grandfathers disagreeing. I think that would free up space for a much stronger opposition.

The added media attention in the days after the election showcased more of McHugh’s straight-talking abilities that won her such plaudits after Prime Time; the most circulated of her quotes in the aftermath being one where she stated that she would leave the Green Party if they were to enter a coalition government with either Fianna Fáil or Fine Gael after the next general election. The view that such a coalition would damage the party is one she still stands behind: “Fianna Fáil and Fine Gael need to go in [to Government] together because as it stands, they are clogging up both Government and Opposition when really there’s no difference other than their grandfathers and great-grandfathers disagreeing. I think that would free up space for a much stronger opposition.

“Both parties have consistently shown reluctance to meaningfully engage with climate breakdown and biodiversity loss. As small as we are, going in with them would set back the environmental movement by another decade. It inevitably ends in small parties being sacrificed on this altar of mediocrity and centrism. We continue this fake choice between them and this fake opposition. Not going in with them would be that stitch in time that saves nine; we would be decimated again. Fianna Fáil won’t go in as the minority with Fine Gael because everybody knows what happens to the minority.

“They’ve blocked so many bills in the last six months that proves that they don’t understand the environment. Their big climate plan now is bringing forward a microbeads bill that has been sitting there for two years. One of the plans in the Climate Action Plan is a microgeneration tariff which was tabled by Sinn Féin two years ago. The Greens have had a community energy bill, a waste reduction bill, there was Bríd Smith’s bill; it’s almost like they don’t want to do anything.”

McHugh’s emergence has been a challenge to the perception of the Green Party as soft Dublin-based liberals all too happy to be along for the ride as long as said ride includes some environmental provisions. Hers is a style that challenges the received wisdom of the Greens being anti-farmer and farmers being anti-Green. “I talked at a few Irish Natura and Hill Farmers Association meetings and so many of them were on the same page as me,” she says.

“The narrative that farmers don’t vote for the Greens is pushed hard by the media. I don’t know why they’ve taken that storyline, it’s a bit 2002. Most farmers know that they’re going to have to change and that they’re at the very forefront of climate breakdown; airplanes could fly forever if it was a barren, scorched, dead earth down here, but you couldn’t farm. Farming is in the unique position that it has an effect on climate and biodiversity but is also affected by them.

“Presenting a different vision of rural Ireland will be really important. Dublin has so much influence over how CAP is enacted, but it’s a stuck-to storyline that Europe makes us do everything. It’s important to clarify what Europe does and what Dublin does and what we have the freedom to do in setting forward an alternative vision.

“People aren’t living off the land, they’re being replaced in the west by forestry, the suckler farms are on their knees,” McHugh says. “There’s so much in rural Ireland that people want to be different. It’s pushing through this narrative that the Greens hate farmers and trying to imagine what could be that will be vital,” she concludes.