We are all too familiar with the discord and public debate over the length of time learner drivers were having to wait for a driving test appointment. Thankfully, the Road Safety Authority (RSA) have emerged from this bottleneck in recent times and there is plenty of light at the end of the tunnel, writes Moyagh Murdock, CEO of the RSA.

It is timely to give some background to how the journey has gone over the past few years and to let would-be drivers know of that the future holds for them as well as its impact on road safety. One of the major challenges that the RSA had to contend with in recent years was the Public Service recruitment embargo during the years of the financial crisis, like so many other public bodies and public services who were also affected.

The embargo’s impact was greatest on our driver testing service. As natural attrition reduced the number of testers in the service, the knock-on effect was an increase in the time candidates had to wait before being scheduled for a test.

When the embargo was gradually relaxed and we started to replace staff, lost principally through retirement, the economic climate was improving, and major policy changes were happening that further exacerbated the issue. The pickup in the economy meant improved employment prospects, reduced accommodation options and the need for a car for work and college grew. In addition to this, the legislation introduction of what is commonly called the Clancy Amendment meant that those driving on a learner permit had a major incentive to secure a driving test appointment and pass the test. The new law rightly introduced tougher penalties for those found driving unaccompanied. It also had a provision to prosecute those who provided a vehicle to a learner permit holder to drive unaccompanied. The practice of driving unaccompanied while on a learner permit has long been a practice which has been slow to change in this country. The new laws had the desired effect of encouraging many more people to come forward for the driving test, to pass and ensure the driver had demonstrated they have attained the competence to drive unaccompanied.

The RSA has always committed to maintaining a national average wait time for a driving test at 10 weeks. This had increased to the high teens in many parts of the country. 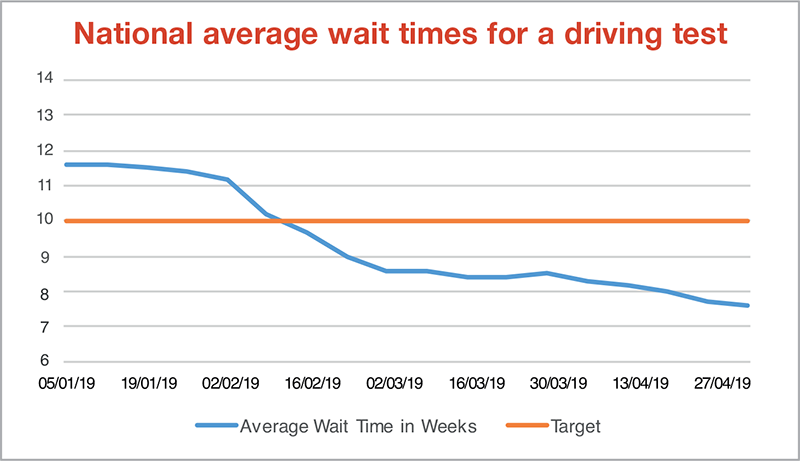 To address the issue of driver tester numbers we have recruited a total of 76 new driver testers since 2016. 52 new testers started testing in 2018 alone.

A further 14 testers started testing in March 2019 and an additional seven testers will take to the pitch in May on completion of their eight-week training course. The recruitment of these additional driver testers will bring the total number of driving testers to 160. The opening of three new driving test centres has also provided additional testing capacity. A further new test centre will be opening in Drogheda later in 2019.

While it has taken a huge effort on the part of the staff in the RSA to recruit, train and manage the challenges we have faced in the driving test over the last number of years, there are still issues that we need to address.

Despite the demand for driving tests, almost 12 per cent of candidates simply don’t show up for their test. If these candidates gave us any kind of advance warning, we could make those slots available to other customers.

There are 244,627 learner permit holders in this country. A large proportion of these drivers are on their first learner permit and are probably restricted by the mandatory lessons and six months rules before they can take a driving test.

Our focus now is to encourage these individuals to end their long-term reliance on a learner permit and to come in for a driving test.