Published in November 2021, the Report on the Processes and Procedures Applying to the Appointment of Senior Executives in the Public Service made 14 specific recommendations.

The 288-page report is the culmination of work undertaken by the Joint Committee on Finance, Public Expenditure and Reform, and Taoiseach, as well as members of the Committee of Public Accounts (PAC).

Launching the report, Cathaoirleach of the Joint Committee, John McGuinness TD, outlines the rationale for this work as being an attempt to “unravel how the decision to appoint Mr Robert Watt as interim Secretary General of the Department of Health was arrived at and how the recruitment process which ended with his appointment was conducted”.

After government formation in early 2020, a vacancy emerged in the post of Secretary General of the Department of Health. While this was filled on an acting basis, formal recruitment did not occur until January 2021. The then Secretary General of the Department of Public Expenditure and Reform (DPER), Robert Watt, was requested to move to the Department of Health on an interim basis, pending open competition. Simultaneously, the Minister for Public Expenditure and reform sanctioned an €81,000 salary increase, bringing the total salary for the permanent post to €292,000.

Following open competition, Watt was successful in his application for the permanent post and was appointed in April 2021, agreeing to waive the salary increase “until the economy begins to recover and unemployment falls”.

However, the report concludes that “no formal procedures or benchmarking processes were followed in either making the interim appointment or agreeing to a salary increase of 40 per cent for the permanent appointee”. The formal recruitment process, it suggests, should have begun in October 2020, removing the requirement for an interim appointment and “much of the difficulty that arose in this regard”. 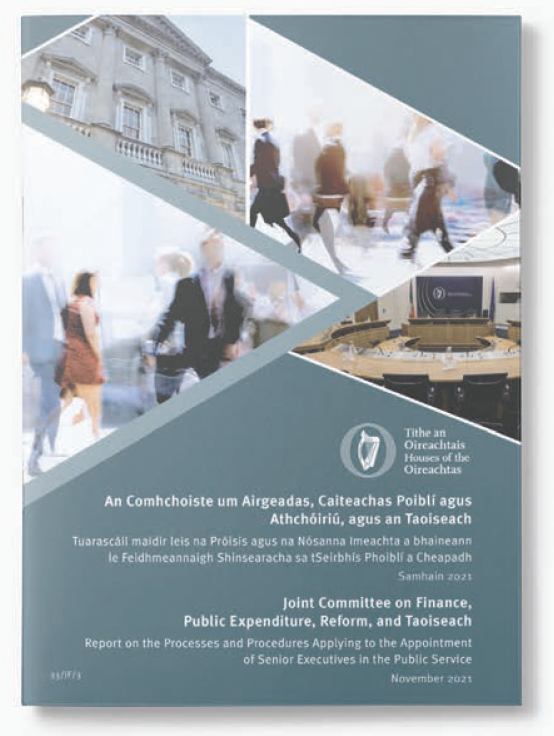 Remarking on the insufficient recordkeeping for such a significant appointment and associated salary increase, the report also criticises “the lack of engagement by the majority of those who were requested either to provide information and/or attend a meeting of the Committee”.

In total, the report makes 14 recommendations to “ensure sufficient transparency, openness, and accountability” by establishing “robust processes and procedures in the appointment and setting salaries for senior civil and public servants”. Significantly, these include a formal appointment process for all senior public service posts (interim and permanent); the re-establishment of the Top-Level Appointments Commission (TLAC) as a wholly independent body, distinct and separate from DPER; and the proposed creation of a formal Head of the Civil Service role be established “to ensure adequate oversight of secretaries general and so that disciplinary matters can be dealt with, should they arise”.

Leas-Chathaoirleach of the PAC, Catherine Murphy TD outlines: “Members of the Committee of Public Accounts were very concerned at the manner of the interim appointment to the post of Secretary General of the Department of Health and the €81,000 pay increase for the post. The complete absence of the use of normal procedures and the 40 per cent pay increase for the post required examination. The failure to benchmark the new salary to a similar position in the public service only added to that concern.”