With Ireland in the midst of a second Covid-19 lockdown, the health, economic and social effects of the country’s battle with the pandemic begin to take hold once again.

After weeks of public disagreement between NPHET and members of the Cabinet. The Government eventually accepted NPHET’s recommendation of a level five lockdown, effective from midnight 21 October 2020.

Measures introduced included the reintroduction of travel limits, with people asked to limit exercise or the permitted meetings with one other household outdoors to within five kilometres of their homes. Social or family gatherings in homes or gardens were banned but visits on compassionate grounds and for caring purposes were permitted to continue. Those living or parenting alone were permitted to form a “support bubble” with another household.

Non-essential retailers and hairdressers were ordered to close, while bars and food outlets were limited to takeaways. Limits were placed on wedding and funeral attendees, while elite sport was permitted to continue, which included intercounty GAA games after the GAA itself decided to cancel the remainder of its club games owing to pandemic worries. Despite concerns around clusters in factories throughout the State, most manufacturing was permitted to remain open.

In his address to announce the measures, Taoiseach Micheál Martin said that he was announcing what was probably “Europe’s strictest regime” after initial measures to halt the second wave had proved unsuccessful. “2020 has been a hard year and we are not through it yet; families, individuals and front-line families have sacrificed so much,” the Taoiseach said.

Martin said that schools would remain open because Ireland could “not allow our children and young people’s futures to be another victim of this disease”. He added that a successful lockdown would allow the country to celebrate Christmas “in a meaningful way”.

By the time the restrictions were announced, Ireland’s single day new case rate had risen to a new peak of 1,284 on 18 October. The number of daily new cases had steadily risen from typically double, but sometimes single-digit figures in June and July, to hundreds per day in September and then the breaching of the thousand mark in October. Between 10 October and 25 October, 10 days with over 1,000 new cases were recorded.

Despite this major uptick of new cases vastly outstripping numbers seen during the first Covid-19 wave, numbers of deaths have not yet been comparable in the second wave. While the collation of Covid-related death data can take more time than that of new cases and thus be more difficult to analyse in the immediate aftermath, as it stands the numbers of deaths in one day have only entered double digits once since May. This occurred on 20 October, the day after Martin’s address, when 13 deaths were recorded. Hospitalisations had been rising, although not to levels that had been seen during the first wave, and it is thought that the Government eventually acquiesced to the recommendation of NPHET in order to alleviate pressures that was sure to come on an already-under pressure health system unless drastic action was taken.

The Government is projecting somewhere in the region of 200,000 job losses as a result of the restrictions, but is placing its hopes on a successful lockdown and the reopening of the economy in time for Christmas for a swift recovery. The Taoiseach also announced that there would be advanced financial measures to support both businesses and individuals through the second lockdown, along with mental health support measures.

The most notable of these financial measures is the return of the pandemic unemployment payment to its top rate of €350 per week, with a sliding scale of payments depending on a person’s pre-pandemic income in operation. 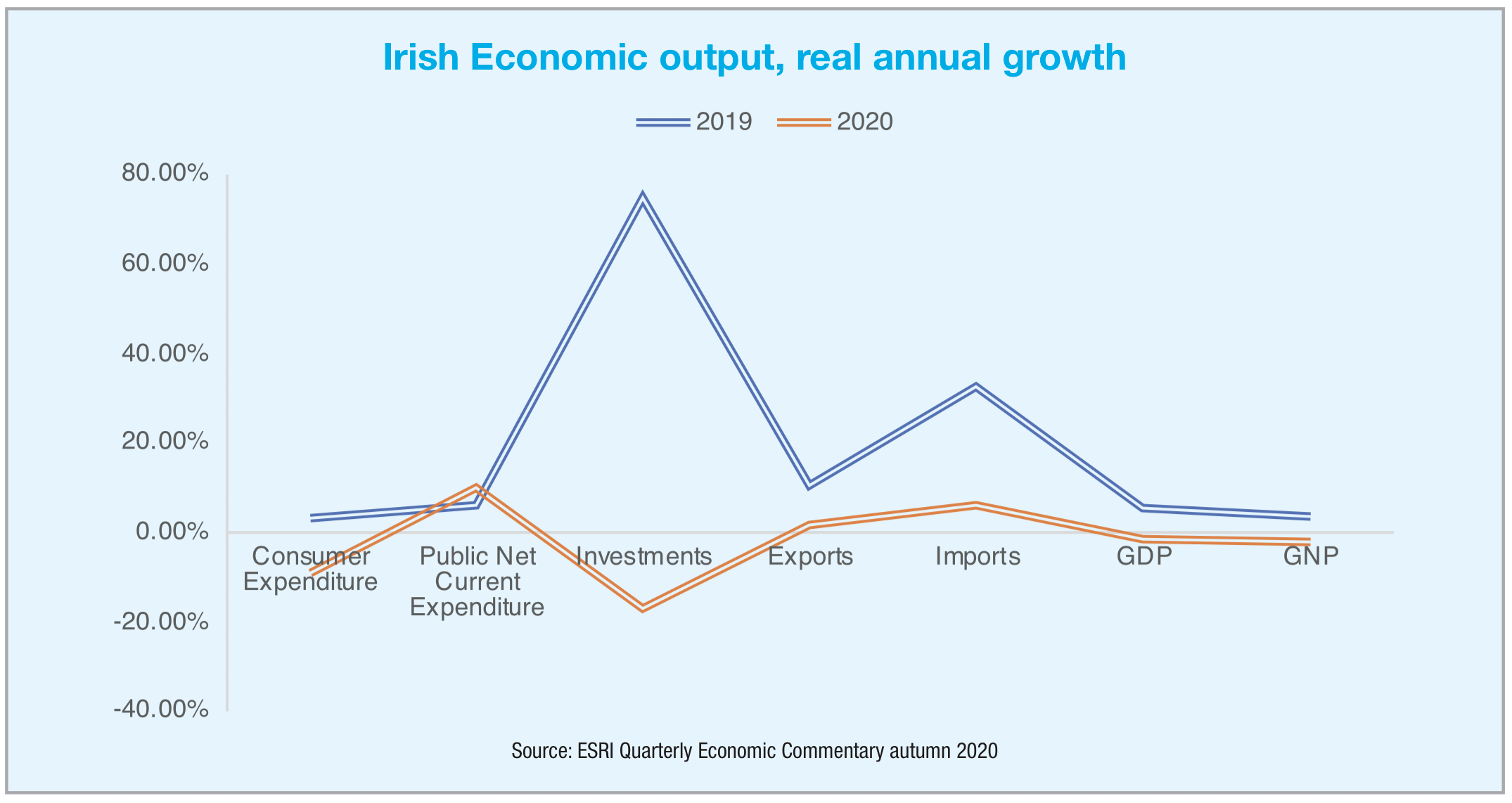 Ministers had initially rejected the recommendation from NPHET that Ireland be placed under level five lockdown just a fortnight before Martin’s announcement, with the original recommendation of four weeks having been lengthened to six weeks by the time level fives was introduced. The Government had published its five-level plan for “living with Covid-19” in September that ranged from relaxed measures in level one to the most severe measures in level five.

The majority of the State had been in level three when the measures were announced, with the exception of border counties Cavan, Donegal and Monaghan, who were placed in level four restrictions after the tightening of restrictions in the North by the Stormont Executive.

In terms of the economic impact of the pandemic, the Economic and Social Research Institute’s (ESRI) latest quarterly economic commentary has said that Ireland’s domestic economy has felt the “notable shock” of the pandemic to a worse extent than other European countries. The ESRI predicts that Irish GDP will fall by just 1.8 per cent this year, but predicts that consumer expenditure – which the ESRI argues is a better metric by which to gage national economic welfare – will fall by 9.2 per cent for the year, after it fell by over 20 per cent during the first lockdown period. Only the UK and Spain were found to have experienced worse declines according to the ESRI’s analysis.

The report noted that consumer spending had recovered and predicted a return to growth in Ireland by next year, although it must be remembered that this prediction was made before the spike in cases and the second lockdown, which will almost certainly mean such a prediction will have to be revisited. The ESRI says that such a strong shock was absorbed by the Irish economy due in part to the fact that Ireland “had one of the strictest and longest lockdowns in Europe”, which among other things meant that construction’s value added to the economy fell by 38 per cent in the first half of the year, the worst decline in Europe.

Value added by the arts and entertainment sector also fell by 70 per cent over the first six months of the year, again the largest decline in the EU. The report states that the lockdown “closed many public amenities, and restricted group entertainment activities” meaning the decline was “far greater than for any other country”.

As the economic fallout from the first lockdown begins to become more clear, with the ESRI reporting unemployment at 14.7 per cent in September, it now remains to be seen how badly the second lockdown will aggravate the wounds still open from March and April.