Two robots designed in Trinity College Dublin have been receiving international attention, providing an insight into the future of what robotics and artificial intelligence could offer to the fields of pandemic response, hospital hygiene and social care for older and disabled people.

In the midst of the Covid-19 pandemic, a start-up founded out of Trinity College Dublin’s Robotics and Innovation Lab has unveiled a bacteria-fighting robot that is being used in the fight against the spread of the coronavirus.

Robot Violet emits ultraviolet light (UVC) and has the ability to disinfect hospitals and rid them of the Covid-19 virus. The robot, developed by Akara Robotics, has been clinically proven to kill viruses, bacteria and germs and it is claimed that it can do so in a time shorter than the typical cleaning of hospital rooms. The robot has been tested in an acute hospital in the Dublin area after Conor McGinn, CEO of Akara and Assistant Professor at Trinity, had contacted the HSE to offer its services in tackling the pandemic.

It is said that the robot could reduce hospitals’ dependency on the use of chemical-based solutions, which, while effective, require rooms to be vacated for hours at a time, an impracticality given the fact that hospital capacities are being pushed to their limits by the virus outbreak. Violet is also said to be useful in the treatment of high-tech equipment that is unsuitable for disinfection using deep chemicals and typically requires manual cleaning.

Violet operates using ultraviolet germicidal irradiation at short wavelengths to break down DNA in microbes, stopping them from replicating. With viruses, this means that the spread of infection can be stopped. This technology has been used in other countries, but Violet is the first instance of its use in Irish medicine. In medicine, the cleaning of equipment and areas is often a time intensive process. For example, a CAT scan takes just a few minutes to complete, but roughly an hour to clean in the aftermath; a hospital room can also take up to five hours to sterilise, but Akara have expressed their hope that Violet can halve that time. They have also said, however, that the washing out of a room using UVC bathing is best done as a compliment to other methods.

While UVC is known for the damage it can do to the skin and eyes of people, Violet has a ranger of safety features that allow it to be utilised in human traffic-heavy places such as hospitals. For instance, it uses artificial intelligence to shut down if a human unexpectedly appears in front of it while it is operating.

Akara, currently employing seven people after growing out of the Robotics and Innovation Lab at Trinity, have said that they are capable of producing up to 50 Violets for the fight against Covid-19, with the first said to be ready for deployment if test results from the trial run carried out prove its usefulness.

Before the outbreak of Covid-19 and the deployment of Violet, Akara had been drawing international headlines for its work in the social care field with Stevie, a robot designed for deployment in retirement communities and homes for the disabled.

Stevie the Robot has recently finished a pilot trial in a residential community in Washington DC and was featured on the cover of TIME Magazine’s health innovation issue. Unveiled in May 2019 at the Science Gallery Dublin, Stevie, currently in its second iteration as Stevie II, is Ireland’s first socially assistive robot. Where the original Stevie served as a proof of concept that a socially assistive robot could be deployed in a long-term care environment, Stevie II builds on that with technological upgrades and advanced AI capabilities.

Stevie II is said to be “considerably more mobile and dexterous” and uses advanced sensing technologies such as laser rangefinders, depth cameras and tactile, inertial and vision sensors in order to interact with its surroundings. Wireless connectivity functions such as WiFi and Bluetooth, paired with a series of onboard computers, allow Stevie II to diversify its potential uses. Along with these new technical capabilities, Stevie II also possesses enhanced expressive abilities.

Speaking at the time of Stevie II’s launch, McGinn said that Stevie being so expressive “helped to humanise the technology” and that the insights provided by this “lead us to believe that a robot like Stevie can have a wide range of high-impact uses, which may involve performing numerous assistive tasks, helping caregivers, and may even provide new interfaces to existing technologies like video calling, smart sensors and social media, that can be inaccessible to many older adults”.

Trinity have partnered with ALONE, an organisation that uses technology in order to facilitate people ageing at home and remaining independent and socially connected. They have also partnered with the US-based non-profit Army Distaff Foundation, which operates the Knollwood Retirement Community, where Stevie II conducted its pilot programme with staff and residents and was profiled by TIME. Videos from the community show residents attempting to have Stevie perform the YMCA dance moves during a karaoke night, but also how the 4’7” robot glides through halls and answers to “hey Stevie” similar to the Alexa and Siri AI systems. Though capable of moving around unassisted, Stevie is never unaccompanied due to insurance and safety reasons. 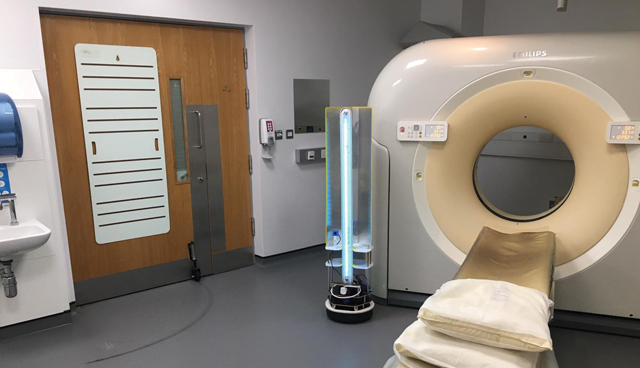 Preliminary findings suggest that the Violet robot could disinfect rooms faster and more effectively than traditional chemical-based methods – this has the potential to protect staff and could go a long way to restoring capacity of critical front-line hospital equipment.”
Conor McGinn, assistant professor in Trinity’s School of Engineering and co-founder of Akara Robotics.

Stevie recognises resident complaints such as “I’m sick” (to which he responds: “I’m sorry to hear that” with a frown on his LED screen face) and can also react to potentially dangerous situations. For instance, if Stevie is fully integrated into a community’s IT system, a patient saying “help me” to the robot can alert staff in the area that a potentially life-threatening situation is developing.

For now, more trial periods are planned for Stevie II, with an extended stay in Knollwood and a UK trial in Cornwall as part of the EU-funded EPIC project pencilled in. As people live longer and the capabilities of AI progress, all eyes will be on Stevie’s ability to marry the two worlds and usher in a new era of social care.