Unveiled in February 2018, Project Ireland 2040 laid out Ireland’s framework of growth for over 20 years. A year on from the €116 billion plan’s publication, eolas appraises how the goals expressed within have progressed and what issues have arisen in that period.

More forward looking than any previous infrastructure planning in state history, the framework predicts that Ireland’s population will grow by one million people by 2040, with two thirds of them working. Project Ireland 2040 set forth a plan to build or acquire an additional 500,000 homes (between 25,000 and 35,000 per year) to meet the current and future housing demand, with 112,000 social homes to be built by 2027.

The Land Development Agency (LDA) was launched in September 2018 as part of the plan. It was founded with an immediate focus of using existing lands to develop 150,000 new homes and regenerate unused and underused state lands. Modelled on “best European practice as already demonstrated in Germany and the Netherlands”, the LDA is a state-sponsored commercial body with €1.25 billion in state capital backing. Included in the LDA’s remit is also the “strategic land assembly” of private sites, an aspect that has provoked warnings for restraint to be shown due to its similarities to the pre-recession instruction from the Government to local authorities to buy private land for future housing developments, a scheme that ended with the Government defaulting on €600 million of loan debts.

Despite the number of new homes projected within the plan, the report for the third quarter of 2018 compiled by the Government’s Dublin Housing Supply Task Force showed that the number of homes under construction in Dublin city were down 50 per cent for the year, with the number down 20 per cent in the Dublin region as a whole.

There was good news in the form of the number of home completions more than doubling in the year, from 644 to 1,336. Fingal was the only area within the Dublin region to see an overall increase in homes under construction, with a small rise from 2,260 to 2,348.

With such numbers proving that there is much work to do to meet the plan’s goals, some criticism has centred on the LDA’s remit allowing up to 60 per cent of houses built on land it purposes to be sold into the private market, essentially privatising vast swathes of public land when social housing is needed to address a homelessness and housing availability crisis.

The pace of growth across the construction sector has also slowed, according to seasonal data collated in the Ulster Bank Construction Purchasing Managers’ Index, published in February 2019. The index found that output growth was at a three-month low and that the pace of employment gains had also dipped. It warned of rising material costs, specifically in steel and insulation material. The report found that growth was strongest in house-building.

The index’s contention that civil engineering activity is in decline is supported by the annual Engineers Ireland report, published in March 2019, which found a 55 per cent drop in the number of engineering graduates in the last five years. Engineers Ireland have warned that 6,000 engineers will be needed in the next year and that the sharp decline in their numbers could undermine the delivery of all planned infrastructure within Ireland 2040, not just housing.

Project Ireland 2040 includes significant works to the country’s transport infrastructure, with €7.3 billion set aside for regional roads. Plans abound for an Atlantic road corridor, connecting Cork, Limerick, Galway and Sligo, which would include the M20 motorway between Cork and Limerick.

“Fears remain that the southern line of the MetroLink could be abandoned due to plans to join it on to the Luas green line that have been projected by Shane Ross TD to disrupt the Luas for up to four years. Taoiseach Varadkar refuted the claim of Eamon Ryan TD that the Government were ‘abandoning the southside’ by considering alternatives.”

Cork will see further investment in the shape of €90 million for the improvement of Ringaskiddy port and a light rail corridor. A further €230 million has been pledged for work on Dublin Port.

Transport in the Dublin area is due a major overhaul with plans for the MetroLink progressing, a mooted DART expansion to Drogheda, Maynooth, Cellbridge and Greystones, the BusConnects plan to transform the city’s bus system and four new Luas lines to Lucan, Bray, Finglas and Poolbeg to be appraised.

Fears remain that the southern line of the MetroLink could be abandoned due to plans to join it on to the Luas green line that have been projected by Minister for Transport, Tourism and Sport Shane Ross TD to disrupt the Luas for up to four years. Taoiseach Leo Varadkar refuted the claim of Green Party leader, Eamon Ryan TD, that the Government were “abandoning the southside” by considering alternatives. The Taoiseach said that the Government was listening to the issues raised by the local communities.

When it was put to the Government by Labour Party leader, Brendan Howlin TD, that the Government was doing the opposite of listening to communities with the BusConnects scheme due to what he alleged to be the role of unelected officials in its planning, the Taoiseach said that he was “agnostic” about a debate on the twin issues.

Project Ireland 2040 contained ambitious plans for health in Ireland to meet the demands of a growing population living longer than ever. Plans included 2,600 new acute hospital beds, 4,500 new beds in community nursing homes, a new hospital in Cork, as well as elective-only hospitals in Dublin, Cork and Galway. A new emergency department for University Hospital Limerick, new outpatient facilities at Tallaght and Connolly Hospitals were scheduled along with the new National Forensic Mental Health Service Hospital and the completion of the National Maternity Hospital and the now controversial National Children’s Hospital. 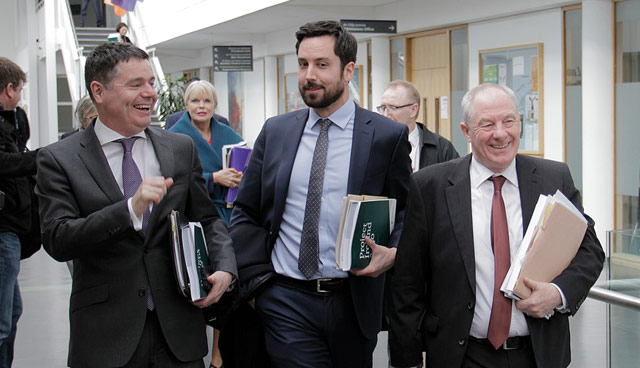 “Project Ireland has been criticised for planning towards 2040 in Ireland without mentioning the possibility of a successful border poll, the likelihood of which has been increased by Brexit. Pearse Doherty TD, discussing the Derry/Letterkenny plans in the Dáil, called the framework a ‘partitionist development plan’.”

The Children’s Hospital overspend has created a situation whereby funds allocated in Project Ireland 2040 have had to be juggled, including and updating of the scheduled draw-down of €16 million from two regeneration funds, which are now profiled for spenidng throughout 2019 and 2020.

The projected population rise has been estimated to happen predominantly within the State’s five cities (Cork, Dublin, Galway, Limerick and Waterford). 75 per cent of the Republic of Ireland’s population is expected to live in urban areas by 2050 and 50 per cent of predicted growth in population, housing and employment is due to happen in the five cities.

€2 billion has been allocated to urban regeneration, with a further €1 billion assigned to rural development. Portlaoise has been designated to serve as a pilot for urban regeneration to be followed by other towns. €100 million of the urban fund has been allocated on over 80 projects for the year 2019. Tipperary Town has recently been awarded €600,000 of the rural fund to regenerate two zones, Market Yard and the River Ara area, within the town.

Funding is due to be allocated to the Dublin to Belfast corridor in an effort to mitigate the effects of Brexit, with Dundalk, Drogheda and Newry specifically targeted for growth. Newry is mentioned 10 times within the framework, with plans made for “co-operation with relevant departments in Northern Ireland” to grow the town. Funding is also being given to the North West Strategic Growth Partnership, a conglomerate of Donegal County Council and Derry City and Strabane District Council, to grow the Derry/Letterkenny city region.

Despite its plans for Brexit mitigation, Project Ireland has been criticised for planning towards 2040 in Ireland without mentioning the possibility of a successful border poll or planning infrastructure expansion in the event of a united Ireland, the likelihood of which has been increased by Brexit according to various polls. Sinn Féin TD Pearse Doherty, discussing the Derry/Letterkenny plans in the Dáil, called the framework a “partitionist development plan”.

While the Cork Chamber has been critical of the plans for areas outside of Dublin, claiming that they lack the necessary ambition, Frank Crowley of University College Cork’s University Business School has warned against attempts to spread growth outside of cities. Citing the historical precedent of national growth dropping when governments have attempted to widen the geographical sphere of growth within their countries, Crowley warns that the Government is better focusing on Dublin and that the only effective way to plan for 2040 is to “start with the expectation of our economy being even more unbalanced in 2040”.

Ireland 2040: Will it be implemented, and does it go far enough?