Mellissa English, the chief parliamentary legal adviser to the Houses of the Oireachtas, has been at the centre of the Office of Parliamentary Legal Advisers’ (OPLA) overhaul and expansion for over a decade. Prior to that she practised as a barrister. She speaks with Odrán Waldron about her role and office, legal challenges against Parliament, Private Members’ Bills and senior management roles within the Houses of the Oireachtas Service.

English was originally appointed as the sole legal advisor to both Houses in 2007, but now the OPLA, under her stewardship, is a statutory office, comprising a multi-disciplinary team of barristers, solicitors, legislative drafters and specialist researchers. The OPLA team provides a full range of independent legal services to the Ceann Comhairle and Cathoirleach, members and Committees of the Houses, and parliamentary civil service staff who support the running of Parliament. “The OPLA legal unit had to be designed, structured and resourced over the last 12 years,” English says in her office in Kildare House, “which, as a major change management process, was challenging, but very rewarding.”

A major expansion has happened in the OPLA since a decision of the Sub-Committee on Dáil Reform to extend the functions of the office. The Sub-Committee, which was chaired by the Ceann Comhairle, comprised a cross-party team of deputies elected to the 32nd Dáil. On foot of this decision, the office underwent a capacity review, resulting in what has become known as the Dunning report, in December 2016. The report recommended the restructuring of the office and the acceptance by the Sub-Committee on Dáil Reform of some of the recommendations has led to the office becoming tripartite in its operations. It is now responsible for: corporate and parliamentary legal services, including litigation; legal advisory work for both members and committees regarding Private Members’ Bills (PMBs); and legislative drafting for PMBs.

Legislative drafting is a specialist skill which, English says, “was not, at the time of writing of the Dunning report, within the competence of the lawyers that were in the unit” given that until the Dunning report all legislative drafting had been handled by specialist lawyers within the Office of the Parliamentary Counsel, part of the Office of the Attorney General. As recommended by the Dunning report, therefore, the Oireachtas appointed a Parliamentary Legislative Drafter, a principal officer level post, following an open application process to address this need, together with a number of trainee drafters.

The Sub-Committee on Dáil Reform also recommended that the OPLA be established on a statutory basis to underpin its independence. The rationale for this decision arose from concern expressed by non-government deputies that there was inadequate independent support available to them in relation to the provision of legal advice on policy matters, particularly where the government put forward a position, based on legal advice from the Office of the Attorney General, which Members considered they could not independently test. The Houses of the Oireachtas Commission (Amendment) Act 2018, placed the OPLA, along with the Parliamentary Budget Office, on a statutory footing. The move has been welcomed by English. It will, in her opinion, “put beyond doubt that the services offered by the OPLA are absolutely independent and impartial”.

English says that the restructuring has allowed for the smoother running of the office, allowing it to better fulfil its duties.

Over the past decade, English says, there has been a marked increase in the instances whereby the performance by Parliament of its role has been the subject of judicial examination, where both justiciability and the lawfulness of parliamentary actions fall for determination by the courts. In particular, what has fallen for judicial determination, she says “are the parameters within which Parliament can act to sanction one of its own members, the competing rights arising in terms of Parliament’s right to be ‘master of its own affairs’ and the constitutional rights which are to be afforded by parliament to its own members”.

“At this point in time, Parliament is currently awaiting judgements from the Supreme Court on the balance to be struck when competing constitutional rights collide in a parliamentary setting, such as the rights of parliamentarians to absolute privilege in respect of their speech in Parliament and the sometimes competing rights of outside persons whose personal constitutional rights can be adversely affected by this speech.” 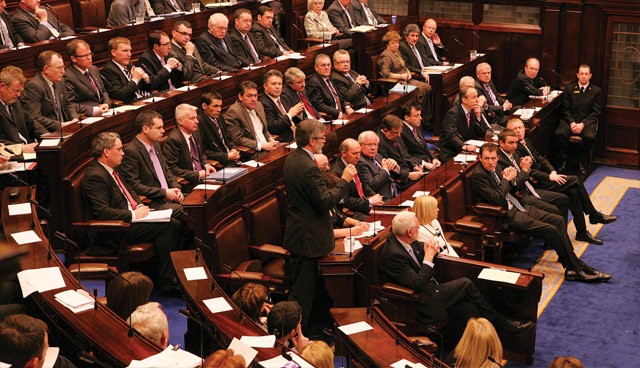 “Any attempt by parliament, by their parties,
or by the Civil Service staff to in any way hinder that ability to introduce legislation would not be welcomed by members.”

As a result of the minority government established after the last general election, both Houses have seen a substantial increase in the number of non-government members wishing to introduce their own legislation known as Private Members’ Bills (PMBs). English’s office assists members of the Oireachtas who are not members of government with the drafting of bills to be brought to the floor of the Dáil or the Seanad. While English is keen to stress that the process is not obligatory and members are free to draft their own bills without recourse to the OPLA, the reform has led to an increased number of PMBs reaching the floor of each House.

So much so that the volume of PMBs has drawn criticism from some quarters. The parties have alleged that the sheer number of bills to be debated during Private Members’ speaking time has led to the opposition having more say than the Government in how Dáil business is conducted. Stressing that her position is impartial, English says that TDs and Senators, regardless of party affiliation, Government membership or lack thereof, “have a right as legislators to introduce legislation”.

“Any attempt by parliament, by the parties, or by the Civil Service staff to in any way hinder that ability to introduce legislation would not be welcomed by members,” English continues. “Our function as lawyers is not, in any way, to create any form of barrier to Members introducing legislation. We can simply help them by drafting and developing one bill at a time. Thereafter, it’s up to the operation of the Houses and parliamentary procedure; that’s what controls how many bills make it through the process.” 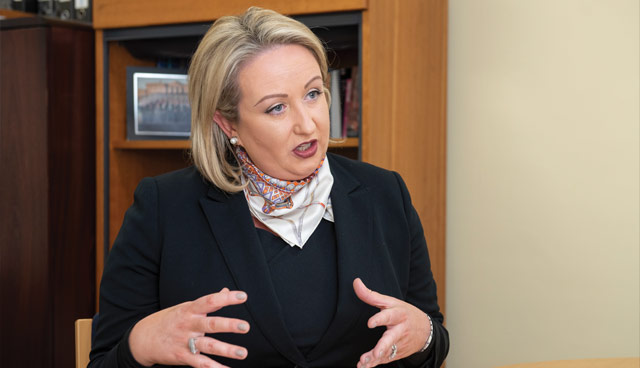 “The legal profession itself, a decidedly male occupation at one point in time, is showing the trend of narrowing that gender gap. In recruitment campaigns for lawyers for the OPLA in the last decade, we have certainly noticed substantially more women applying for the posts than men.”

Speaking to eolas in 2018, Peter Finnegan, the Clerk of Dáil Éireann and Secretary General of the Houses of the Oireachtas Service, claimed that the passage of between six and eight PMBs in the course of a Dáil would represent success, and English agrees. However, multiple PMBs have, up until now, encountered the problem of not obtaining what is known as a money message and thus failed to make it to the floor of the Dáil.

While members are free to attempt to introduce legislation, the appropriation of public funds remains the exclusive domain of the Government, which means that any PMB that requires the use of public money must be granted a money message by the Government before it can progress to Committee stage.

This is also an area where reform is happening, as English explains: “Parliament and Government have recently agreed a Memorandum of Understanding which, in effect, has two purposes: the first is to establish a transparent parliamentary scrutiny process for PMBs to ensure they are fit for purpose and legally sound, and the second is to establish a process for a timely response from Government to those bills which require a money message. Once a PMB has undergone its scrutiny process, if it is a PMB requiring a money message, then Government either has to give a money message within six weeks, or a reasoned response as to why they’re not giving one.”

The recent expansion to the work of the OPLA will now see the unit assisting members in legally developing their proposal and then drafting that proposal into a PMB. A separate legal adviser within the unit will also provide legal advice to the Committee conducting the scrutiny of each PMB. English is keen to point out that while the provision of legal advice by the OPLA to the Committee conducting scrutiny is a mandatory process, members themselves are not obliged to use the OPLA services for drafting purposes. “It is the aim of the OPLA”, says English, “to target those members with genuine legislative intent.  It is hoped that, for those members who wish to progress their proposals through to enactment, the OPLA’s end-to-end legal advisory and drafting services will provide members with legally sound PMBs. New legal support services such as these take time to build, and time to establish buy-in. We are now working on the latter.”

Women in the Oireachtas

English says that this is “obviously very encouraging for professional women”. In the legal field too, she sees improvement.

“The legal profession itself, a decidedly male occupation at one point in time, is showing the trend of narrowing that gender gap. In recruitment campaigns for lawyers for the OPLA in the last decade, we have certainly noticed substantially more women applying for the posts than men. Our current breakdown is 30 per cent men and 70 per cent women lawyers.”

Reflecting on her 12-year career within the Oireachtas so far, English says “that the Oireachtas Service as a work place is certainly very inclusive and encouraging of women in their professional lives”.