Following the securing of the contract by Transdev Dublin Light Rail Limited to operate and maintain the Luas, Managing Director Seamus Egan speaks to Owen McQuade about the integration of a newly structured organisation, the Covid-19 response and the introduction of Lean efficiencies.

The decision to award Transdev the Operation and Maintenance contract for the Luas by Transport Infrastructure Ireland (TII) and the National Transport Authority (NTA) came after a 15-year delineation between the operator, Transdev, and the maintainer, most recently, Alstom.

The contract, which came in to force on 1 December 2019, brought with it wholesale changes within the organisation, which has been operating the Luas light rail network since 2004, as it sought to not just transfer Alstom employees to Transdev but create a fully integrated team through sweeping reorganisation.

Egan explains that in the six months until the contract became active, following the conclusion of the international tender process, Transdev initiated a significant change process, including a communications strategy and input from change experts to support the mobilisation.

“The top line was that we had brought maintenance and operations under one roof, which sounds like a simplification of process. However, our approach was much more integrated and complicated than that,” he explains.

“We haven’t just joined the two organisations together. Instead, we’ve created brand new work structures where many areas of the business have been integrated, facilitating the creation of new roles and changes to those existing roles.”

The Operation and Maintenance contract was granted for six years, plus an option for five additional years. Under the Transfer of Undertakings Protection of Employment (TUPE) regulations, Alstom and Veolia employees, with responsibility for ensuring maintenance works for the Luas network, and STT security staff joined around 350 staff of Transdev already presiding over the management of 42km of tracks, three depots and 73 light rail vehicles. Staff numbers of the new organisation are 600.

“We recognised that there were different cultures and we were sensitive to the perception that Alstom’s maintenance and STT’s security staff were joining an existing organisation. We wanted to make it clear that the new Transdev, after 1 December 2019, was a new working environment and that even existing Transdev staff were moving to a new organisation post-contract award. We’ve been emphasising that it’s now one culture, one team: team Luas.”

Egan explains that preparation work included the scoping of each individual role and the necessary adjustments to jobs to best meet the new working environment. The consequence was the creation of opportunities for people to progress but also vacancies, which Transdev are actively seeking to fill.

“The switch has been both interesting and challenging but it will pay dividends, ultimately for the customer over the next six and hopefully 11 years.”

Highlighting how Transdev has initiated major changes rather than simply adjusted its processes, Egan adds: “We didn’t just base integration on the scope of the new contract. Our bid team reviewed the previous 15 years and took an explicit decision to build the organisation from a greenfield site perspective.”

An example Egan points to is Transdev’s new look Network Management Centre, a significant change from the legacy control centres, which housed only traffic supervisors. 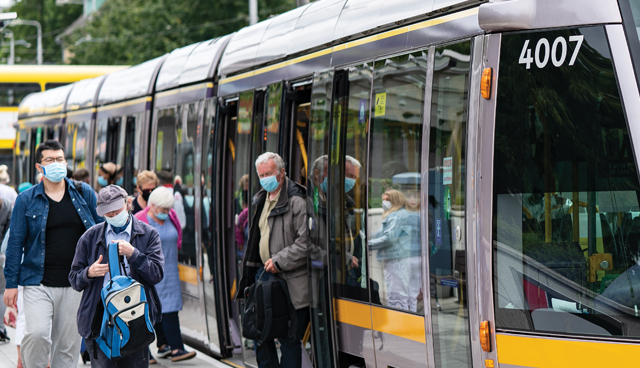 “We haven’t just joined the two organisations together. Instead, we’ve created brand new work structures where many areas of the business have been dovetailed, facilitating the creation of new roles and changes to those existing roles.”

“Our preparation work identified gaps between the control centre and maintenance staff, customer care and the management of our customer agents. To address that disconnect we have physically expanded that control room to a Network Management Centre, which includes not only traffic supervisors but also duty asset controllers, serving as an interface between control and maintenance. This has facilitated greater levels of collaboration and co-ordination between operations and maintenance to drive efficiencies of the service.

“Additionally, we put a representative of the Luas Customer Service Centre in the Network Management Centre, allowing for the distribution and gathering of real time information to and from customers in relation to disruptions.” 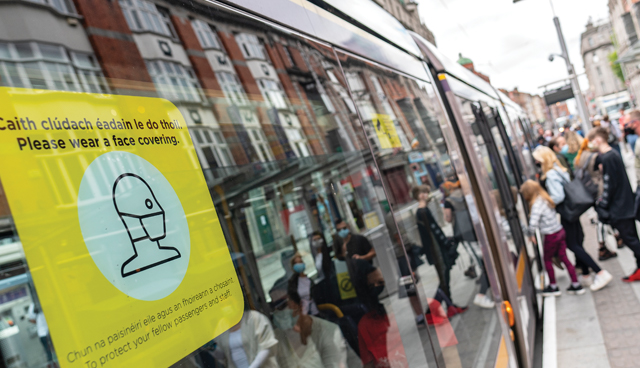 Also now positioned in the Network Management Centre is a Luas Duty Manager, a new role created by Transdev to ensure that a senior manager is onsite 24/7 with responsibility for the delivery and performance of Luas services.

“Again, implementation of the plan was challenging but we’re already recognising the benefits of greater levels of co-ordination through greater efficiencies and I believe the Network Management Centre will be key to operations going forward.”

“The culture we want to create is one where every member of staff feels that they are delivering for the customer.” 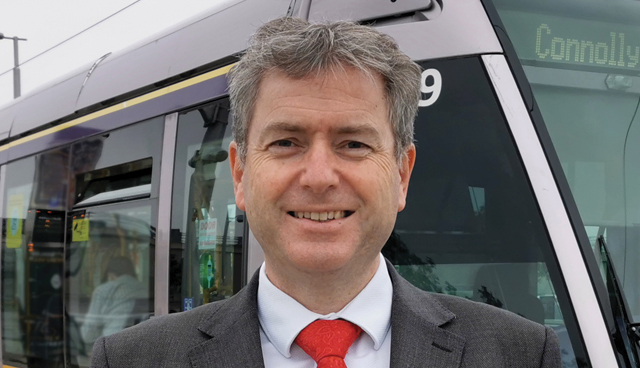 Understandably, Egan’s transition year of 2020 has been somewhat disrupted by the effects of the global pandemic. However, he is confident that the organisation’s past and forward planning will enable it to deliver on their ambitions.

Egan credits Transdev’s early recognition of the risks, associated with what was then happening in other parts of the world, to its continued delivery of services.

“In early February we included Covid-19 in our risk register, meaning that we anticipated changes to our timetables, potential high levels of absenteeism and a shut down. It meant that when the nation had to respond as a whole, we were ahead of the curve somewhat,” he explains.

Operationally, Transdev initiated deep cleans of their trams and terminuses and immediately rolled out remote working for staff where possible. Once lockdown commenced, Transdev launched an intensive management and communications programme, including twice-daily meetings of Transdev’s executive team, its head of safety and the communications manager.

The result was that not only was Transdev able to keep open a regular line of communication with staff, but was also responsive to staff concerns and queries.

In parallel, Transdev participated in an unprecedented process of integrating its operations with the NTA, TII and the other transport operators.

“We needed a cohesive integrated approach across all public transport operators and met with them three times a week, to ensure that we were learning from one another and that information coming from the Department was being disseminated in an efficient and timely fashion.

“Those meetings are continuing and those relationships are important to ensure that we are responding accordingly to the various challenges that have and continue to arise.”

Egan’s assessment is that all transport operators deserve credit for their role in maintaining levels of service throughout lockdown.  However, he reserves specific praise for his own staff: “I’m particularly proud of Transdev staff because we have not reduced our timetable and I think we’re the only light rail operator across Europe not to do so. It’s a testament that our staff maintained the service and played their role in transporting essential workers.”

Describing the operations of Transdev as at a “new steady state” since April, Egan stresses that he and his team are not complacent about future risk.

“As part of our risk management, we’re preparing our response to a potential second outbreak [of Covid-19]. We recognise that just because we haven’t had an outbreak within Transdev that it doesn’t mean we can’t do better and so, we’re constantly revisiting our operations and plans. News of outbreaks elsewhere have brought home the potential risks of complacency and we’re striving to ensure that that’s not the case.”

As Ireland emerges from lockdown, and more greater levels of normality resume, Egan is eager to drive forward with Transdev’s evolution. In line with the
re-organisation, he has ambitions to continue the role-out of continuous improvement of delivery to the customer.

“The culture we want to create is one where every member of staff feels that they are delivering for the customer. When staff are appreciated, supported and are given autonomy to complete processes that’s when huge efficiencies are created.”

Egan’s model of Lean, which he has initiated across Transdev, is based on a model he has seen successfully rolled out across other industries, specifically medical devices. Transdev has identified nine local ambassadors across the business, offering them training and support in leading Lean projects. The Managing Director explains that offering high levels of autonomy, as well as ring-fenced budgets for initiatives, will drive the championing of Lean processes across the organisation.

“We’re still in an early phase of our Lean approach but I have ambitions to roll it out across the entire organisation. I want everyone to feel that they own the scope of their work and, if they can contribute to making that more efficient, that they have the authority to come and pitch it and that we support them in getting that done.”

Egan highlights that Transdev’s operations of the Luas have been historically efficient, however, he recognises that opportunities still exist.

“A steering group involving myself, some of our Executive team, Transdev Global Lean Corporate team and the local Lean ambassadors meet regularly and ensure that those ambassadors know they have our full support and assurance that this is how we are driving the organisation forward. 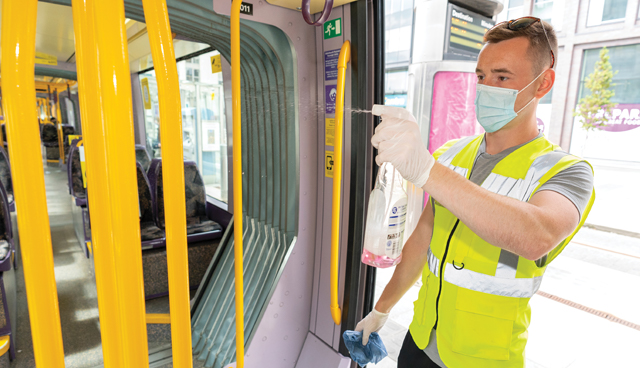 “We’ve already seen this initiative drive improvements in relation to, for example, our processes for maintenance examinations. We’ve also rolled out training to our HR department, safety department and training to duty managers. This training is being led by a local Lean co-ordinator and backed up by the ambassadors.

“I see Lean processes as key to our future operations. We’ve assumed many advantages to this over the lifetime of the contract, so we’re pushing hard on it.”

Turning to the future, Egan highlights that the remainder of 2020 will continue to see the organisation transition. However, he stresses that all work will be towards the goal of delivering the best customer service and optimising operations to improve customer satisfaction.

Outside of the Luas, Transdev, as a private company, have in the past bid for other transport operations and while it’s not currently on the “strategic horizon”, Egan says that it’s something they might re-visit in the coming years.

“We’ll also be keeping an eye on MetroLink, which we see as vital to the development of Dublin and where we feel there is an opportunity to avoid the mistakes of the past. The 2009/10 recession saw Metro North paused indefinitely but I feel that, even in a recession, as a nation we should continue to plan and work on large infrastructure projects, to the point where they are ready for going out to tender.

“In the context of Ireland’s boom and bust economy, we must be ready to go in that moment when the economy picks up.

“What we have heard so far from the Minister, that the MetroLink is still on the cards, is good news and we hope that the Department and the Government proceed with it.”

Seamus Egan entered the labour market in 1990 as an apprentice fitter/turner with Iarnród Éireann. After qualifying, he studied Mechanical Engineering at DIT before joining the Galway-based medical device company Medtronic. In 1999 he joined HP as a process engineer and then moved to Project Manager (in addition to Contracts Manufacturing Management) in a seven-year period. Seamus joined Transdev as Contracts Manager in 2006 before moving on to be Performance Director. In 2018 he was appointed Managing Director. Seamus is married to Ruth with three children, a son Jake and  two daughters Aislinn  and Aoibhín both of whom have profound disabilities and complex medical needs and who require 24/7 medical care. This has given him a sharp interest in accessibility issues across the transport network. Outside work he likes to relax by playing music. 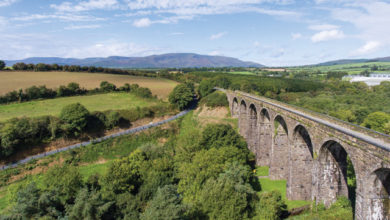