“Substantial and sustained investment” from the Government and accommodating population growth are vital to ensure that Ireland’s water infrastructure deficits are addressed, according to Minister for Housing, Local Government and Heritage, Darragh O’Brien TD.

Many infrastructure projects throughout the State are dependent upon the transformation of water services, Minister O’Brien highlights. With plans to build over 300,000 new homes by the year 2030, the Minister outlines spending commitments which will transform the quality of water in Ireland:

“We have seen a very significant period of reform in the water sector in recent years, and we have also seen, through our National Development Plan, record investment in water services in the Republic.

“Our National Development Plan actually commits €6 billion between now and 2025. It is [Irish Water CEO] Niall Gleeson’s job to make sure that that is spent well, and we are getting the services and improvements we need. Importantly that capital is agreed, it is there on a multiannual basis and it ensures that we are able to plan projects into the future.”

Of that €6 billion, €4.5 billion is a commitment of exchequer funding for domestic water services in 2022. In the same period, Irish Water will spend close to €2 billion in operational and capital investment in water services.

Acknowledging that that the transformation has “been happening slowly,” but that it is “gathering pace”, the Minister points to the Programme for Government, which includes a commitment to retain Irish Water in public ownership, and to ensure that it is a “national, stand-alone utility, whilst ensuring that its sufficiently funded to fulfil its role”.

Minister O’Brien says that the goal of the Government is to ensure that Irish Water brings “greater coherence to how water services delivery is managed in an environmentally sustainable manner right across the country”.

Discussing the 2021 Water Sector Transformation Policy Paper, which “charts the course for completing the institutional reform programme by fully integrating water operations within the organisational structure of Irish Water,” the Minister also emphasises the goal of transformation of Irish Water into the single water utility as having the potential to create new jobs and training programmes.

The Minister acknowledged that the programme had been slowed down by the Covid-19 pandemic but added that he was “confident going forward that we will be able to agree on arrangements required and ensuring that any anxieties and concerns are allayed as we go through the process”. 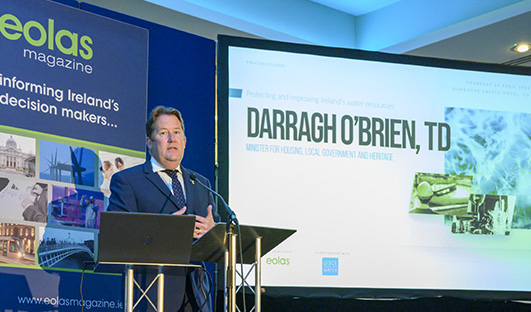 Highlighting a “real problem in relation in rural growth” of water infrastructure, the Minister asserts that there is “a big challenge as we continue to improve and enhance water services right across the country”. As a result, the Minister announced a new €50 million targeted fund with the aim of, “targeting wastewater collection and treatment needs in villages and settlements without access to a public water services network”.

“What I really want to see with this is that some of our rural towns and villages who have not been able to access the capital programme who are longer down the road for that to happen but will use this as a pilot scheme,” he explains.

“The schemes that I want to see brought forward are the ones that are ready to go, where the local authorities have done the work, where the land is acquired, where the permissions are there, and the designs are done. After this, we will assess the applications which come through in September 2022 and move very quickly to approving them so that the local authorities will then tender for that work.”

The Minister indicated his frustration at the slow progress of updating water services for local communities in Ireland: “We have had a situation where we have had untreated wastewater going straight into the Avoca River. We have a €134 million plant that has been started that is being built and that is happening across the country.”

Considering the challenges, including planning permission, which have hindered efforts to improve rural water infrastructure, the Minister outlines that he plans to publish a “consolidated planning bill in the autumn,” with the aim of “positively impacting upon infrastructure developments, whilst also respecting the right for the public to make observations”.

“Communities are asking me why there is a situation that wastewater plants in towns and villages have not been upgraded or not been replaced. The place for planning is not in the courts in my view. People can have recourse now where we have had cases go on further into Europe,” he says. 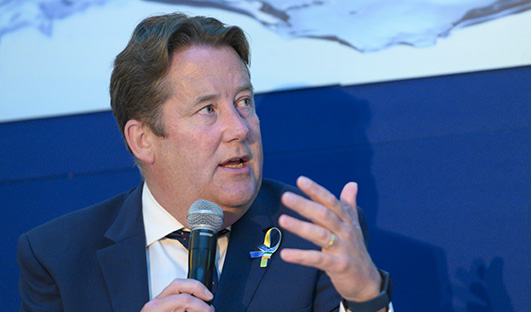 Meanwhile, states that his planned River Basin Management Plan, due to be published later in 2022, as the key framework to reversing the deterioration of water quality.

“The continued deterioration in the quality of our rivers and streams in Ireland is of real concern to us and we have to reverse that trend,” he insists.

Discussing the plan, the Minister provides an update on its progress: “Right now, we are reviewing over 1,400 submissions right across the 26 counties that were received during the public consultation.

“When that review happens, that will strengthen the plan and it will help us then to support and protect water. We are going to publish that later this year. What I want to see is a management plan, but it is going to be very action focused.

“It will require a lot more work for us to deliver but one of the concerns that I have is we are seeing a continued deterioration in our water, particularly in our inland water courses and in our rivers for many reasons.”

“We have got to start reversing that trend and seeing improvements in that. That will happen through the addition of the provisional infrastructure that I have just discussed but also in relation to change of practices that we need to ensure happens.”

Measures which he believes are essential to protecting Ireland’s water resources include reducing the loss of fertilisers and soil from farmland into inland water, reducing the physical impact on water caused by drainage activity, increasing the number of water barriers as well as investment from his department in urban and rural wastewater services.

Looking to the future, Minister O’Brien outlines that “we need to proceed with enhanced investment in our water services, which our multi-annual investment provides for €6 billion”.

The Minister adds that the main challenge to ensuring progress for Irish Water is consolidating trust between all stakeholders. Acknowledging this challenge, he states that the Government will “be there to support change and to ensure that any commitments which are required by government are met in that space”.

He further states that the Government will monitor the progress on a weekly basis.

“We have an environment subcommittee within cabinet where the commitments in the Programme for Government are tracked as to how we are moving,” he concludes.