Ireland’s minimum wage employees are more likely to be located in sectors hardest hit by the pandemic, an ESRI study has found.

The findings were part of a comparative analysis of minimum wage across Ireland, compared to other European countries where a minimum wage is operational. The EU has suggested a Minimum Wage Initiative, proposing a legal instrument to ensure that every worker in the European Union has a fair minimum wage by 2024.

A total of 21 of the 27 EU member states, as well as the UK, currently have a statutory minimum wage. Ireland is second behind Luxembourg in nominal terms, however, falls to seventh in rank when purchasing power standards are applied.

In the context of the pandemic, the research indicates that minimum wage increases in Ireland may only have a limited impact in trying to alleviate household poverty due to the spread of minimum wage workers across various household income types. 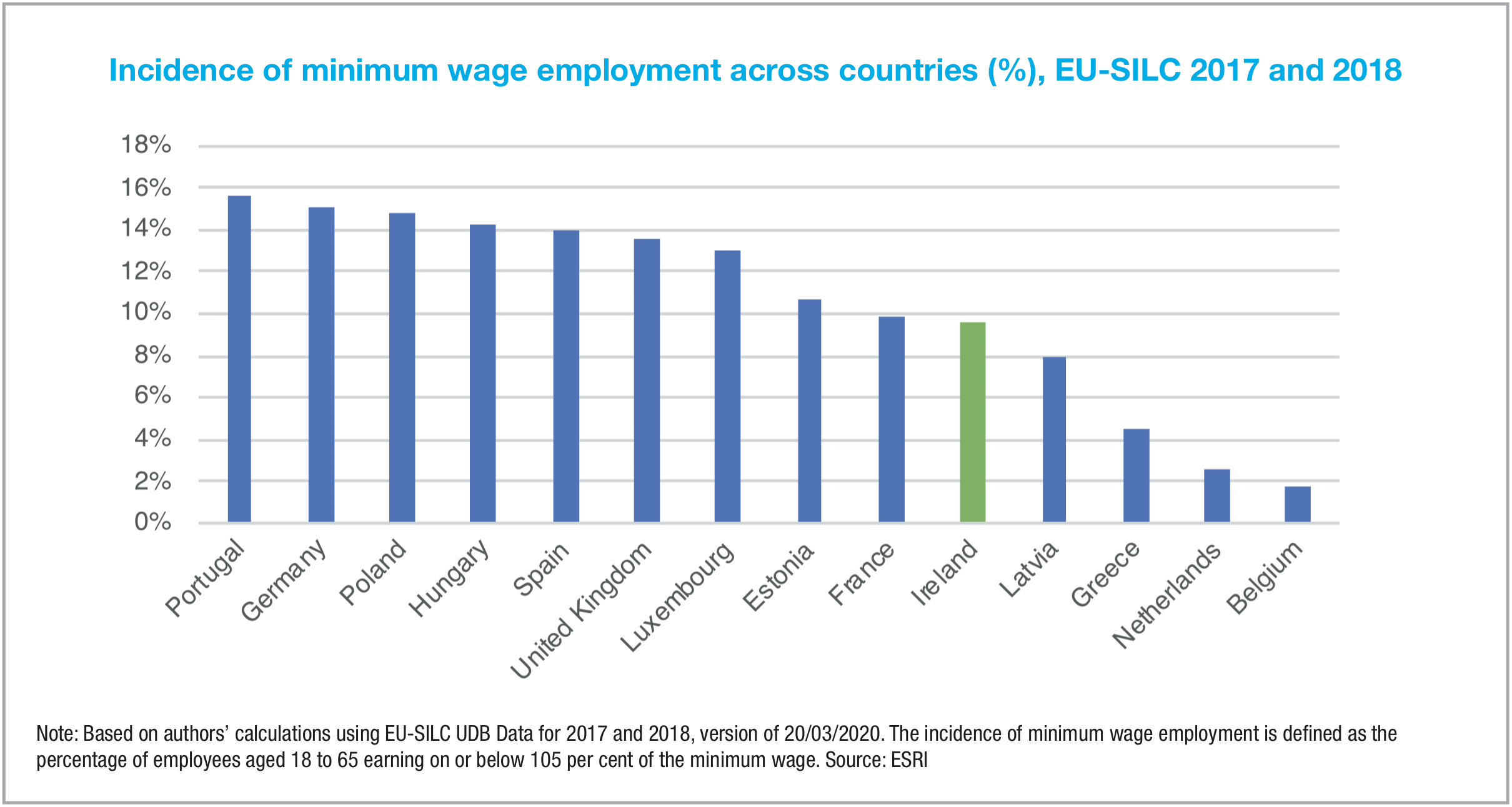 Data for the report was gathered in 2017 and 2018 and it found that Ireland had an almost 10 per cent rate of employees paid the minimum wage. This compares favourably with member states at the highest scale of minimum wage employment, including Portugal (15.6 per cent), Germany (15.1 per cent), Poland (14.8 per cent), Hungary (14.2 per cent) and Spain (14 per cent). The UK’s rate was 13.6 per cent. However, some countries have a much lower minimum wage incidence rate than Ireland such as Belgium (1.7 per cent), Netherlands (2.6 per cent) and Greece (4.5 per cent).

Like most EU member states, in Ireland, age is a strong predictor of minimum wage status. The ESRI research found that employees in Ireland that are aged above 29 years are between five to eight percentage points less likely to be on the minimum wage compared to younger employees.

However, minimum wage status is not isolated to younger people alone. In Ireland, 13 per cent of minimum age workers are aged 50 or over, a figure which compares to higher levels of over 25 per cent in the likes of Germany, Estonia, France, Hungary, Latvia, Portugal and the UK.

Interestingly, Ireland fares well when considering the difference in likelihood of minimum wage employment between genders. Both Ireland and the Netherlands are the only two EU countries not to register significant differences in the likelihood of minimum wage employment between genders. In other member states, women are between one and six percentage points more likely to be on the minimum wage than men, even when controlling for other factors. 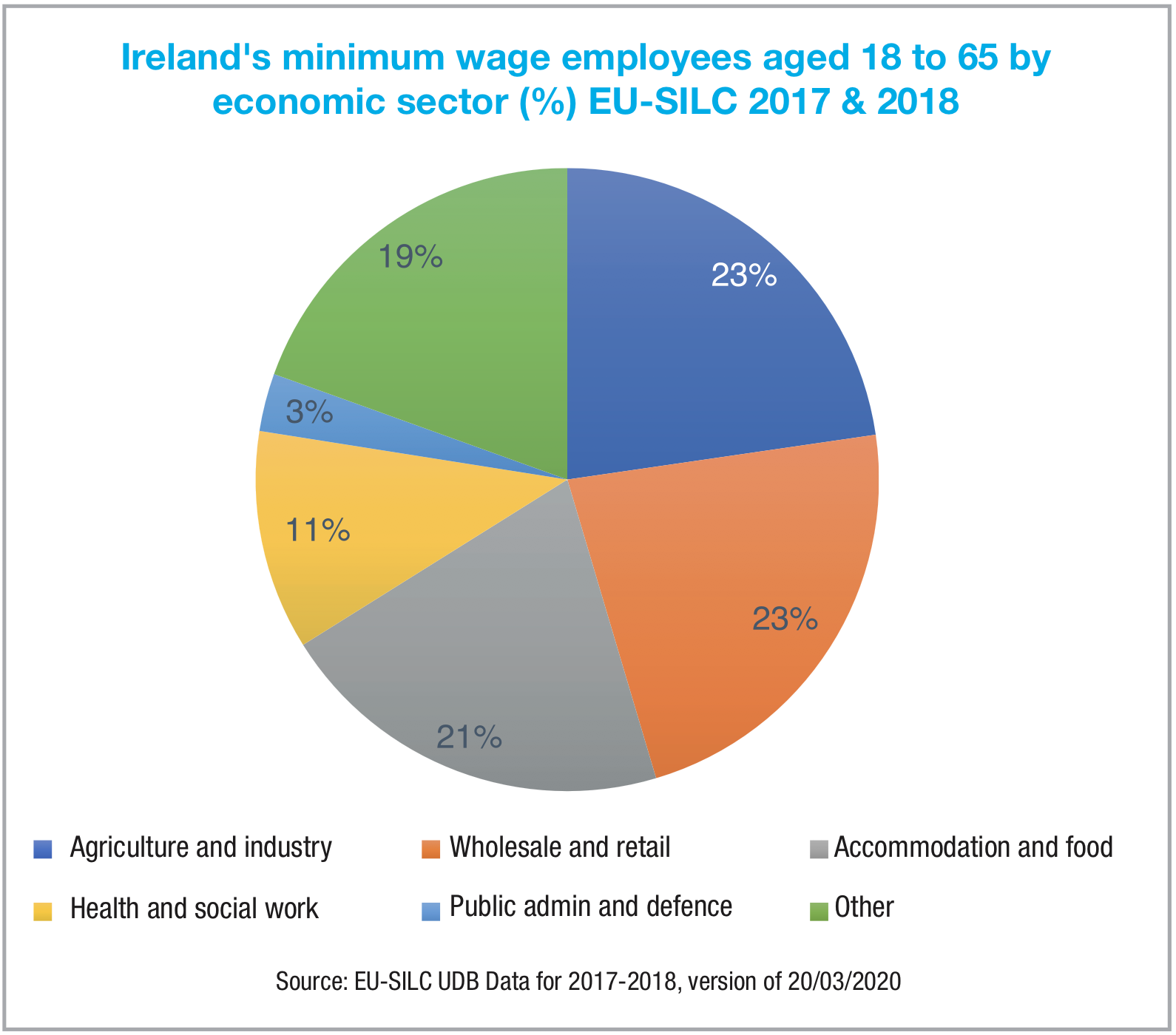 Another critical factor identified by the research is education. Employees with third-level education in Ireland are eight percentage points less likely to be on the minimum wage compared to those with a secondary or less education. Ireland has the highest-educated workforce among all countries studied and at 46 per cent, Ireland also has the highest percentage of highly educated minimum wage employees.

In terms of economic sectors, just under half (43 per cent) of all minimum wage employees in Ireland are located in the two sectors of wholesale and retail and accommodation and food. The ESRI research found that Ireland’s concentration of minimum wage employees in these sectors was the highest of all countries sampled. The concentration in these two sectors in Ireland is not consistent with analysis of comparative data on all employees, where countries including Greece, Spain and Portugal have a higher percentage of employees within these two sectors.

The research suggests that the “disproportionate number” of minimum wage employees in these two sectors when compared to other countries has implications when considering the public health measures in response to the pandemic, specifically business closures.