Ciara Phelan is a political correspondent with Irish Daily Mirror and host of The Glass Ceiling podcast. A graduate of the University of Limerick, she previously worked for the Irish Examiner, RTÉ and Newstalk.

It’s a strange one because I didn’t come from a family who religiously bought newspapers every day, there would be the odd one bought at the weekend, sometimes. I didn’t know anyone or have a relative working in the industry.

I was really good at English in school and loved writing and I would literally talk for Ireland and find it easy to chat to people so I tried to combine those and thought maybe journalism was a career I should pursue.

However, for once I actually listened to some people around me and they were encouraging me not to seek a career in journalism because it was hard to get your foot in the door or there was this belief that jobs in the industry are scarce.

I left a degree in English and history after a month not really knowing what I wanted to do but reapplied to the CAO the following year, listened to my gut and ended up studying journalism and new media at the University of Limerick.

I sacrificed a few things like a J1 while in college and instead dedicated my summers to trying some freelancing at national titles as I found it hard to get experience while at university.

I also did an internship at my local radio station and I think this really helped me step into the industry.

The freelancing gave me an advantage when I left college as I had that little bit more experience than others who were also graduating with journalism degrees.

On the day I sat my final exam I drove to Cork to interview for a job as a digital journalist with the Irish Examiner. I spent a while working there before moving to RTÉ, then Newstalk and I have been with the Irish Mirror for just over two years now and was promoted to political Correspondent in July 2020.

I think the pandemic has really shone a light on why journalism matters. Social media can be fantastic but it is a dangerous tool to spread misinformation and a lot of opinionated people online believe they are actually a journalist when in fact they do not offer balanced reporting.

Don’t get me wrong, columns in newspapers are for opinion pieces and we need them. But a lot of people online who have never trained as a journalist are now tweeting misinformation and write posts that they claim are factual which is not the case in so many scenarios. Others digest it without fact-checking it themselves and that is worrying.

The news cycle is 24/7, stories are updated on the hour and journalists now need to be equipped with video skills and have a presence on social media. Due to live streaming of doorsteps, there’s pressure to break the story first online and then try to find an alternative angle for the newspaper the next day.

But it always boils back down to the skill itself, building contacts, good sources, exclusive lines, balanced reporting, asking the tough questions and how a story will impact readers.

What are the challenges of combining print journalism with podcasting?

I have yet to come across any really. I have recently launched my own podcast on the Irish Mirror. It’s called The Glass Ceiling and I chat to female politicians about their lives and their careers. It’s a non-Covid zone as much as possible and the episodes aim to inform listeners about the person, rather than the politician. Many guests have spoken about major events in their lives such as the loss of a loved one but also about the challenges and triumphs they have faced as a female politician. 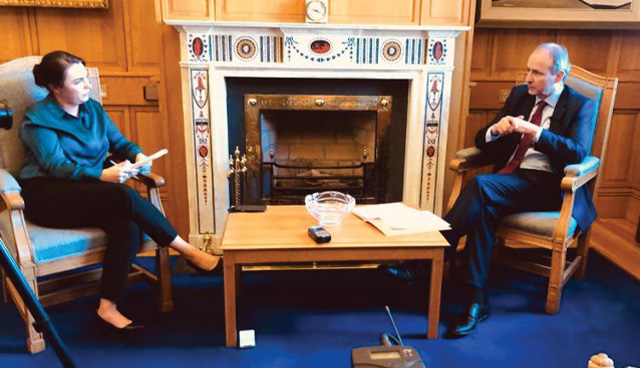 “A lot of people online who have never trained as a journalist are now tweeting misinformation and write posts that they claim are factual which is not the case in so many scenarios. Others digest it without fact-checking it themselves and that is worrying.”

I have a write up about the chat in the newspaper on the same day. Maybe one challenge is that the tone of the chat may not come across the same way in print. But I think it’s a great way for the public to learn a little bit more about who our elected representatives are.

Oooh, that’s a tough one. I love a dark horse and someone who has been knocked off a saddle but got back up again.

I admire people for different reasons and I think given the year we’ve put in working throughout this pandemic, it’s hard not to admire anyone working in my own newspaper, the Irish Mirror and in other national titles. I think it is incredible that we’re producing newspapers from our bedrooms and kitchen tables. The Irish Mirror website attracts a huge amount of readers, over one million people most days.

If I have to pick one person though, I really enjoy Sarah McInerney. I think she’s a fantastic interviewer.

I probably can’t answer this question without mentioning the exclusive interview I did with Taoiseach Micheál Martin a few weeks back when he revealed extending the lockdown with strict measures for another nine weeks. The reaction was insane and the story ran for days.

One of my favourite stories to cover to date was former US President Donald Trump’s visit to Ireland in 2019.

I’ve written plenty of interviews where I was really moved. One that sticks in my mind was an interview I did with a mother who had been brutally beaten and raped which subsequently left her in a wheelchair. It was her first time speaking out after the attack and she trusted me to tell her story.

I also covered the Mr Moonlight case in court and I’ll never forget the look on the faces of Bobby Ryan’s family when the guilty verdict was given.

Those stories that have a significant impact on people stay with you for a long time.

I love to hop into the car and go for a drive somewhere and get out for a walk if the weather is good.

I also watch a lot of reality TV such as the Kardashians, the Real Housewives, all of those types of shows. It’s a great way to switch off at night or on the weekends when I need a break from the political madness.

I would love nothing more now though to get back out on the dancefloor in a bar with my friends. Someday soon, hopefully!