Fingal County Council’s Climate Change Action Plan, which was published last September, sets out how the Council will improve energy efficiency and reduce greenhouse gas emissions in its own buildings and operations, while making Fingal a more climate resilient region, with engaged and informed citizens.

Climate change is one of the most pressing challenges currently facing central and local government and Fingal County Council has put it at the forefront of its agenda.

Ethna Felten, who is Fingal County Council’s recently appointed Director of Environment and Climate Action, says the Council wants to be among those leading the way in tackling climate change. “Fingal County Council is committed to continued climate action, across the key areas of adaptation, mitigation and public engagement. The Council will continue to work with key stakeholders to influence and support carbon reduction initiatives across the county.”

Fingal’s plan has been developed in collaboration with the other three Dublin local authorities and in partnership with the Dublin energy agency Codema and Dublin’s Climate Action Regional Office (CARO). All have worked together to deliver a response to the impact that climate change is having, and will continue to have, on the Dublin region and its citizens.

While each plan is unique to its functional area, the group are united in their approach to climate change adaptation and mitigation and in their commitment to lead by example in tackling this global issue.

Fingal’s Climate Change Action Plan contains 133 actions that are on-going or planned within the Council, covering the five key action areas of Energy and Buildings, Transport, Flood Resilience, Nature-Based Solutions and Resource Management. Collectively, they address the four targets of the Action Plan which are:

To achieve these targets, the Plan sets out the current and future climate change impacts and greenhouse gas emission levels in Fingal through the development of adaptation and mitigation baselines. It also examines the future impacts that climate change may have on the region and then sets out a first iteration of actions that will be used to reduce the source and effects of these impacts.

In drawing up their Plan, Fingal held an extensive six-week public consultation process in February and March of last year. Almost 170 people attended four events across the county and over 120 submissions were received.

The Plan was adopted by councillors in May and officially launched by the Mayor of Fingal, Cllr Eoghan O’Brien, in September where he outlined the Council’s approach.

“Fingal County Council will set out to actively inform and engage the public, through a range of innovative programmes and partnerships and, where possible, facilitate bottom-up, community-led solutions.”

The Council has already appointed a Climate Action Officer and will shortly add a Climate Awareness Officer to their team as they look to educate staff, citizens and businesses on the threat to Fingal from climate change and the steps those groups need to take in order to mitigate the consequences.

The adaptation baseline prepared as part of the Plan has identified that the effects of climate change are already impacting the Fingal area at a significant rate and are very likely to increase in their frequency and intensity. Dublin Bay’s sea level appears to be rising faster than initially forecasted and has risen by twice the global average in the last 20 years. The number of days with heavy rainfall has also increased, and the amount of extreme flooding events in the county has risen in the last 10 years.

Fingal has also experienced extreme temperatures, as witnessed recently in 2018, with Met Éireann issuing its first ever Status Red warning for snow in February, followed by one of the hottest summers on record during June and July. All these extreme weather events clearly highlight the need to reduce the impacts that climate change is having on the environment, the economy and the citizens of Fingal. 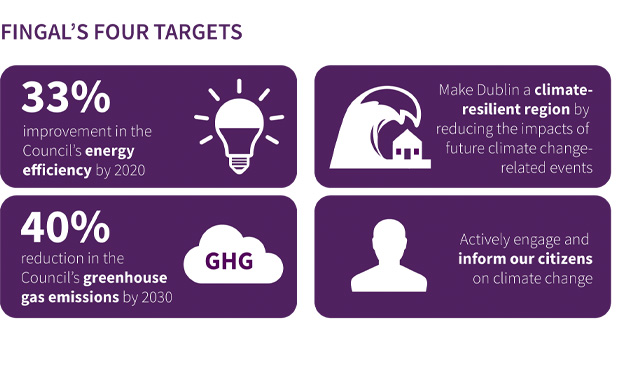 The mitigation baseline calculated the greenhouse gas emissions for the Council’s own activities and also for the entirety of Fingal County including a breakdown of the residential, transport and commercial sectors. It found that Fingal County Council produced 12,620 tonnes of CO₂ in 2017 and has reduced its emissions by 19 per cent in the last 10 years. In addition, the Council has improved its energy efficiency by 30.3 per cent and is currently on track to meet its 33 per cent energy efficiency target by 2020.

“Over the past two years we have piloted or instigated a number of initiatives such as the use of LED lights in our public lighting system, energy saving lighting in our offices, the provision of electric car charging points in our car parks and the purchase of electric vehicles for our fleet,” says Felten. “By doing this, we are showing others in our community the type of things they need to start doing.”

Fingal have also identified the need to ensure their commitment to reducing the causes and impacts of climate change are integrated into their own decision-making processes for planning, policies and operational processes. This will be achieved by providing staff with the training and tools required to make informed choices.

The actions in the Climate Action Plan are designed to close the gap between the current baselines and the stated targets and will be regularly updated, and added to, on the Dublin Climate Change platform (www.dublinclimatechange.ie). These actions have many co-benefits, such as improved health through cleaner air and active travel, a better environment through habitat protection, and a stronger economy from new markets and job opportunities.

However, given that the Council’s buildings, operations and social housing sectors account for less than 2 per cent of the total emissions in Fingal, it highlights the need to tackle the remaining 98 per cent of emissions produced county-wide. In recognising this challenge, Fingal County Council will work with key stakeholders to influence and support carbon reduction initiatives across the county’s transport, commercial and residential.

The four Dublin councils are all signatories to the EU Covenant of Mayors for Climate and Energy initiative, which is a voluntary commitment by members to develop and implement Sustainable Energy and Climate Action Plans (SECAPs) and reduce their regions’ greenhouse gases (GHGs) by 40 per cent by 2030. Fingal will apply this target to its own operations but will also influence a reduction in GHGs county-wide.

“There is a lot of work to be done. A major part of our role will be to educate the public and persuade them to change their attitudes and their behaviours. It won’t happen overnight, but we are in this for the long haul,” says Felten.

The Fingal Climate Action Plan can be viewed at https://www.fingal.ie/climate-change-action-plan-2019-2024