Following General Election 2020, two valid nominations were received by Peter Finnegan, Clerk of Dáil Éireann, and deemed to be candidates for the position of Leas-Cheann Comhairle. In June 2016, an amendment to Dáil Éireann Standing Order 11 determined that candidates for the position be selected by secret ballot (using PR-STV) before being formally elected through an open vote in the Dáil.

Outlining the rationale which informed her decision to contest the 2020 election, Connolly indicates that she felt compelled to challenge the only other nominee, Fergus O’Dowd, a male TD from a government party.

“I went for it because I felt, as a woman, I couldn’t continue to make the critique that not enough women were putting themselves forward, that we need gender equality and then not do something about it. The rationale was not only to have a female candidate, but to have an Opposition candidate also,” she says.

In the event, Connolly narrowly defeated Fine Gael’s O’Dowd and succeeded Fianna Fáil’s Pat ‘The Cope’ Gallagher as Leas-Cheann Comhairle. With a total valid poll of 151, Connolly secured 77 votes to O’Dowd’s 74 votes on the first count.

“I was overwhelmed. We went forward believing that we hadn’t a chance. We knew that the Government had the numbers,” she remarks, adding: “I thought that if I could galvanise the Opposition, I would be proud. We talked to the Opposition parties and the support we received was overwhelming. Going into that election, I felt that we had already achieved our objective and illustrated that it was possible. When we then won, it was a shock.”

After Connolly made her official declarations and took the Chair, An Ceann Comhairle congratulated her on behalf of the members on what was an historic achievement. “It is a great occasion for her, her family and supporters and for all of us here in Dáil Éireann,” Seán Ó Fearghaíl TD stated.

In the aftermath, Connolly needed some time to digest her victory and time off in August helped her “come to terms with what I and the small group around me had achieved and the significance of it”. The recognition and sense of pride among the people of Galway, especially Connolly’s late aunt, Mary Carpenter née Connolly, brought home a sense of achievement.

“It’s a privilege. As the first female Leas-Cheann Comhairle, I think the symbolism is very important for women, particularly for young women. To go forward, not to play a game or be part of a boys’ club, or a women’s club for that matter, but to stand up and be counted and to show what’s possible,” she asserts.

Referencing her working relationship with the Ceann Comhairle, Connolly articulates her respect for Ó Fearghaíl. “He has done a very good job since assuming the role of Ceann Comhairle in 2016. When he went forward again, I had no reluctance in supporting him. I think he’s fair, just and exceptionally hardworking,” she notes.

The role of Leas-Cheann Comhairle

The Leas-Cheann Comhairle undertakes the duties and exercises the authority of the Ceann Comhairle as outlined by the Dáil Standing Orders in the latter’s “unavoidable absence”. This includes:

Therefore, on behalf of the House, the Leas-Cheann Comhairle is tasked with protecting the right of each Member, ensuring that business is pursued in a manner befitting its status as a core component of the legislature and a representative assembly to which government is constitutionally accountable. In the Chair, the Leas-Cheann Comhairle acts as an impartial presiding member.

While acknowledging that the role is well remunerated, Connolly maintains that it comes with its own set of challenges. “For instance, the Dáil will begin at 14:00 today and go on until 00:30 tonight. The Leas-Cheann Comhairle is constantly in the public eye. That’s difficult,” she emphasises.

Likewise, the new Leas-Cheann Comhairle must become more familiar with the intricacies of her role and the various constitutional requirements for occasions when the Ceann Comhairle is absent. “For example, if Deputy Ó Fearghaíl is not available as an ex officio member of the Presidential Commission, I will assume that role in his place,” Connolly adds.

As Leas-Cheann Comhairle, the TD for Galway West has also retained her role as an independent TD. “I table questions and work as I always did, though it’s a little bit more difficult to manage getting out of the Chair and then going back into fighting mode. There’s a mental adjustment required,” she explains.

Crucially, while in the Chair, the Leas-Cheann Comhairle must remain impartial. “It’s important to have fairness in procedure. I have strong opinions but I’m also able to set them aside when I assume the role of Leas-Cheann Comhairle. It’s a role that must be exercised in a fair and a just manner. I don’t have any difficulty with that.

“There is a duty on us as parliamentarians to make democracy work as best we can. To be Leas-Cheann Comhairle is a privilege. In that role you’re there as chair, keeping order while ensuring respect for each TD and providing them with an opportunity to have their say. I might disagree with their opinions but that’s irrelevant to the Leas-Cheann Comhairle, whose role it is to allow them to speak within the time allotted. Which is a challenge,” she quips.

Connolly is also a passionate Gaeilgeoir and recognises the challenge of promoting the Irish language in the Dáil and beyond.

While the Leas-Cheann Comhairle initially had cúpla focal from school, she committed herself to developing her fluency in the language during her time as Mayor of Galway. 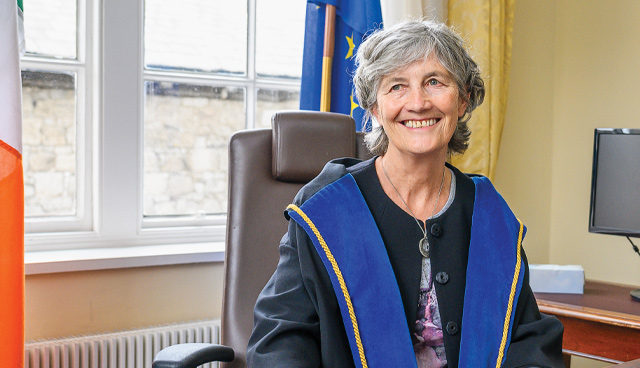 Now, the TD for Galway West seeks to use Irish each day in the Dáil.

One suggestion she makes to promote the use of the Irish language in the Dáil is that An Taoiseach should receive a question as Gaeilge each week.

Criticising the prevalence of spin in Irish politics, the Leas-Cheann Comhairle asserts that politicians must aspire to honesty and integrity. “I think we all make mistakes and I have no problem with mistakes. I make mistakes. But we have to acknowledge and learn from them. No politician can be perfect, and I think we need to convey that to the public.

“Sometimes I have a sense of frustration, as a TD, that we’re not talking enough about substantive matters in relation to health, housing or climate change for instance. We should be working to recognise the problems and identify solutions. I’m allergic to spin. I have no time for it,” she remarks.

Meanwhile, paying tribute to her staff, without whom “I couldn’t do it otherwise”, Connolly is confident that she will rise to the challenge of chairing the Dáil in a fair and impartial manner, while keeping deputies within their time. “I’m optimistic by nature but I’m also pragmatic. I remind myself every day that this is a privilege and seek to undertake the role to the best of my ability,” she concludes.

A native of Galway city (originally from Shantalla before moving to the Claddagh), Leas-Cheann Comhairle Catherine Connolly TD first entered politics in 1999 when she was elected to Galway City Council for the Labour Party. In 2004, she became Mayor of Galway before leaving Labour in 2006. After contesting the 2007 and 2011 general elections, and serving a total of 17 years as a councillor, Connolly was successfully elected to the Dáil as an independent TD for Galway West in 2016, subsequently serving on the Public Accounts Committee which she regards as “the greatest education I ever had”. Retaining her seat in February 2020, she was then elected as Leas-Cheann Comhairle in July 2020.

Prior to her entry into politics, Connolly worked as a clinical psychologist with the Western Health Board in Ballinasloe, Galway city and in Connemara before studying law and becoming a practicing barrister, mostly in family law.