Chief Executive of the Courts Service, Angela Denning, discusses how the recognised need for modernisation has been accelerated in response to the pandemic.

The outbreak of the pandemic presented major challenges for the public-facing and traditional nature of the Courts Service, explains Denning, who rejoined in 2019 to lead on the 10-year modernisation programme.

The significance of any changes to the traditional model delivery can be recognised in appreciating the reach of the Courts Service. Operating with almost 1,100 staff, who support 176 judges, the Courts Service look after the affairs of more than 2,700 wards of court, the most vulnerable citizens in society. Additionally, in 2019 the Courts Service processed approximately 678,000 civil and criminal matters and dealt with some 17,000 applications for probate.

This reach was recognised by the Courts Service who, prior to the pandemic, initiated a modernisation programme on the back of a capability review carried out by the Department of Public Expenditure and Reform (DPER), as well as contributions to the Oireachtas Committee on Justice and Equality from members of the Judiciary, Law Society, Bar Council, members of the public and advocacy groups, which all demanded reform of the courts.

Explaining the need for reform, Denning says: “We hadn’t kept pace with digital change and couldn’t provide the digital solutions and services being demanded by users and the ultimate goal of our modernisation programme is to streamline our services to make them quicker, easier for users and more cost efficient and effective.

“The traditional model of the courts meant that it had time consuming processes that were cumbersome, technical and inefficient for users. In that respect we were genuinely surprised when Covid-19 hit how innovative our staff, the Judiciary and participants right across the system were in delivering necessary change and at such pace.”

Setting out the primary focus of ensuring the courts stayed open and the significance of this, Denning states: “There is no point in having a constitution if you can’t access the courts in order to uphold your rights under that constitution.”

The major challenge was the pace at which decisions had to be made to keep the doors open and ensure people were safe, explains Denning, who quickly ensured that any staff could work from home did so to ensure additional space for those required to be on site.

“We took a whole-of-organisation approach to that mobilisation, splitting up teams and introducing Saturday working in some Dublin offices. Additionally, the Courts Service organised drop boxes where possible to reduce the number of people entering court buildings and initiating appointment-only access to court offices.”

Process adaptation was required under new restrictions. Denning explains that following an assessment of the Courts Service’s whole estate, in many cases, existing court houses weren’t big enough to stage jury trials and the requirement for innovation was realised.

The Chief Executive explains that not all of the innovation identified has been ground-breaking. Greater collaboration between the Judiciary and the Courts Service has facilitated regular meetings on progress around the likes of remote courts and alternative venues. Similarly, the establishment of a Covid-19 response team saw a shift and improvement of communications.

“We moved to Twitter immediately as a means to communicate with our users, recognising it as the best method to deliver just-in-time information. We also adopted a more structured approach to communications, recognising the need for all of our stakeholders to receive messaging in a consistent manner.”

Denning reached out to external stakeholders and established a weekly meeting whereby she could brief them in advance and that information could then be dispersed to their membership through their own established mechanisms of communication.

We hadn’t kept pace with digital change and couldn’t provide the digital solutions and services being demanded by users.

Denning adds: “We also built on our relationship with the Department of Justice. As soon as the new Government was formed, we had legislation in place to assist us, for videolinks to prisons, for example. We also worked closely with the Department on the ‘Still Here’ campaign, a whole-of-Government campaign where different organisations worked to let victims of domestic violence know that facilities were still available to them if needed.”

Highlighting how coordination and collaboration has helped accelerate modernisation and the major changes that have been brought about, Denning says that the primary challenge was managing footfall. “The days where large numbers gathered in a courthouse in the morning and working through the list are not suitable for a pandemic,” she states, explaining that the Courts Service have now introduced staggered lists and attendances at courthouses.

One of the most innovative changes delivered at pace has been the establishment of videolinks to prisons, for courts. Hailing that the number of videolinks to prisons have more than doubled in response to Covid compared to 2019, Denning adds: “From the outset the serious implications of, Covid-19 getting in to the prison system were recognised. We spoke to the Judiciary and as a result we’ve had over 6,000 videolinks. That’s not only increased safety for all involved but brought about greater efficiencies in that prison officers usually needed to transport prisoners to court are now freed up to deal with the isolation space when new prisoners are brought in.”

Technology has also been an enabler of change, says Denning, pointing to the Courts Services use of Sharefile, software that had to be introduced to allow practitioners to upload documents to be viewed by Judges online, where previously they were transported in hard copy. Another enabling technology for the Courts Service is the use of iAuditor, an app being introduced to allow for checks on protective measure supports, such as hand sanitiser availability and accurate signage, accounted for in real time and therefore dealt with more efficiently than the paper-based legacy system.

However, Denning is clear that the most significant change has been the introduction of remote courts, which she says she could not have envisaged that, when she took the job of CEO just over one year ago, they would be operational within the year. “Our IT estate had suffered from underinvestment over the years but in very quick time we were able to repurpose existing technology at no additional cost and to date we’ve had over 1,000 remote court sessions, which have been recognised as a significant way forward by all involved.”

Outlining the scale of modernisation that has occurred in recent months, Denning says: “I think we’ve come a couple of hundred years in a few months. We have learnt a lot and have much to take with us into the future.”

In hoping to continue the modernisation at pace and build on current momentum, Denning and the Probate team have also recently supported Revenue’s move of the tax aspects of probate online and the new eLicensing system, which can facilitate fee waivers and central processing of refunds, in support of the Governments change in policy on liquor licensing. Additionally, The Department of Justice have introduced new legislation to enable increased use of remote courts and videolinks including facilitating a switch from sworn affidavits to sworn statements of truth for online use.

Looking to the future, Denning says that the Courts Service vision is to combine the lessons learnt from the pandemic response with ambitions for further modernisation. “We’ve learned an awful lot in recent months about our culture, the dedication of our staff, motivating factors for staff and court users and about the levels of change we can deliver when working cohesively.

“We want to build on that culture shift that we’ve seen across the professions and continue to be open to new ideas and learning,” concludes Denning.

For more information on the Courts Service visit www.courts.ie 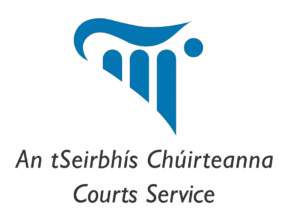