While General Election 2020 was anticipated as a historic opportunity to rebalance the gender inequality within the Dáil, a 1 per cent rise in female representation once all votes were tallied has left campaigners disappointed.

For the first time in Dáil history, every constituency featured at least one female candidate on its ballot paper, a fact which raised expectations for the number of female candidates that would be returned. Following the introduction of a 30 per cent quota per party for female candidates for the 2016 election, campaigners had hoped that 2020 could be a boon year, but the election has instead been referred to as a “missed opportunity”.

2016 set the records for both overall number of female representatives in the Dáil, with 35, and proportion of representatives being female, 22.1 per cent. The 2020 general election improved these figures, but only slightly, returning 36 female TDs, 22.5 per cent of the 33rd Dáil. Speaking as results began to come through in the immediate aftermath of the election, the CEO of Women for Election, Ciairín de Buis said that the organization was “disappointed that the number of women TDs has not risen significantly since the last election, but this was somewhat inevitable given that the larger parties did not run a balanced ticket”.

The three largest parties in the State all rolled out candidate slates with female candidates in the 30s percentage wise; Fine Gael, who introduced the 30 per cent quota for candidates, ran the minimum 30 per cent, while Fianna Fáil  ran 31 per cent. Sinn Féin, the only main party led by a woman, ran 33 per cent women, with 14 of its 42 candidates across Ireland being female.

The Social Democrats, themselves led by two women, was the only party to run a slate of candidates that was more than half female, with 11 of 20 candidates, or 55 per cent being female. The only other party to have achieved the goal set by Women for Election, that 40 per cent of candidates run be women, was the Green Party, whose slate was made up of 41 per cent women. Solidarity-People Before Profit also ranked ahead of the larger parties, with its ticket being 38 per cent women.

According to the National Women’s Council of Ireland, another significant issue in the field of female representation is that of the rural/urban divide, with women making up just 22 per cent of candidates in rural areas, compared with 44 per cent in urban areas. Interestingly, success rates for candidates within the traditional big two parties seemed to vary wildly based on gender, with Fianna Fáil and Fine Gael male candidates having success rates of 55 per cent and 51 per cent respectively while their female colleagues had respective success rates of 19 per cent and 24 per cent.

In terms of proportion of females who did win election, the Social Democrats also led the way, with four of their six TDs, 66 per cent, being women. Sinn Féin had the most overall female TDs with 13, also ranking them second in terms of proportion, the 13 making up 35 per cent of the party’s 37 seats won.

The 2016 general election saw a significant jump in terms of women’s representation at Leinster House, with the overall number of women TDs rising while the number of overall TDs was reduced, allowing the proportion of women TDs to breach the 20 per cent mark for the first time since the foundation of the State. The final figure was 35 female TDs out of a total of 158, 22.1 per cent. The 2020 figures mark a slight increase, the smallest possible in overall figures, and will come as a disappointment to those who had hoped to continue the progress of 2016. 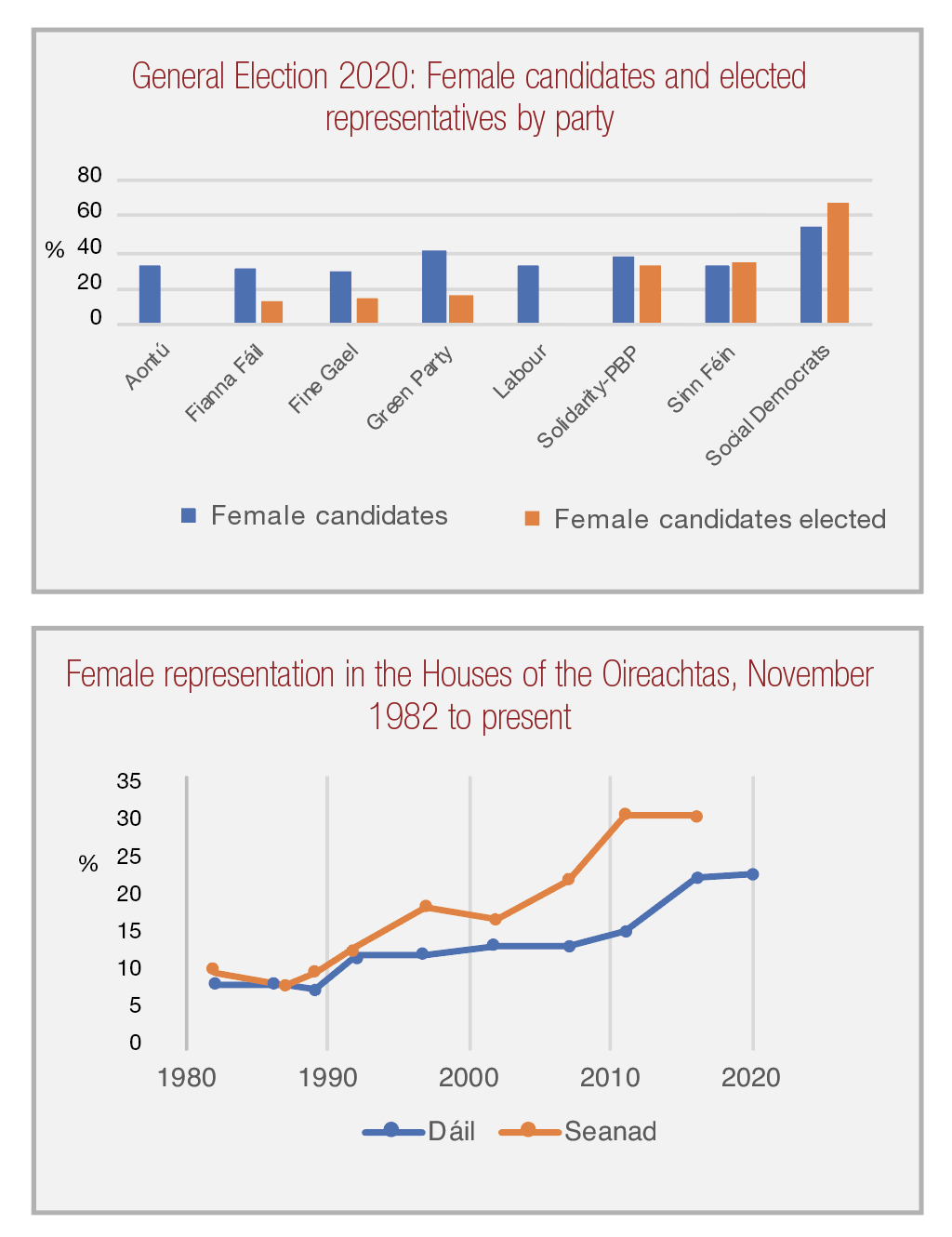 Female representation in the Seanad has long outpaced that of the Dáil. With female participation reaching 10 per cent in the upper house of the Oireachtas for the first time in 1977; Dáil figures did not reach double figures in terms of percentage until they hit 12 per cent after the 1992 general election.

Representation in the Seanad sat at 30 per cent, its highest ever level, for most of the 2010s, the 2011 and 2016 elections having returned 18 female Senators out of 60 each-time. As things currently stand after the 2020 Seanad election, there are 15 female Senators among  the 49 Senators elected. The remaining 11 seats of the Seanad will be filled by the Taoiseach once a permanent government is formed and while it is impossible to predict who will be appointed to those seats, it is not unreasonable to assume that at least three females will be among their numbers. More than three would see the Seanad continue its upward progression in terms of representation and continue to outpace the Dáil on this front.