Odrán Waldron speaks with Martin Glavin and Edward Jones of NUI Galway to discuss the university’s partnership with Valeo, the progress of their research into autonomous vehicle technology and the public’s perception of autonomous vehicles.

The west of Ireland has quietly been pioneering autonomous vehicle technology for almost 20 years; a Research and Development partnership between researchers at NUI Galway working with Lero, the Irish Software Research Centre, and Valeo, the global automotive supplier headquartered in Paris with a large presence in Tuam, has sought to cement that reputation.

Jones describes how the university’s relationship with Valeo goes back to before the global supplier acquired its Tuam campus, and the company situated there was Connaught Electronics Ltd. “The relationship has developed over time and we’ve been working in different generations of the technology,” he says. “We started with, by modern standards, relatively straightforward technology like reverse cameras and over the years we’ve been going into more sophisticated areas like computer vision and machine learning.”

“When we started this research, nobody was talking about autonomous cars,” says Glavin. He remembers “small, speculative” projects, including a call out for cameras to be mounted on cars in the early 2000s, being developed in Tuam. “They never really expected the market penetration to be as substantial as it became,” he claims. Demand projections of 20 to 30 per cent of drivers were left behind as it was realised that the proportion of drivers open to such technology “was nearer 90 per cent”.

“The market kind of appeared from nowhere in a short couple of years,” he reflects. Glavin, Jones and their colleagues then began working on processing the streams of information coming from these sensors and cameras with computer systems and algorithms so that by analysing the information, they could make the cars “increasingly autonomous”.

On the subject of just how autonomous cars are in 2019, Jones says that while we are still “quite some way” from fully autonomous vehicles, cars are already operating independently in some limited circumstances. “Over time, the cars will become much more capable of driving autonomously in more complex scenarios,” he explains.

Jones explains that levels of vehicular autonomy are often described on a scale of one to five, one being 100 per cent manual, five being 100 per cent self-driving. At the moment, he says that level two vehicles, “where drivers still have to pay attention”, are common and that the research done by NUI Galway and Valeo, funded by Science Foundation Ireland (SFI) and Valeo, is focused on higher levels of automation. At level three, Jones says, “you have an interplay between driver and vehicle”. “The car will be able to operate autonomously in limited circumstances. However, in this case, the driver doesn’t actually have to have their attention on the task and that’s a significant difference.”

It is at this level that Glavin thinks public trust in autonomous vehicles will come into practice. “Nobody wants to be sitting in traffic, moving a car length at a time, so that’s the kind of situation where you might be happy to hand over some autonomy,” he speculates. It is in the willing hand over of certain menial situations such as traffic jams or driving on motorways to the car’s intelligence system where trust will be built between human and machine and where the cars will pave the way to “eventually becoming de facto autonomous”.

Both Glavin and Jones acknowledge that the public perception of the autonomous vehicle is one that is 100 per cent self-controlled, a misconception driven by “over promising” in the marketing campaigns of competing car companies. They concede that the older the demographic, the less trust they have in such a concept. “We need to build a relationship with this technology and understand it,” Glavin says, pointing to research that says that those aged 19 to 34, digital natives for the most part, are much more likely to understand that the vehicles aren’t entirely self-governed and to place trust in them.

A graphic spread across social media in late 2018 that showed what choices an autonomous vehicle would make if it were presented with an unavoidable decision of hitting people and animals certainly did not help the public’s view of the vehicles, but Jones stresses that the NUI Galway and Valeo research is focused on perception of the environment, specifically driving at night and in bad weather, “rather than later in the chain, when decisions are made”. 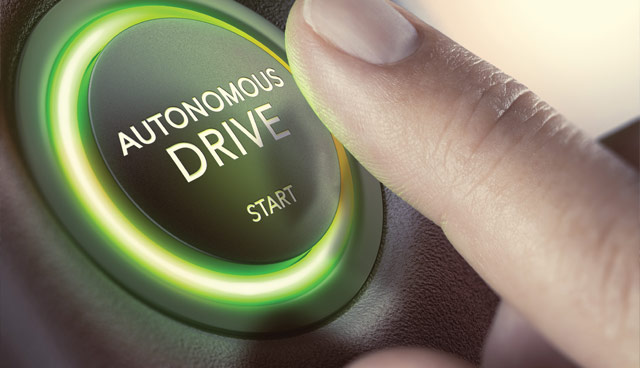 “Nobody wants to be sitting in traffic, moving a car length at a time, so that’s the kind of situation where you might be happy to hand over some kind of autonomy.”

Glavin says that “in many ways, our work is trying to remove the need to make that choice in the first place”. He says that if cameras, radars and sensors can be improved to the point that danger can be sensed fractions of a second earlier, then brakes can be applied quicker and danger hopefully averted.

The work itself is done with a combination of sensors and computers, with the Lero researchers’ primary expertise being in signal processing. Cameras, radars and other sensors attached to vehicles collect information and it is the job of those at NUI Galway to develop software and algorithms capable of extracting useful information from the streams of data collected.

Explaining the process, Jones says: “Autonomous vehicles are equipped with lots of different sensors, so what’s normally done is the output from each of these is analysed, fused using an algorithm and ultimately a decision is taken.” For example, in dense fog a camera mounted on a car might not see an object in the distance, but a radar could sense any such object. A simple fusion algorithm could be confused by one source of information picking up the object and the other not doing so, but a better-equipped car would have no problem with such dissonance.

“Part of the work we’re doing here is figuring out what are the right sources of information to listen to,” Jones says, with particular interest in driving during the night and in adverse weather conditions. Such requirements and research interests make Ireland’s stormy west coast a perfect venue for testing.

With ample testing ground, a team of 30 engineers from NUI Galway and Valeo including a number of new PhD positions specifically created by the partnership, Ireland’s west coast could well be driving us toward the future of automotive travel.