The European standard on electronic invoicing in public procurement (eInvoicing) is a major step forward in the digitisation process of public procurement within the EU, writes David Blanchard, Deputy Head of Unit for Innovative and E-procurement, DG Grow.

The European Committee for Standardisation (CEN) designed it at the request of the European Commission, which officially published it in October 2017. The standard allows the digitisation and automation of a critical phase in the implementation of public contracts, which is of huge benefit for businesses.

Since 2016, the procurement lifecycle has been undergoing digitisation. With the implementation of European standards, invoicing is becoming the fourth step in the procurement lifecycle to become digital across the EU. eInvoicing follows eNotice (publication of procurement notices), eAccess (access to tender documents) and eSubmission (delivery of bids) steps. It is therefore the first step of the “post-award” phase.

Going digital is a major priority. The Commission supports the digitisation of industry, the uptake of eGovernment solutions and the creation of an EU Digital Single Market. Public procurement represents a large share of the European economy — 14 per cent of the EU’s GDP, or around 40 per cent of public expenditure — and involves more than 250,000 public authorities in the EU and a huge number of suppliers.

eInvoicing is more than sending an invoice in a mere PDF (Portable Document Format) or a scan. It is the automated exchange of an electronic invoice file between a supplier and a buyer. An electronic invoice is issued, transmitted and received in a structured data format. It makes automatic processing possible.

Implementing the European standard on eInvoicing therefore improves and facilitates the relations between buyers and suppliers. It harmonises the information transmitted by suppliers to buyers and provides reference for structured data. In other words, it allows the sender and the receiver of an electronic invoice to understand each other through IT systems and to process the transmitted information.

This represents a significant leap forward not only for the harmonisation of data but also for the interoperability of IT solutions within the EU. As the European economy is undergoing digital transformation, such standards are essential to promote the uptake of digital solutions and remove obstacles within the European Single Market. 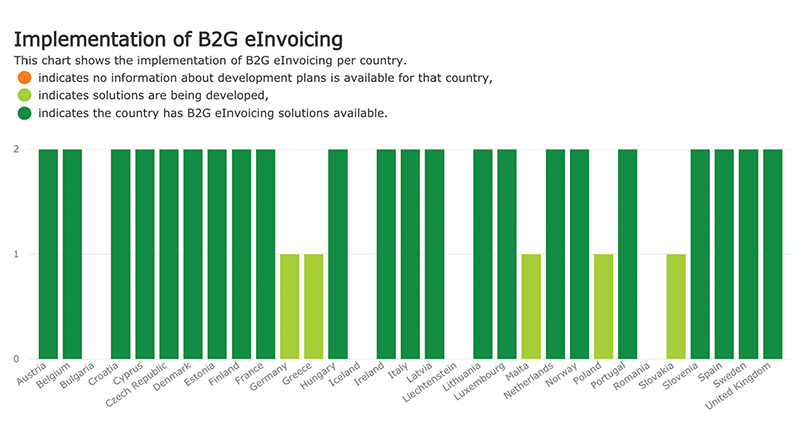 In practical terms, the European standard is a source of simplification and swift payment for businesses. Suppliers can send their invoices to their clients by using a single eInvoicing format, without needing to adjust their sending and/or receiving parameters. It helps to ensure the timely and automated processing by public administrations of the eInvoices of suppliers and payments. It reduces the risks of errors. It also makes it easier for companies to manage their contracts in any EU countries. These are major benefits for SMEs that engage in domestic and cross-border procurement.

Mass adoption of eInvoicing in public procurement will lead to major savings for both businesses and public authorities. The Commission estimates that in the period 2015–2017, the use of eInvoicing by EU businesses resulted in €920 million of savings. For example, in Belgium, the total (sender and receiver) saving per invoice resulting from the move from paper to electronic invoice in the XML format is estimated to amount to €9.391. Digital invoices allow the invoice to be handled and archived more efficiently. This provides significant savings in printing, postage, intra-office routing and archiving. In addition, making the data machine-readable removes the need for manually viewing and reading a visual form of the invoice or the need for the manual work of entering the invoice information into an AP system, saving human resources and significantly reducing errors in data entry. These benefits cannot be reaped with digital images of the invoice such as PDF.

A result of an EU legal obligation

This Directive does not impose any obligation to private sector entities, instead it mandates that member states’ administrations have to accept and process eInvoices compliant with the EU standard that they would receive from their suppliers. This approach means that there is a norm for electronic invoicing instead of a European eInvoicing infrastructure. These infrastructures can be developed as centralised platforms at national level, as it is the case in Italy, Poland or Spain, or shared services like in Ireland. It can also be developed by the market, including eInvoicing solution and service providers. The European standard enables SMEs to set up user-friendly elec-tronic invoicing systems that are easy to understand and easy to use.

State of play and outlook

Although a detailed assessment of the transposition and implementation is yet to be made, the status of implementation of eInvoicing as of 17 April 2019 (for the national level) is shown as follows:

At this stage, the implementation of the eInvoicing standard in public procurement has demonstrated that its impact is not limited to public procurement. It touches upon many IT systems in Member States, such as tax system for example.

As it is the case for any standard, the European standard on eInvoicing is likely to be updated in order to respond to technological developments.