The Economic and Social Research Institute (ESRI) is reporting higher growth for the Irish economy in 2019 than it had previously forecast, but growth is set begin to slow in 2020.

The economy is set to register a 6 per cent GDP increase in 2019, with the ESRI saying in their quarterly economic report for quarter three of 2019 that “certain multi-national related transactions are distorting the headline figures”. However, increasing tax receipts and the continuously strong performance of the labour market means that the foundations of the economy are also functioning well.

Persistent growth is deemed “remarkable” by the ESRI given the political turbulence of 2019 such as the Brexit negotiations and the slowing of the global economy. With the UK leaving the EU and trade negotiations set to be concluded by the end of the year, there will “almost certainly” be “further uncertainty” in 2020, leading the ESRI to predict that the growth rate will fall from 6 per cent to 3.3 per cent.

In their quarterly report for Q2 of 2019, ESRI had predicted an annual growth rate of 4.9 per cent for 2019, but their upward revision of the overall figure has come as a result of a strong Q3 performance by the exports sector. They predict that next year’s slowed growth will be the product of the “deteriorating external environment”. 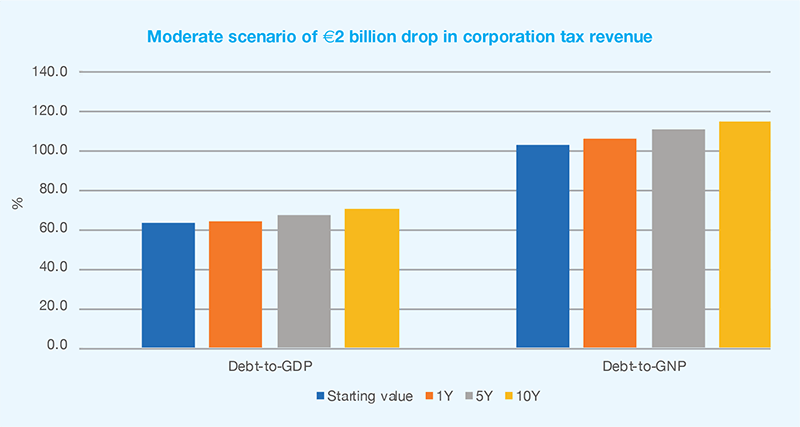 The housing market is said to have been a large component of domestic growth, with the total volume of mortgage drawdowns up 8.5 per cent in Q3 2019 and the volume of drawdowns for first time buyers up 14.3 per cent in the same quarter.

In welcome news for buyers, national price growth is slowing while prices are dropping in Dublin. National prices slowed to 1.1 per cent growth for the year ending September 2019, while Dublin prices dropped by 1.3 per cent in the same period. Rents, however, have seen further rises, increasing by 7 per cent nationally and 7.1 per cent in Dublin year-on-year in Q2 2019.

Tax receipts have increased by 6.9 per cent for the period of January to November to 2019, with income tax receipts up by 8.5 per cent and the “particularly strong” revenue generated by corporation tax, which grew by 6 per cent in the same period. This growth in corporation tax represents a potential challenge for the new government as corporation tax has come to account for an increasingly large proportion of Irish tax receipts.

There is concern, the ESRI say, that a portion of 2019’s corporation tax income comes from windfall revenues, which would make the level collected unsustainable. A sudden reduction in the amount collected would require “significant measures” in order to “maintain fiscal discipline”. The ESRI warns that it is important to build up “fiscal buffers” to absorb any external shocks, which are predicted to only become more frequent, and that it is also important not to use windfall amounts to fund government expenditure.

In the more drastic scenario of the corporation tax receipts falling by €6 billion and returning to early 2010s levels, debt-to-GDP would rise to 84 per cent within 10 years; debt-to-GNP to 138 per cent; 10-Year Government Bond rates would increase to 45 and the surplus-to-GDP rate would fall to -0.2 per cent.

The unreliability of corporation tax, specifically windfall revenue, as a source of income “highlight[s] the vulnerability of the Irish public finances to significant variations in these receipts”. The ESRI state that these results “reiterate the need for the Government to ensure that current expenditure is funded purely on the basis of sustainable elements of taxation revenues”.