Barry Lowry, the Government’s Chief Information Officer for the Department of Puablic Expenditure and Reform, details Ireland’s journey towards digital innovation in government, doing more for the same price and the goal to make Ireland Europe’s number one GovTech country.

“The Government’s strategy for digital isn’t about cost cutting, it is about doing more for the same level of investment,” Lowry explains. “That’s an important challenge for us as we move into an era where we are actively working to encourage more people to use our services digitally. Our ICT strategy is a simple model that outlines how the citizen will be enabled to use digital government services at the time and place of their choosing, and using their device of choice.

“We need to make sure our services are intuitive, look and feel the same and have a single point of access. We need to join up our data, have more shared platforms, get our capability right and get our governance and legal basis in order.”

It has not gone unnoticed by Lowry that the work he has undertaken to create digital fluency in Irish governance has occurred at a time when global governance and technology have made for sometimes uneasy, sometimes too easy bedfellows. “Interestingly, in the last year we have had a robot [Pepper] address the House of Commons in Westminster, which in many ways shows the growing political interest in digital. Liam Maxwell, Government Chief Technology Officer moved to Amazon and Nick Clegg went to Facebook. Any of us in the public sector who can remember trying to educate our politicians on digital and technology for years know that a leading politician becoming part of a tech company is very interesting,” Lowry says.

“We also had the sinister side to technology such as the Mueller Report and the attempts to use technology to influence the most important election in the western world, the election of the President of the United States. Then there is the UK’s decision to leave the EU. We know all the areas where this is going to be a challenge to Ireland: trade, security, agriculture, etc. But technology is also an area where there is going to be a significant impact.”

This impact, Lowry reasons, will not so much relate to the actual technology, but more of the challenge where the UK’s exit from the EU will leave Ireland without the member state which is not only closest but whose culture is the most comparable to our own. “One of the areas where the government officials who spend time in Europe do feel concern is that, with the UK away, Ireland could be peripatetic, not just geographically, but culturally,” he says.

“There was only two parts of the EU using Common Law and who didn’t have a national identity card scheme: Ireland and the UK. Culturally, we are very different from mainland Europe, and I notice it when they’re talking about things like open source software and the digital gateway. They don’t quite understand how agreed approaches might impact on Ireland differently. Culture is going to be one of the biggest challenges over the next few years. You can see that being played out in the newspapers with the ongoing discussions about data sharing across government. We need to use our digital strategy to be more active in Europe and make sure we are assimilated with what’s happening in Europe, because they are so focused on the goal of pan-European digital government which underpins a single digital market.”

Lowry has been leading the march toward pan-European digital government on Ireland’s end. With gov.ie now up and running, and gaining “positive feedback from the users and the press”, he is quick to point to the “encouraging rise” in uptake of MyGovID, the single account that enables users to access services across various governmental departments. Having had 10,000 verified accounts two years ago, the programme now boasts over 410,000 verified accounts.

“Culture is going to be one of the biggest challenges over the next few years… We need to use our digital strategy to be more active in Europe and make sure we are assimilated with what’s happening in Europe, because they are so focused on the goal of pan-European digital government which underpins a single digital market.”

“It is becoming very clear that the public not only understands but supports the direction of travel” he says. “A survey carried out last year by the Department of Employment Affairs and Social Protection found that nearly nine out of 10 people wanted the extension of the use of MyGovID into other areas. We’re now even seeing the public ask why they can’t use their government credentials in banking, insurance and other areas. This is quite common in other parts of Europe and I think it will be an important area of public debate which we will see develop over the next year or two.”

In terms of approach, Lowry says that Ireland’s is “very much aligned” to the Organisation for Economic Co-operation and Development’s principle of “user-driven digital services”, meaning that the Irish Government has been liaising with both users and governmental departments in order to better understand the user’s experience of the Government’s digital offering and make improvements accordingly.

“We are looking at how AI can help people with learning and visual disabilities. We are trying to make the best of cutting-edge technology and use it in government,” he explains. “The digital post box is now being developed. The idea behind this is that a citizen can choose for any important document to be encrypted and copies held in their own personal post box, which means that if one needs to provide them, then they simply provide access via their post box.”

High up on Lowry’s to-do list has been the implementation of both the Government’s Public Service Data Strategy and the Data Sharing and Governance Act. The Act, passed into law in March 2019, was designed in order to make the delivery of services by public bodies more efficient and cost effective by providing a clear legal basis for the sharing of personal data in certain circumstances. The goal for the Act is to reduce the burden placed on the citizen to provide multiple copies of the same information when they come into contact with various governmental departments. 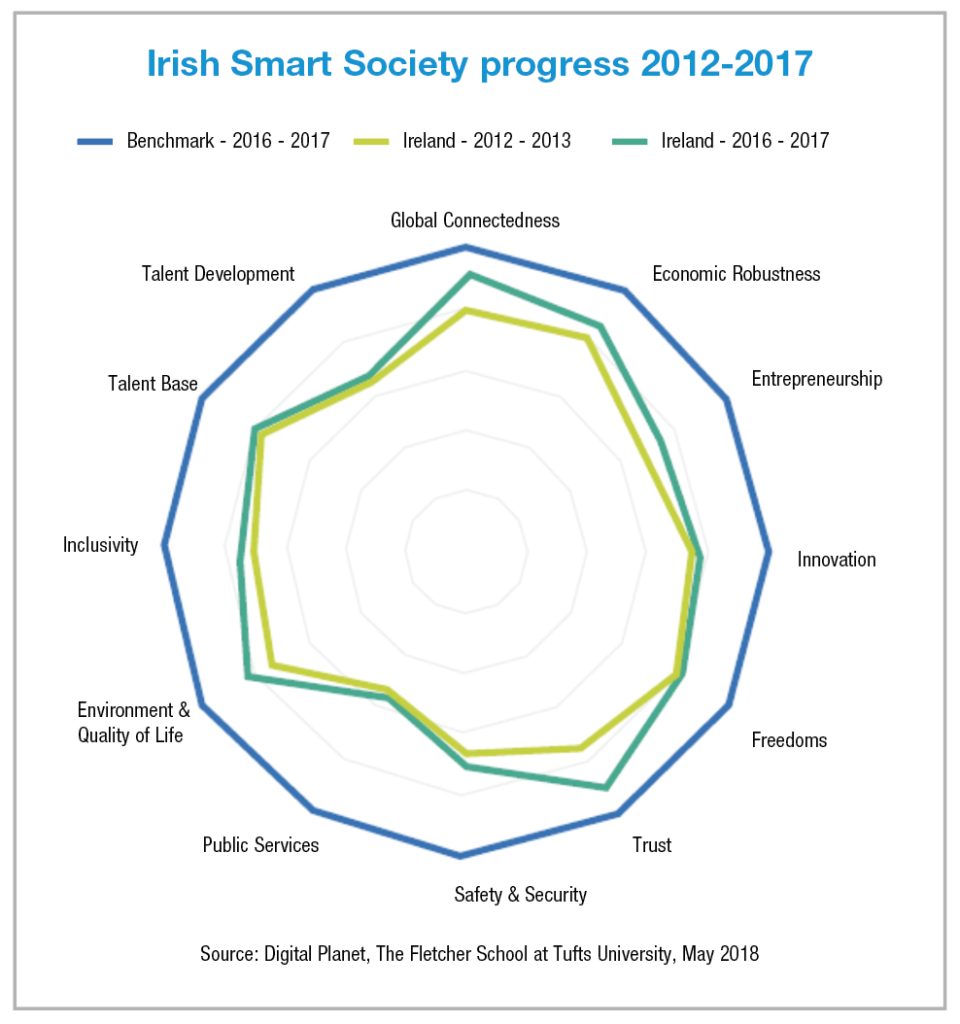 “Our data strategy was approved by government last Christmas and we had a really good workshop recently building out the implementation plan for it and the Data Sharing and Governance Act. We’ve now got a strong legal basis for doing more with our data, which when aligned with GDPR, will enable us to improve services”.

With regard to talent and capability, government has a number of streams of activity in place, including developing a new career structure for staff. “We also now have 34 people in government going through ICT apprenticeships, the first batch of many and we are delighted with that,” Lowry adds.

Lowry is excited by what he sees in terms of unifying the digital approach of Ireland’s public services: “Importantly, not only central government but the sectors: justice, health, education and local government, are setting up digital leadership groups. We are doing that to ensure that everybody in the public service is working together on a common vision and theme which we’ve created together.”

An important aspect of that unified public approach will be GovTech, the process described by Ben Leich, GovTech Lead for the UK Government, as “applying emerging technologies (such as artificial intelligence, advanced sensing, blockchain, advanced data processing, etc.) to improve the delivery of public services through increasing efficiency and lowering costs”. Lowry pays tribute to Minister of State for Public Procurement, Open Government and eGovernment, Patrick O’Donovan TD for his willingness to explore the process.

“One of the great things to happen in the spring was that Minister of State O’Donovan wanted to explore whether the GovTech concept would work in Ireland,” he says. “GovTech is the idea that you bring together government needs, academia and funding, you can create something very agile and powerful for quickly taking new technologies and using them in areas of government need.

“The report of the day will publish shortly and the Minister will be reporting back to Government before Christmas.”

Lowry concludes by outlining the steps that need to be taken in order for that vision to be reached: “We need to figure out a system whereby we can use government challenges to stimulate the start-up system. The view in the room was that there is enough government funding available, but that it’s more about finding out how you get access to that funding and creating easy playbooks to follow. A more cohesive digital talent development model was also asked for, and that meant for everybody in the country. The view is that a lot of the things that would help GovTech are available within the EU Procurement Framework, we just need to make sure that we are using them properly.

“It’s more about developing guidance for how to procure differently for those involved in procurement rather than dramatically changing the rules. Government has to be an exemplar and set the way in terms of our own services. GovTech is a real opportunity for inclusivity, it doesn’t need to be a Dublin-based model. It’s something that everyone in Ireland can use from their place of habitation of choice. We need to get everyone involved in this. We’re all stakeholders in this and everybody wants to drive it forward. People want to say that their company is a GovTech company, which is really encouraging,” he states. 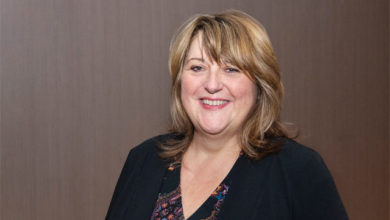