A TD for 34 years, former Government Chief Whip, holder of three ministerial portfolios and founding leader of the Progressive Democrats (PDs); it is impossible to imagine what Irish politics would currently look like without the influence of the recently deceased Desmond O’Malley.

Des O’Malley, a member of the storied Limerick political family, entered politics upon the sudden death of his uncle Donogh who, at that the time in 1968, was the sitting Minister for Education. O’Malley had been chosen after Donogh’s widow Hilda, still in shock at the sudden death of her husband, had turned down the opportunity to contest the byelection necessitated by the death.

Des O’Malley was subsequently elected as a Fianna Fáil TD for the Limerick East constituency in the byelection; perhaps the first sign of the defiance that would come to define his career materialised during the 1969 general election when Hilda asked her nephew to step aside and allow her to contest in the Limerick East constituency as the main Fianna Fáil candidate. O’Malley refused and would come third in the four-seat constituency, with his aunt, running as an independent, coming in fifth.

Following the general election, O’Malley was appointed Parliamentary Secretary to both Minister for Defence Jim Gibbons and Taoiseach Jack Lynch and served as Government Chief Whip. In his role as a confidante of Lynch, the political lines within Fianna Fáil that would put him on a collision course of over 20 years with Charles Haughey, were drawn. O’Malley played a central role in the Arms Crisis prosecutions of Haughey and Neil Blaney in 1970. After their acquittals, the stage was set within Fianna Fáil for a long-term power struggle that would eventually result in O’Malley’s expulsion from the party in 1984.

“His deep commitment to serving the people of Limerick, to the Republic, and to the parliamentary process, since he was first elected to the Dáil in 1968 stands as an outstanding example of dedicated public service, often delivered under great pressure.”

In the meantime, O’Malley’s next position within Lynch’s government came when he was made Minister for Justice after Mícheál Ó Móráin was forced to resign due to ill-health. One of the most significant aspects of O’Malley’s legacy transpired during his tenure as Minister for Justice from 1970 to 1973. In response to the ongoing conflict in the North, O’Malley tried and failed to introduce internment without trial for republicans within the State. He was, however, successful in reintroducing the Offences Against the State Act, which enabled convictions for IRA membership on the word of a Garda Superintendent, and the Special Criminal Court, a non-jury court presided over by three judges which tries cases of terrorism and serious organised crime.

When Lynch resigned the Fianna Fáil leadership following electoral defeat in 1979, O’Malley and Martin O’Donoghue managed the leadership campaign of George Colley, who would subsequently lose to Haughey. Following Haughey’s ascent to leadership, O’Malley retained the industry and commerce ministerial portfolio he had been appointed to following the 1977 general election. 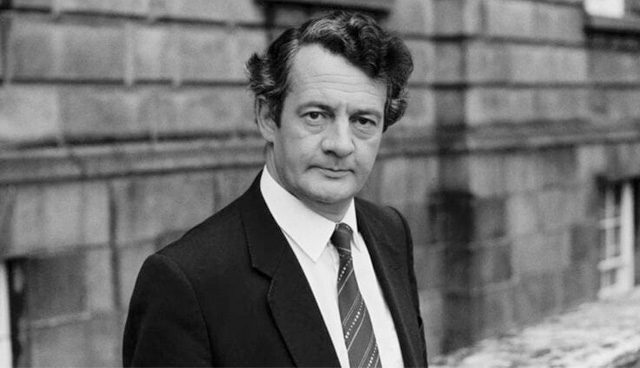 In 1982, after Fianna Fáil lost its majority but stayed in government by virtue of a confidence and supply agreement with Sinn Féin the Workers Party and two independents, O’Malley was appointed Minister for Trade, Commerce and Tourism, but with the death of Colley and the loss of O’Donoghue’s seat, he became increasingly isolated within Fianna Fáil.

After the party whip was removed from him in 1984, amidst inter-party wrangling over the New Ireland Forum, O’Malley was expelled from the party the following year, the final straw being his famous “I stand by the Republic” speech in which he announced his intention to abstain on a vote regarding the liberalisation of the sales of contraceptives, which Fianna Fáil opposed.

O’Malley would go on to establish the Progressive Democrats, joined by Mary Harney (who had also been expelled by Fianna Fáil), and later by Fianna Fáil TDs Bobby Molloy and Pearse Wyse, as well as Fine Gael TD Michael Keating. In the 1987 general election, the PDs won 14 seats, making them the third biggest party in the Dáil. Among those elected were O’Malley, his cousin Patrick O’Malley; Anne Colley, daughter of George Colley; Martin Gibbons, son of Jim Gibbons; Michael McDowell; and Martin Cullen.

“As the founder and leader of the Progressive Democrats he had an influence which went far beyond that party’s period in the Dáil. He showed an ability to work with others on a positive programme and to put to one side disagreements. In doing this he helped set a new course for Irish politics… His was a life of courage and consequence.”

O’Malley’s animus for Haughey did not stop him from entering coalition with Fianna Fáil after the 1989 general election, with O’Malley once again appointed Minister for Industry and Commerce. While in government, he finally witnessed the downfall of Haughey in 1992, when he was forced to resign over the emergence of new evidence concerning his tapping of journalists’ phones in the 1980s. The coalition with Fianna Fáil would not last long under new Taoiseach Albert Reynolds, with the Government collapsing after Reynolds accused O’Malley of dishonesty during the Beef Tribunal.

O’Malley retired as leader of the PDs in 1993, and the party moved into opposition, only to re-enter government with Fianna Fáil in 1997, where it remained upon O’Malley’s retirement from politics in 2002.

While the PDs no longer exist, they are generally credited with the breaking up of the Fianna Fáil versus Fine Gael dichotomy of Irish politics that had dominated since the founding of the Free State. Since 1922, Irish governments had tended to be either single-party Fianna Fáil cabinets, be they minority or majority, or Fine Gael-led coalitions, typically involving Labour. A Fine Gael-Labour coalition was in power at the time of the founding of the PDs, and a single-party government or clear majority has not been won in Ireland since.

Perhaps O’Malley’s greatest legacy is the political reality of Ireland today: the low-tax, pro-business economic policies of the PDs have been the dominant ideology in the State since the 1990s; Sinn Féin, the party most affected by his measures as Minister for Justice, no longer vote against the retention of the Offences Against the State Act and Special Criminal Court; and the current Fianna Fáil Taoiseach Micheál Martin is certainly closer to the O’Malley mould than that of Haughey.

He is predeceased by his wife, Pat, and survived by their six children, four daughters including the former TD Fiona O’Malley, and two sons.