The Fine Gael caretaker government’s response to the Covid-19 crisis outside the immediate world of healthcare has been dominated by their publication of a five-phase exit plan in May and their provision of weekly unemployment payments.

The five-phase roadmap “to ease Covid-19 restrictions and reopen Ireland’s society and economy” was published on 1 May and sought to illustrate how Ireland would reopen in a “slow, phased way”, with the first of the phases beginning over a fortnight after the publication of the plan, on 18 May.

Phases are planned out to progress in three-week intervals, with the situation monitored by the National Public Health Emergency Team and the Government. The guidelines were designed to “keep the level of transmission as low as possible while balancing continuing restrictions proportionally with the positive social and economic benefits which will be brought about by lifting restrictions”.

The guidelines did not only involve the roadmap however, with a framework for government decision-making, a process for engaging with unions and other representative groups regarding the gradual return to workplaces, an updated economic policy response, an updated response on “other pressing societal concerns”, and travel and international co-operation guidelines also included.

Speaking to the Dáil on 4 June, the Taoiseach Leo Varadkar said that there was a possibility of accelerating the roadmap as it had originally been released, folding parts of phase four into phase three and parts of phase three into phase two, with the removal of all travel limits likely. The Government proposal to do so was sent to NPHET and the CMO and while it was said that this would require “significant work”, travel restriction were eased from 20km to anywhere within one’s own county and the reopening of hotels, B&Bs and some retail spaces was brought forward

Immediately following the announcement, the travel distance restrictions that had been in place were slightly alleviated, with the distance people were permitted to travel from their homes for reasons such as exercise extended from two kilometres to five. Social distancing will remain largely the same over the first three phases of the plan, with travel beyond a person’s “home area” only permitted in phase four, which begins on 20 July.

In the first three phases, notable changes occurred in phase one, where small groups were once again permitted to meet outdoors, and will occur in phase two (8 June), where funeral restrictions will be eased and short home visits in small groups will be allowed.

In terms of economic activity and work, the map works up to a phased return to work across all sectors and the continuation of remote working for all that can do so in phase five (10 August). The return to work for vast swathes of the workforce began in phase one, with the phased return of outdoor workers such as construction workers. This is set to progress to limited onsite working “subject to compliance capability” for others in phase two, a return to “low-interaction” work in phase three (29 June) and a return to work for those unable to remotely work from home and the provision of staggered working hours in phase four.

In education, things remain the same in the first two phases of the plan, with childcare provided for the children of essential workers and the opening of schools and colleges for teachers. Phase three will see the phased reopening of crèches and preschools for the children of essential workers; this will be opened out to all children in phase four. Phase five will then see the phased reopening of schools, third level institutions and adult education facilities for the beginning of the 2020/21 academic year.

Retail and commercial activity and cultural and social guidelines follow much the same tack, with outdoor retail and public amenities such as pitches and tennis courts opened up subject to social distancing in phase one. These then progress to the opening of libraries and the resumption of team sports training, along with controlled numbers in retail outlets and the reopening of agricultural marts in phase two. Phase four will see the return of “higher-risk” services such as barbers and hairdressers, along with a return to match action for some sports, including soccer and the GAA. However, GAA President John Horan has cast doubt on the association’s ability to play games while social distancing measures are still in place.

Phase five will see more high-risk services reopened such as tattoo parlours, shopping centres, nightlife spots and casinos. More sports will also return to games, such as rugby, and both indoor and outdoor festivals, along with other mass gatherings will be permitted.

In terms of travel, restrictions on those travelling to and in major urban centres will remain in place until they begin to gradually decrease in phase four. Social distancing and hygiene measures will continue to be observed on public transport throughout all the phases as the numbers permitted onboard gradually increase and specific measures will be in place at ports and airports. In phase five, tourist travel to offshore islands will resume. 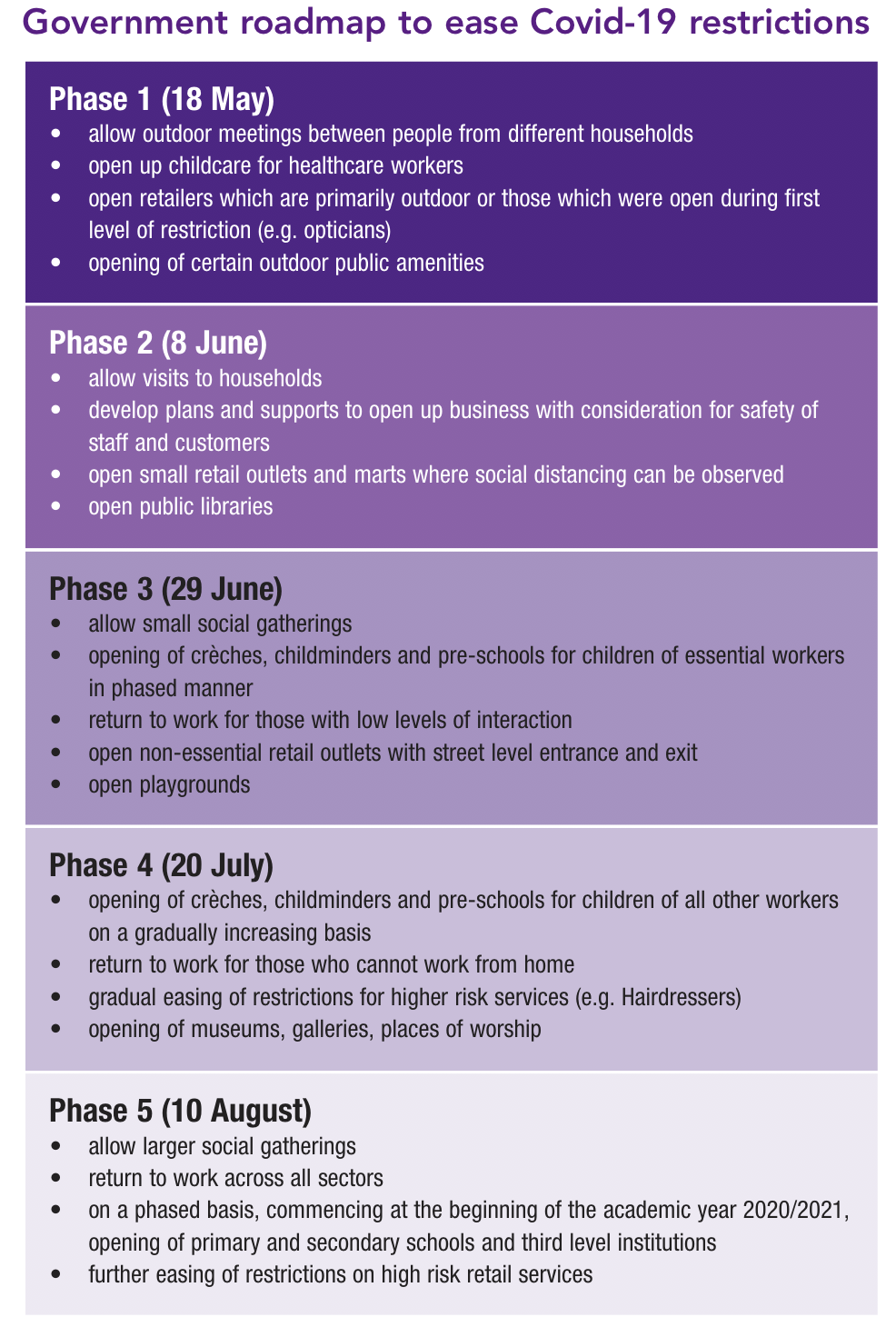 July 2020
Back to top button
Close