A new Economic and Social Research Institute (ESRI) report indicates that even with the extension of the Pandemic Unemployment Payment (PUP) and the Employment Wage Subsidy Scheme (EWSS) until April 2021, the unparalleled job losses triggered by the Covid-19 pandemic will cause a spike in child income poverty in 2020 if the economy does not recover.

Child Poverty in Ireland and the Pandemic Recession, authored by ESRI research analyst Mark Regan and senior research officer Bertrand Maître in July 2020, estimates how Irish child income poverty will evolve in 2020. The research highlights trends in child income poverty during the Great Recession in 2008 and models the effect of Covid-19-related unemployment alongside emergency support payments in 2020.

Upon the report’s publication, Regan stated: “Emergency income support measures, such as the Pandemic Unemployment Payment and the Temporary Wage Subsidy Scheme, have supported families during the pandemic. However, even with these measures in place for the remainder of 2020, we can expect to see child poverty levels rising by an average of one-quarter in the absence of some economic recovery.”

In comparing two scenarios (Scenario A and Scenario B) with a counterfactual No Pandemic Baseline scenario (based on child poverty statistics from pre-Covid-19 Ireland in early 2020), the ESRI research estimates that child income poverty rates are likely to rise.

Indeed, the report states: “The recent surge of unemployment to unprecedented levels due to the Covid-19 pandemic naturally leads to concerns about poverty levels, particularly among children.”

With a global Covid-19-engendered recession imminent or already underway, ESRI baseline scenario projections for Ireland indicated a 12 per cent contraction in the Irish economy in 2020. A significant fluctuation in the labour market saw the rate of unemployment in Ireland increase from below 5 per cent in February 2020 (an historic low) to 24 per cent in Q2 2020 (an historic high). In fact, the CSO recorded an unemployment rate of 28 per cent in April 2020. Consequently, reduced household incomes are likely to impact negatively upon living standards and increase exposure to financial stress.

Conversely, income support measures introduced by the Government, including the PUP and the Temporary Wage Subsidy Scheme (TWSS) will either supplement or potentially increase the household income for displaced workers. As such, the ESRI modelled significant unemployment with emergency support measures to illustrate the net impact on income poverty. In doing so, the ESRI made the assumption that the tiered rate of PUP and TWSS would continue for the rest of 2020. Indeed, PUP has been extended to April 2021 and TWSS replaced with the Employment Wage Subsidy Scheme (EWSS) which will also continue until the same date.

The ESRI paper analyses two scenarios (Scenario A and Scenario B). In each scenario, initial employment losses and emergency response measures are identical. However, in Scenario A, economic recovery does not occur, and displaced workers do not return to work. While acknowledging that this is unlikely, the paper suggests: “It is a useful scenario to analyse as it provides a floor to income losses we can expect households to incur if the present downturn persists through the year.” Scenario B allows for between 61 and 82 per cent of displaced workers returning to work by the end of September 2020.

Within this, the ESRI incorporates the Department of Finance’s projected 7.6 per cent decrease in earnings per employee in 2020. This is modelled by reducing earnings of displace workers returning to work by between 10 and 15 per cent and freezing the earnings of workers who did not become unemployed.

Children at risk of poverty (AROP) and basic deprivation (Deprivation) by socioeconomic characteristics (2008, 2013 and 2018) 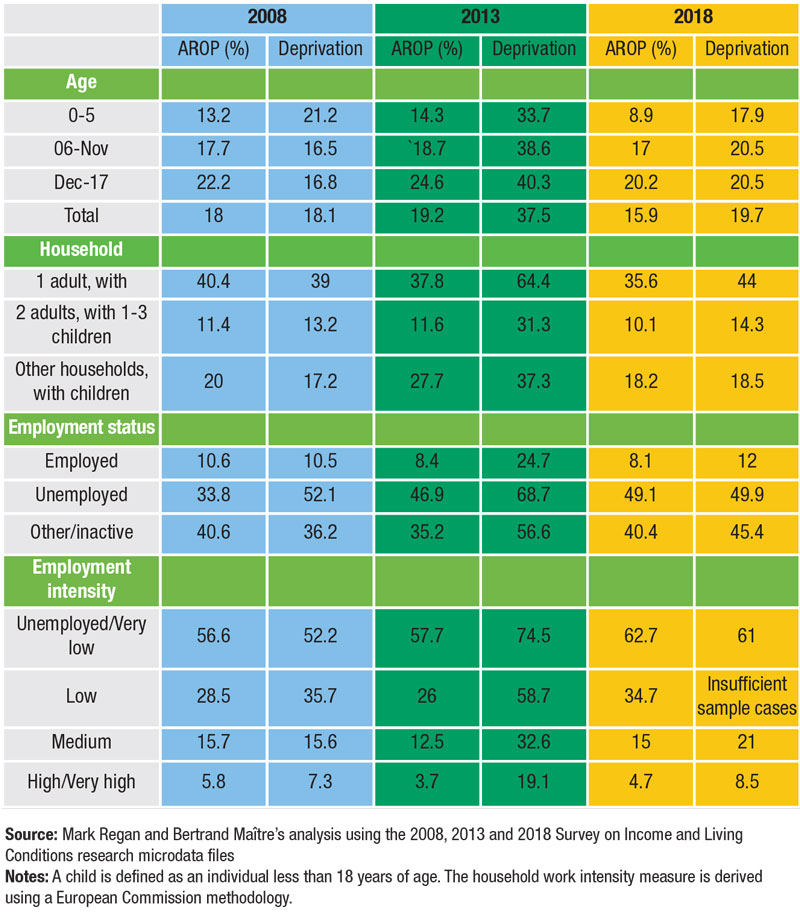 In both scenarios, children living in households with significant loss in income due to unemployment are more likely to experience income poverty. The ESRI advises that “policies which increase the child-dependent components of social welfare schemes or universal increases to child benefit would help to combat these income losses”. However, these income losses could also be offset by decreased childcare and work-related expenditure (though ESRI analysis does not account for this).

Evidence from the Great Recession suggests that employment and higher work intensity are two safeguards against income poverty and deprivation being experienced by children. Likewise, the 2008 experience shows that “non-financial measures of well-being and living standards can further demonstrate hardship brought about by changing economic circumstances, financial stress and a changing composition of household income”.