Seanad Clerk and Returning Officer Martin Groves sits down with Ciarán Galway to discuss Seanad Office functions and priorities, alongside Covid mitigation and plans for the future.

Increasing broadly in line with the expansion of digitalisation since the mid- to late-1990s and the establishment of the independent Houses of the Oireachtas Commission in 2004, the Oireachtas has experienced a significant uptick in activity in recent times.

Amid this proliferation of activity, the Seanad Office is tasked with supporting sittings of Seanad Éireann as well as providing secretariats to three in-house committees: the Committee on Parliamentary Privileges and Oversight; the Seanad Public Consultation Committee; and the Committee of Selection.

“An Order Paper must be produced each day and the procedural materials coming into the Seanad Office and motions tabled by members must be edited and reviewed for compliance with the Standing Orders, issued to members, and placed on the Order Paper,” Groves explains.

“Commencement matters which raise issues of topical interest are accepted daily and between 15 and 20 members might submit a matter which they are hoping to have selected by the Cathaoirleach and taken in the course of debate the following day. These are processed, communicated to departments, and occasionally, there may be questions of standing order compliance which must be dealt with. On a day-to-day basis, that is a significant workload of the Seanad Office.”

Since 2017, it has been headed by Groves as Clerk, assisted by the Clerk Assistant and a support staff of four people, at grades ranging from assistant principal to clerical officer.

“Bridget Doody, the Clerk Assistant is the most important administrative relationship that I have,” Groves asserts, adding: “The Clerk Assistant supports me by managing the Seanad Office staff, while also taking the lead on the day-to-day organisation of the business of the House and the preparation for sittings of the Seanad.”

“My job as Clerk, and the job of the Seanad Office, is to advise the Cathaoirleach and senators on how the Standing Orders should be applied to the business of the House…”

Providing a fundamental basis for the procedural advice imparted to the Cathaoirleach and seanadóirí by the Seanad Office, the Standing Orders of Seanad Éireann are the rules which govern how the business of the Seanad, and its committees is conducted.

“My job as Clerk, and the job of the Seanad Office, is to advise the Cathaoirleach and senators on how the Standing Orders should be applied to the business of the House,” Groves outlines.

“The Standing Orders have been interpreted and applied over time. That has resulted in an evolution of their application. We monitor the way they have developed and consult precedent carefully before making any recommendation.”

In his own role as Clerk and Seanad Returning Officer, Groves has three main priorities. The first, in the context of the pandemic, is ensuring that sittings of the Seanad continue to take place and that they are well run, notwithstanding the obstacles that the pandemic has thrown up.

The second priority is securing adequate resourcing of the Seanad Office. “The resourcing here needs to be appropriate to the job at hand,” the Clerk says, noting: “Managing the day-to-day activity is one element, but I must also secure a good systems development capacity, to help us develop the electoral systems, my part of the Oireachtas Digital Transformation Programme and the Seanad Office’s procedural capacity and skills.”

The third component of Groves’ priorities, as Seanad Returning Officer for the 43 vocational panel seats, is modernisation of the electoral system. “The current electoral systems have been in place for many years and have served us well for a very long time, however, they need to be updated. We have software for the recording and output of results at election counts, for instance, that is approaching the end of its life.

“The Seanad electoral process is quite complex and anything I can do to make that process a little bit easier for all the people who are involved is something that I am interested in.”

Another significant element of the role of Clerk is membership of three statutory commissions. These are: the Standards in Public Office Commission; the Referendum Commission; and the Constituency Commission. 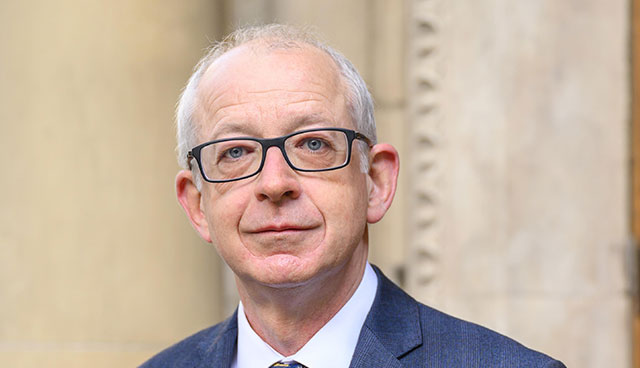 “The Seanad electoral process is quite complex and anything I can do to make that process a little bit easier for all the people who are involved is something that I am interested in.”

In the modern era, the Clerk remains the chief procedural advisor to the Cathaoirleach and the chief recorder of the decisions of the House. Fundamentally, the core role is unchanged, even if some of the broader systems have developed or moved on. At the same time, Groves acknowledges that, as a member of the Management Board of a statutorily independent organisation, “the range and depth of corporate work has increased and because of that, the amount of time that the Clerk must devote to that work has certainly grown”.

Across the public service, the Covid crisis has had a major impact, forcing the adoption of new ways of working that had never been considered before. It had several specific impacts on Seanad Office.

At the beginning of 2020, while the Covid crisis was developing, the Seanad Office was beginning the process of preparing for the Seanad general election; a complex process involving postal votes over a period of several months. “We ran the process as we normally would, but there were several imponderables along the way. For instance, a voter must go to
an authorised person and vote in their presence, so how was that going to be affected? Thankfully, through social distancing and other measures, the system worked successfully. The counting of votes, a five-day process overseen by Groves as Returning Officer, in line with Covid restrictions, was a big logistical challenge.

“Once the election was over, we had to hold the first meeting of the Seanad and we were very restricted in how we could do that. The first two meetings, during which the Cathaoirleach and the Leas-Chathaoirleach were elected, were held in the Convention Centre. Subsequently, we infrequently met in the Convention Centre and Seanad chamber, primarily using the Dáil chamber instead. As such, we had to adapt our sitting schedule to avoid clashes with Dáil sittings,” Groves recalls.

Usual voting arrangements could not operate during the crisis and instead, rollcall votes took place with members socially distanced. This arrangement is still in place, with the intention of returning to electronic voting once the crisis abates.

Meanwhile, a challenge faced by both houses is that servicing sittings is an inherently hands-on, in-person operation. “While staff worked from home as much as possible, it is necessary during sittings to have most of our core staff in the office. Managing social distancing and interactions, while still delivering the job to a high standard, is an ongoing challenge,” Groves observes.

Looking ahead to the centenary of the establishment of the Free State Senate in December 2022, the Seanad envisages a programme of events comprising lectures and exhibitions, culminating in a special sitting to coincide with the centenary on 11 December.

“One of the themes we will examine is the rationale for establishing the original Seanad and the subsequent retention of the Seanad in its current form under the 1937 Constitution. Part of this rationale was to ensure representation for the Protestant or unionist minority and to provide it with assurance at the foundation of the State that its voices would be heard at the centre.

Outlining his vision for a better resourced Seanad Office, with the capacity to not only service the sittings of the House and the committees, but also to take full advantage of technology to improve systems, Groves concludes: “There is an ongoing discussion between the Secretary General of the Houses and myself in terms of reviewing the Seanad Office staffing cohort.

“I would certainly hope to increase the resources available to the Office and to restructure it in a way that allows it to be divided into one group – focused on the day-to-day business of the House and its committees – alongside a project development group. I think we need that capacity and there is an ongoing and positive discussion about that.”

A native of Coolock, Dublin, Martin Groves has been a civil servant for almost 40 years. Having started in the Department of Posts and Telegraphs in 1983, Groves remained with the newly established Telecom Éireann for several years before moving to the Department of Defence in the mid-1980s. In 1992, he joined the staff of the Houses of the Oireachtas and has been there since, working in a wide range of areas including several parliamentary committees, all of the main procedural offices, as well as finance officer, before becoming Clerk Assistant of the Seanad in 2014 and Clerk in 2017.