The Government launched its new Road Safety Strategy 2021-2030 in December 2021. Sam Waide, CEO of the Road Safety Authority (RSA) discusses his organisation’s coordination of what is the initial step towards achieving the elimination of all road fatalities and serious injuries in Ireland by 2050.

“Ireland does not simply want to be a follower among EU member states; it wants to be a leader in road safety,” asserts the RSA’s CEO.

When Waide took up his post in September 2020, the development of the Government’s new Road Safety Strategy was a priority task. Despite the obvious challenges, the new CEO seized the opportunity to lead and coordinate with other agencies, putting his own stamp on the new strategy.

“It is a 10-year strategy which runs up to 2030 and at its heart is Vision Zero, providing for a 50 per cent reduction in fatalities and serious injuries by 2030. It has been a challenge for each of our delivery partners to develop that strategy, particularly in the middle of a pandemic. However, we achieved that and launched the strategy in December 2021 with Minister for Transport Eamon Ryan TD and Minister of State Hildegarde Naughton TD,” he explains.

It is the fifth successive Road Safety Strategy (RSS) published in Ireland since 1998. Over the lifetime of previous road safety strategies, significant progress has been made. Indeed, fatalities on Irish roads have reduced by 70 per cent from 460 in 1998 to 137 in 2021, the lowest number of recorded deaths since records began in 1959.

“To me, 137 fatalities are still 137 too many,” he asserts, adding: “I sincerely and professionally believe that reducing that number of fatalities to zero is possible, but it is only possible with a number of partnerships based and collective actions, not just by organisation and agencies, but by communities and individuals.”

During the development of the new Road Safety Strategy, in line with international best practice, the RSA engaged with delivery partners, including government departments, An Garda Síochána, Transport Infrastructure Ireland, the National Transport Authority, Medical Bureau for Road Safety, the HSE, and local authorities. Likewise, through a public consultation process, in which over 2,000 submissions were received, the Irish public helped determine the trajectory for road safety in the coming decade.

Through this process, the RSA identified three themes which are now at the heart of the strategy.

“Firstly, each agency consistently indicated that we need to share more data to better inform actions which we will implement,” the CEO explains. “Secondly, there was a recognition that while legislation has changed throughout the history of road safety in Ireland, there are significant legislative changes still required to achieve better outcomes. Thirdly, given that a 50 per cent transformation is a significant challenge in any context, a 50 per cent reduction in fatalities and serious injuries will require additional investment and funding.

“Thankfully, over the first phase of the strategy, to 2024, government has committed to a projected €3.8 billion investment. That may sound like a large figure, but on reflection, collisions which result in fatalities and serious injuries cost Irish society the equivalent of €1 million per day,” he emphasises.

“The Safe System approach is internationally renowned and recognised as best practice for road safety. Other EU member states have adopted the Safe System approach and, internationally, the United Nations and the World Health Organisation have endorsed it. All actions contained in the strategy are framed by this approach. We will continue to benchmark against international exemplars so that Ireland can keep pace with these positive developments and ultimately take a lead in some of these initiatives,” Waide outlines. 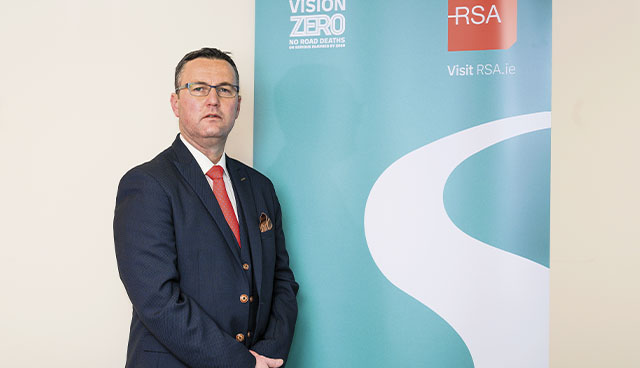 “Ireland does not simply want to be a follower among EU member states; it wants to be a leader in road safety.”

“The world has moved on significantly in terms of utilising technology and engineering and, as such, vehicles have become more sophisticated,” Waide remarks.

“We are moving towards a decade in which vehicles will have enhanced functionality to assist drivers. For instance, Intelligent Speed Assistance (ISA) is a technology which has been mandated for all new cars from July 2022. By 2024, all cars sold within EU member states and the UK will be required to have an ISA feature.”

In the commercial space, manufacturers of lorries and vans are embedding new design and technologies into their vehicles.

“One practical example involves drivers of HGV vehicles, such as lorries, which can struggle to be visually aware of cyclists. As such, new lorries will incorporate windows in the lower section of their doors, enhancing visibility of vulnerable road users, including cyclists and pedestrians, for drivers.

“Onboard and offboard camera technology is also be deployed on buses. Again, this is not necessarily new, but it has proven to be effective in terms of road safety. A recent pilot undertaken by a bus operator in London with offboard cameras applications over a 12-month period demonstrated a reduction in collisions. That is something that is beneficial for vulnerable road users as well as bus operators and their employees,” the CEO adds.

“This is an example of how pathfinder projects can be targeted, tested, trialled, and embedded within the new strategy to enhance road safety for everyone.”

“Ireland must keep pace and align with other jurisdictions across the EU and beyond which alongside proactive education programmes, continue to ensure that there is adequate consequence for inappropriate behaviour on our roads.”

With a primary aim of reducing the number of fatalities and serious injuries on Irish roads by 50 per cent over the next 10 years, the strategy for 2021 to 2030 will be delivered in three phases of:

Published in tandem with the 10-year strategy document, the Phase 1 Action Plan includes 50 High Impact actions aimed at directly reducing fatalities and serious injuries on Irish roads by 15 per cent and 10 per cent, and ultimately by 50 per cent.

While not pre-empting the outcome of the working group on speed limits, which will consider amongst other things the implementation of a mandatory 30km/h speed limit in urban areas, Waide emphasises that Ireland is a signatory of the February 2020 Stockholm Declaration agreed at the Third Global Ministerial Conference on Road Safety. The Stockholm Declaration reiterated the commitment of its signatories to achieving global goals by 2030. On road safety, it resolved to “focus on speed management, including the strengthening of law enforcement to prevent speeding and mandate a maximum road travel speed of 30 km/h in areas where vulnerable road users and vehicles mix in a frequent and planned manner”.

“We know that the majority of serious injuries among vulnerable road users on Irish roads occur in urban areas. The 30km/h default speed limit is a specific action that will help achieve a 50 per cent reduction of serious injuries. As such, one action contained within the strategy is a review of speed limits, including the adoption of 30km/h,” Waide highlights.

On the other hand, the CEO acknowledges that the majority of fatalities on Irish roads occur in speed zones of 80km/h or above. “There are several actions aimed at addressing the challenge of speed on our roads. These include average speed cameras on our roads network, public education in regard to inappropriate and excessive speeding, and an online portal on which members of the public can share dashcam footage. While this may sound pioneering, it is already happening across the world. Indeed, An Garda Síochána already requests dashcam footage of particular collisions. That is important because road users can help identify poor behaviour. Reducing speeding and poor behaviour is a collective effort.” 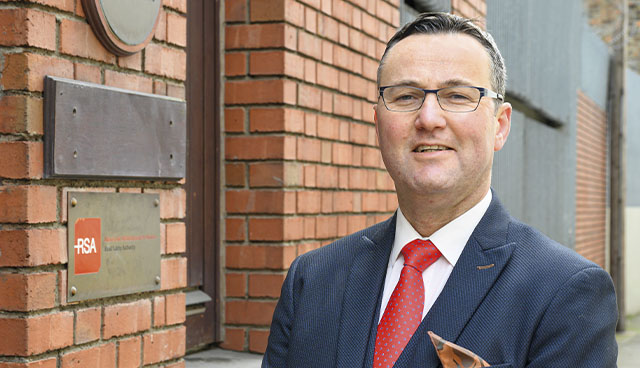 “We now have a governance model whereby the Partnership Board subsequently reports to the Ministerial Committee on Road Safety which is co-chaired by Minister of State Hildegarde Naughton TD and Minister for Justice Helen McEntee TD,” Waide explains.

Given that the strategy is characterised by three phases, this is intended to enable the RSA to reflect and, if necessary, recalibrate at the end of Phase 1 in the absence of timely progress or if new and more innovative interventions transpire that could more rapidly achieve Vision Zero objectives.

Addressing public perception and the consequences for law-breaking on our roads, the RSA CEO highlights a recent survey conducted by his organisation which illustrated that 70 per cent of respondents were supportive of enhanced sanctions as a consequence of killer behaviours such as speeding, using a mobile phone while driving, and drink or drug driving.

“The public perception is very clear and that is encouraging. It indicates the progress that we have made in ensuring that road safety is incorporated into the wider concept of public safety. It is the responsibility of government and organisations to respond to that public expectations around road safety and act to meet them.

“Ireland must keep pace and align with other jurisdictions across the EU and beyond which alongside proactive education programmes, continue to ensure that there is adequate consequence for inappropriate behaviour on our roads”.

Public perception became particularly pertinent during the pandemic, he observes, with a marked increase in vulnerable road users, such as walkers and cyclists, using the roads.

However, the RSA Chief is concerned that on one hand there is an appetite for stronger consequences, while at the same time, the prevalence of poor behaviour endures. “In 2022, we are observing trends which align with pre-Covid figures, including drink and drug driving, and speeding in particular,” he says.

“Although a large majority of Irish people continue to use our roads in a safe and law-abiding manner, persistent poor behaviour is a reality. As such, there must be consequences for these people.”

Summarising, the RSA CEO is determined to ensure that Ireland’s new road safety ambitions is realised. “I am confident that with the necessary data sharing, the legislation required, and adequate funding both for segregated infrastructure and innovation, the 50 per cent reduction by 2030 can and will be achieved.

“For Ireland to achieve Vision Zero road safety targets, by 2024, 2030, and 2050, we all need to consume the message, recalibrate our thinking, develop timely legislation and ultimately deliver safer road use for all,” Waide concludes.

Sam is the Chief Executive and Accounting Officer of the Road Safety Authority (RSA) in Ireland. As part of the Vision Zero 2050 challenge to have zero fatalities on our roads, Sam is leading on the delivery of the Government’s Road Safety Strategy 2021-2030, working in partnership with key agencies to achieve Programme for Government outcomes of 50 per cent reduction in serious injuries and fatalities by 2030. Previously, Waide held the position of Executive Director of Operations and Board Member of the Business Services Organisation within the North’s Health and Social Care Service. Before that, his career spanned the private and public sectors in the UK and Ireland where he has held roles with BMW Group, PWC Consulting, Publicis Sapient Global Markets, and BAE Systems UK. Waide is a Chartered Director, qualified procurement professional and holds a Bachelor of Technology degree, in addition to a master’s degree in engineering and business management.