2019 is set to be a crucial year for the future of Irish agriculture, with the Brexit deadline looming, the impending Common Agriculture Policy (CAP) review and more scrutiny than ever placed on the carbon emissions of Ireland’s most carbon-intense industry. Odrán Waldron talks to Minister for Agriculture, Food and the Marine, Michael Creed TD, about the year ahead and how Irish agriculture will fight these and other fires.

“It’s a strange one,” Creed says of the CAP review from a boardroom in Leinster House, “the way that issue is prosecuted in Europe is that the Departments of Finance and Heads of State determine what the multiannual financial framework is.” With the single payment received by farmers under CAP having depreciated in real terms between 2015 and 2019, Taoiseach Leo Varadkar has expressed a willingness for Ireland to contribute more to the CAP budget, but “the difficulty is that increases in EU budgets have to be done by unanimity and unfortunately there are a number of outlying states at the moment whose critique is that the cuts don’t go far enough”.

“Our overarching priority in the negotiations, which are ongoing, is to have an adequate budget for CAP,” the Minister emphasises. “An adequate budget delivering for family farms, enabling us to enhance our environmental ambitions, addressing issues like generational renewal, which is equally important.”

Generational renewal is especially a worry for Ireland. Central Statistics Office (CSO) figures published in 2018 showed that over half of Irish farmers are over 55 years of age, with 30 per cent of farmers over the retirement age. From 2013 to 2018, the number of farmers under 35 fell from 8,200 to 7,100. When asked what the country is doing to address this problem, Creed is honest: “You could say not enough, but then we’re probably being hard on ourselves because this is a global phenomenon.”

Studies suggest that food production will have to increase by at least 25 per cent and as much as 70 per cent between now and 2050 to deal with the world’s growing population, As a country that exports 90 per cent of its produce, Ireland’s farming future could be one of great prosperity, but that will depend on there being farmers to assume the responsibility of that production. “In the context of demand for more food production, we need to be conscious of the fact that to do that we will need to attract young people into the industry,” the Minister says.

“The headline figures in terms of age profile are really damning, they speak volumes as to what young people think of the industry, but if you break down the figures, most young farmers head for dairy sector because that’s where the best economic returns are.”

The CSO figures also found that the number of farms in Ireland had declined by 2,100 to a total of 137,500 between 2013 and 2018, painting a picture of a generation slowly deciding that the economically unreliable sector of agriculture was not for them. To address this issue, Creed says that the Government can do any number of initiatives but must assuage the one core concern: “We can have tax incentives, land transfer initiatives, partnership arrangements, all of those measures the Department currently has to install young farmers. Until we can give people reasonable assurance that there will be a living for them comparable with what they can get in other career opportunities, we’ll continue to struggle in this area.”

The Government, Creed says, is working to “build up resilience in the sector”, through pumping “funding into various schemes, Areas of Natural Constraint schemes, additional resources into Bord Bia”. The Government and his Department are “directly interfacing at EU level, as represented in contingency documents published by the European Commission. The value of that will become clear once the impact of Brexit is clear.” 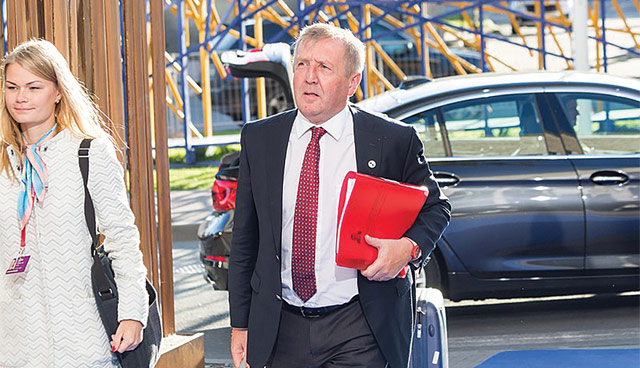 “The headline figures in terms of age profile are really damning, they speak volumes as to what young people think of the industry.”

It is the elephant in the room any time any Irish industry is discussed, but Brexit looms especially large over Irish agriculture. The prognosis for Irish agriculture after Brexit is bleak at best, a reality that Creed faces up to: “Every study that has been done on the impact of Brexit on the Irish economy shows that it’s a damage limitation exercise.” While uncertainty and indecision reigns in Britain, a hard Brexit, the worst possible outcome for Irish trade, becomes more likely.

“A hard Brexit, with our access to the UK market compromised could be devastating for agriculture,” the TD for Cork North-West admits. “50 per cent of our beef production displaced has huge consequences, not just for our 75,000 beef farmers, but for those in the processing sector. 80,000 tonnes of cheddar cheese from the dairy industry, almost all of our mushroom exports, a substantial proportion of our pork exports. The consequence of that market, in which we have invested so much time and money, being closed off to us is devastating.”

What Ireland wants has been one of the main sticking points during Brexit negotiations, with the EU and Ireland unwilling to entertain the notion of anything other than full regulatory alignment between the Republic and Northern Ireland, an unacceptable proposition for elements of the Conservative Party and the DUP.

Creed backs the hardnosed approach, saying that the Government’s “ambition has always been unapologetically to retain as close a relationship as possible with the UK, bearing in mind that if they’re outside the customs union, it can’t be as good as what we had”. Trade alignment is the important aspect of Ireland’s future relationship with Britain for agriculture: “That for us is where the meat in this is, if you’ll pardon the pun. That will determine what beef will get into the UK. That future trading relationship won’t be as good as what we currently have and no level of preparations will mitigate all of the downsides of Brexit.” 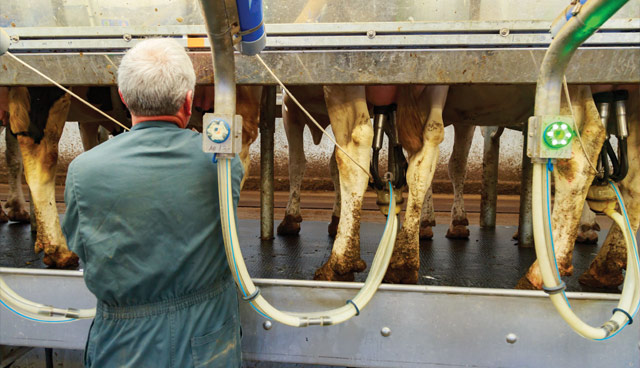 “Every study that has been done on the impact of Brexit on the Irish economy shows that it’s a damage limitation exercise. A hard Brexit, with our access to the UK market compromised could be devastating for agriculture.”

If Brexit is a crisis at the administrative and political level, disaster also threatens at agriculture’s physical level, in the environment. Ireland will miss its emissions targets for 2020, as set out by the EU Renewable Energy Directive, and Creed says that “to meet our 2030 targets is very challenging”.

That agriculture, which accounts for 33 per cent of Ireland’s emissions, is regularly blamed for Ireland’s climate change performance is not lost on the Minister. “The potential for reducing our emissions profile in agriculture is limited,” he says. “We’re adopting a three-strand approach to climate change, which is to maximise the efficiencies in our production system. For every unit of food output, we want to reduce the emissions around that. Then sequestration and afforestation will maximise the opportunity to take carbon out through appropriate land use. The third strand is to displace, as much as possible, non-renewable energy sources through the use of anaerobic digestion, solar panels, biogas and other renewable sources.

“It’s interesting to put it all in context, here [in Ireland] it’s just pointing the finger and blaming agriculture for making up 33 per cent of emissions. I’ve often made the point that if you could move Irish agriculture to one of the bigger industrialised countries in the world, our emissions would be lower than theirs and lower than their total output. That is not a plea for an exemption from meeting obligations because it’s the right thing to do by future generations.”

There are, as Creed points out, other reasons to reform Ireland’s dawdling performance: “Increasingly in a food island that’s export-orientated and looking for new markets, the market is asking what is your emissions profile? The constructive CAP post-2020 is really important for us because it will give us the toolbox to drive change inside the farm gate.”

Reducing emissions while increasing production sounds oxymoronic and Creed seems aware of the unique challenge the problem poses. “The strategic question that has to be asked is: who are the people who will produced that food?” he asks. “It’s logical to say if we can be the most carbon efficient producer of any food type, is it not better that we would be allowed to produce that?

“Our challenge is to produce more food and to do it in the most environmentally sustainable way possible. Food Wise 2025 talks about increasing our exports significantly, but we must ensure that we are doing that better than anybody else is doing that: better quality; better traceability; lower carbon footprint; and doing so in a manner that’s the most sustainable for farm families economically.”

Ireland exports 85 per cent of its dairy produce. There are 18,500 family-owned dairy farms producing roughly 5,400 billion litres of milk per year and bringing in export values exceeding €3 billion. The sector is “fully cognisant of the fact that if they don’t up production in a sustainable way, the market may not respond for them. We export to 180 different countries, we have to be in tune with what the market demands”.

The ways in which we tackle such a mammoth task in sustainable fashion are manifold: “Simple things like making sure the dairy herd is efficient, milk recording, soil analysis, low emission slurry spreading technology, increasing the application of lime thereby decreasing chemical fertilisers, improving the herd so we’re getting more from less cows.”