The Minister for Justice Heather Humphreys TD published the mid-year progress report for the Justice Action Plan 2021 in August, showing that 71 per cent of the actions scheduled for the first six months of 2021 had been completed, with 39 actions yet to be completed.

“We are moving at pace on our ambition to build a justice system that works for everyone and deliver on our strategic goals and ambitions. I look forward to seeing and feeling the impact of this transformative work on the justice sector and the people who interact with it. I am pleased to report that of the 132 actions examined, 71 per cent or 93 are achieved,” Humphreys said upon publication of the report. “2021 has not been without its challenges, and it has been necessary to readjust the timelines for some actions, but I am confident these will be delivered soon.”

The Justice Plan 2021 is the first in a series of annual plans that will set out actions in order for Ireland to “build a justice system that works for everyone”. The plan contains 230 actions for the entirety of 2021, of which 132 were scheduled to be completed in the first six months, but as Humphreys stated, 71 per cent of these were achieved, leaving 39 unfinished, adding to the 98 already scheduled for the final six months of 2021.

For the remainder of the year we will strive to implement the ambitious reforms begun this year and to build a justice system which contributes to the improvement of society for everyone.”

4 per cent, or six, of the actions are classified as ongoing, meaning that “while these actions are on track and no issues are arising, the nature of the action is that work will continue throughout the year to ensure its successful delivery”. 33 actions, 25 per cent, are defined as not yet achieved, meaning that despite the fact that “significant progress has been made on many of the outstanding actions, work is required to bring these to completion”.

The “significant achievements” that have been achieved in the first half of 2021 are outlined within the report, with 22 actions outlined. The actions mentioned include: the commencement of Coco’s Law, which criminalises the distribution of intimate images without consent; continued implementation of Supporting a Victim’s Journey: A plan to help victims and vulnerable witnesses in sexual violence cases; publishing the General Scheme of the Policing, Security and Community Safety Bill, which provides for wide-ranging and coherent reform of policing “by improving the performance and accountability of policing and security services, and supporting the human rights of all people throughout Ireland to be and to feel safe in their communities” and will support implementation of A Policing Service for the Future to reform policing in Ireland; and the establishment of pilot community safety partnerships in Dublin, Longford and Waterford.

The Department of Justice has also: agreed to set up a Community Safety Innovation Fund that will assist An Garda Síochána and the Criminal Assets Bureau in seizing the proceeds of crime and “will fund projects communities themselves know will help in improving their safety”; published the Drogheda Implementation Plan, outlining 70 actions to improve community safety and wellbeing in Drogheda; enacted and commenced the Criminal Justice (Perjury and Related Offences) Act 2021 to establish a statutory criminal offence for perjury and related offences; and commenced the development of a scheme to regularise the immigration status of thousands of long-term undocumented people and their dependents, with the scheme expected open by the end of 2021.

Work has also continued on the Family Law Bill to overhaul and modernise family law and the courts; the Parole Board was established on an independent statutory footing; the Personal Insolvency (Amendment) Act 2021 was enacted, making “urgent changes” to the Personal Insolvency Act 2012 to help those struggling to pay debts to have more access to insolvency processes; hate crime draft laws were published; an independent audit conducted on how responsibility for domestic, sexual and gender-based violence is segmented across different government departments and agencies was published; and a temporary system that enables applicants to complete their naturalisation process by signing a statutory declaration of loyalty to the State was commenced. 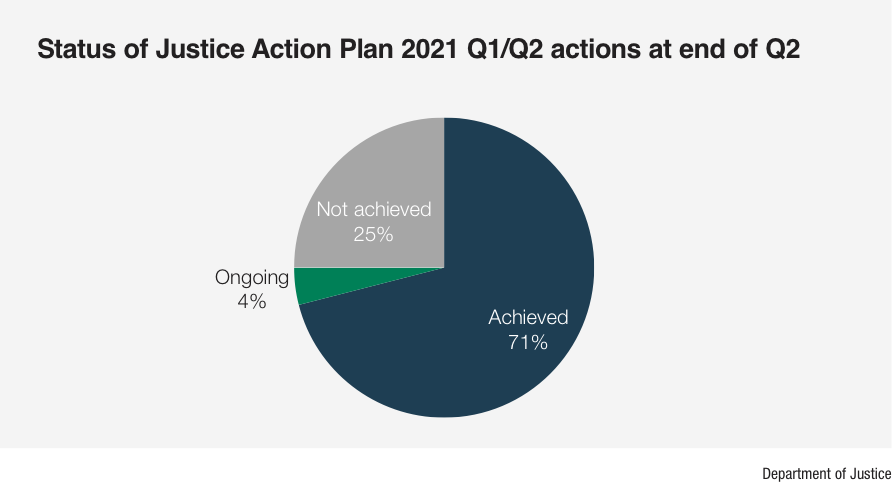 The targets of the 2021 plan are broken up into five goals: tackle crime, enhance national security and transform policing; improve access to justice and modernise the courts system; strengthen community safety, reduce reoffending, support victims, and combat domestic, sexual and gender-based violence; deliver a fair immigration system for a digital age; and accelerate innovation, digital transformation and climate action across the justice sector.

When broken down by their goals, just two of the 39 actions not achieved on schedule belong to the first goal of tackling crime, five belong to the second goal of improving access to the courts system, 12 to the third goal of strengthening community safety, 11 to the fourth goal of delivering a fair immigration system, and one to the final goal of digital transformation. The failures are perhaps most concentrated in the fourth goal of addressing the immigration system, where the 11 actions yet to be achieved account for nearly half of the 25 actions scheduled to have been completed in the first half of 2021. While there were 12 failures under the goal of strengthen community safety, there were 34 actions under this heading overall, meaning that 22 are on track.

“For the remainder of the year we will strive to implement the ambitious reforms begun this year and to build a justice system which contributes to the improvement of society for everyone,” Minister Humphreys writes in her foreword to the report, the first to come in a series as part of the Department’s A safe, fair and inclusive Ireland strategy, which runs from 2021–2023. The progress detailed within is of course to be welcomed, but it will be some cause for concern that the Department is, within the course of one biannual report, already playing catch up. 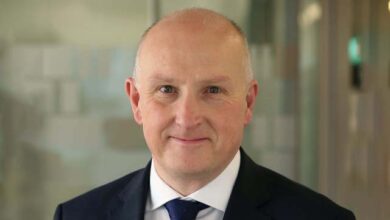 Laying the foundation for sustainable transformation 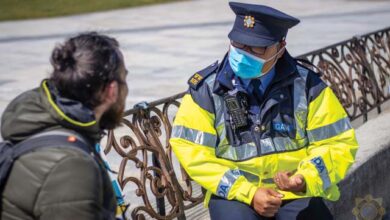 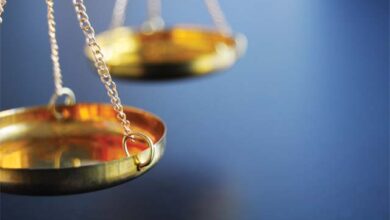 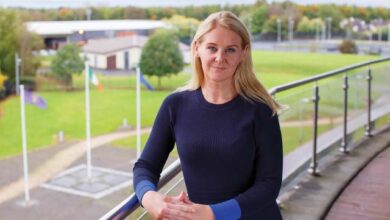